She was a huge part of lgbt history who has been unfortunately forgotten. But during her time, very few could outdo Gladys Bentley: 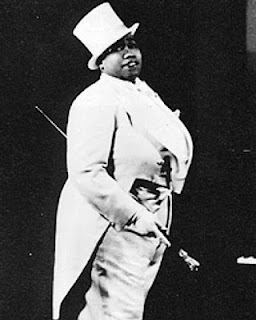 Gladys Bentley was born on August 12, 1907. She was the eldest of 4 children born to a Trinidad born mother, Mary Mote (Bentley) and an American born father, George L. Bentley. Gladys left home at 16 years old. Like many African Americans of her generation she ended up in New York City's Harlem, the capital of "The New Negro ". For Gladys, her lesbianism made her need to strike out on her own all the more urgent. As she would recall many years later in an Ebony Magazine Article, "It seems I was born different. At least, I always thought so....From the time I can remember anything, even as I was toddling, I never wanted a man to touch me...Soon I began to feel more comfortable in boys clothes than in dresses".

Bentley left Pennsylvania at 16 to be part of the Harlem Renaissance and come out as a bulldagger. She began singing at rent parties and buffet flats and moved on to speakeasies and nightclubs. later she would headline the popular speakeasy the Clam House as well as the Ubangi Club.

She wowed audiences with her powerful voice and obscene parodies of blues standards and show tunes and was famous for her glamorous girlfriends. Very open about her sexuality, Bentley also performed at lesbian bars and once told a gossip columnist she had married a white woman while in Atlantic City, New Jersey.

In the 1920s a large part of the elegant town houses and apartment buildings in both Harlem and downtown in Greenwich Village had been converted into cheap rooming flats. In both neighborhoods, artists and intellectuals flocked to this cheap housing in beautiful surroundings. In both neighborhoods, amongst all this creative talent, there was a large Homosexual population. In Harlem this great creative outpouring was also a celebration of optimism about the future of Black America. This era would later be known as The "Harlem Renaissance". The list of gay men, lesbians or bisexuals amongst the "Harlem Renaissance" is more or less a guide to many of the most talented people of the era. Langston Hughs, Countee Cullen, Wallace Thurman, Bessie Smith, Ethel Waters, and Moms Mabely just to name a few. Audiences of the prohibition era were always craving something new. There was a "Vogue of the Negro" , accompanied by a curiosity for "Pansy Acts" and "Hot Mama" lebian or bisexual singers.

Read more »
Posted by BlackTsunami at 3:55 PM No comments:

'Milbank calls out Romney, Ryan for kissing up to Family Research Council' and other Friday midday news briefs

‘Values’ voters Romney and Ryan don’t need - Perhaps Washington Post writer Dana Milbank realizes that his defense of the Family Research Council from the designation of "hate group" sent the wrong message because today, he not only rebukes them but also Romney and Ryan for kissing up to them.

#VVS12 live tweets - For your bulimic edification, Jeremy Hooper is tweeting from the Family Research Council's awful "Values Voters" summit. So far, Michelle Bachmann came very close to calling President Obama a traitor and Jim DeMint called teachers "thugs." And you just know they are going to have "interesting things to say about the lgbtq community.

NOM didn't have a good night in NY (despite what the spin machine might sputter forth) - According to reports, NOM wasted a rather pretty penny last night in its unsuccessful long strategy of destroying marriage equality in New York.

Sometimes pictures say more than words could ever convey. These two pictures from an Obama rally in Colorado are a prime example: 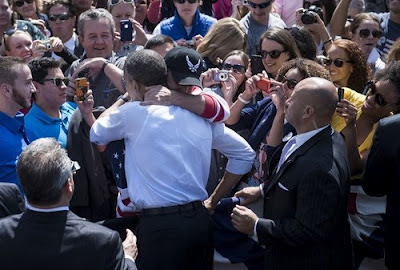 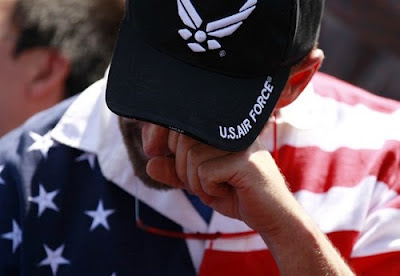 The pictures came from AfterElton.com, which also says:


Ricky Watson of Littleton, Colorado wipes tears from his eyes after he thanked President Barack Obama for repealing “Don’t Ask, Don’t Tell” at a campaign rally in Golden, Colorado, September 13. Watson was kicked out of the Air Force 25 years ago for being gay.

Posted by BlackTsunami at 4:46 AM No comments: