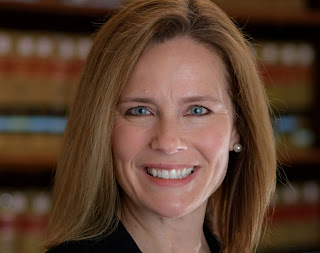 There are so many issues which the media can pull from the Amy Coney Barrett hearings.  But sadly, one is being overlooked. Barrett has a relationship with anti-LGBTQ group the Alliance Defending Freedom. and the media is being rather lackadaisical about exploring it.

One prominent publication, Mediaite, framed it as such:

Barrett spoke five times beginning in 2011 to students participating in the Blackstone Legal Fellowship, a program operated by the Christian legal group Alliance Defending Freedom, The group has successfully litigated cases before the Supreme Court including Masterpiece Cakeshop v. Colorado, in which the court ruled that a Colorado baker could not be legally compelled to make a cake for a gay wedding.

Democrats widely disdain the organization and have sought to raise doubts about Barrett’s qualifications in connection with her past speeches. Hawley suggested Democrats were seeking to make Christians “second-class citizens.”

“Are you aware of anything in the Constitution or our laws that say that it is a disqualification for office for a believer of religious faith to go and lecture to law students of a similar faith, in her area of expertise?” Hawley added, addressing Barrett. “I want to be careful that I’m not veering into answering hypothetical questions, but I certainly don’t think there was anything wrong with my going to speak to a group of Christian law students about my expertise,” Barrett replied.

The article is missing a lot of context and comes across as dismissive. Here are details it should have included.

Barrett apologizes for calling sexual orientation a 'preference' - She may get the SCOTUS seat, but Mrs. Barrett learned on Tuesday.
Barrett dodges on same-sex marriage, downplays ties to anti-LGBTQ law firm - Speaking of which.
New Department of Education co-chair said conversion therapy is “psychologically beneficial,” affirming trans kids is “diabolical” - Trashy.  These people have no place working in our government.
Trump supporters in battleground states largely favor LGBTQ rights, poll finds - So they say. A little lie about gays and children or gays and religion and they will turn.
Posted by BlackTsunami at 8:44 AM No comments: