The lgbt community hasn't forgotten what you did in Indiana, Mike Pence

So according to the incoming Vice President Mike Pence, the first order of business will be "repealing and replacing" Obamacare, with a heavy emphasis on repealing but short on details about replacing. I don't think it's going to be as easy as they think.

It's interesting that it was Pence who led the press conference talking about this and not Trump. It sends the message that Pence will be doing the legislative work while Trump basks in the "glow" of being president. Not surprising.

And even though all eyes will be on the battle over Obamacare - and a few others - I want to let Pence know something:

The lgbt community hasn't forgotten what you did in Indiana. 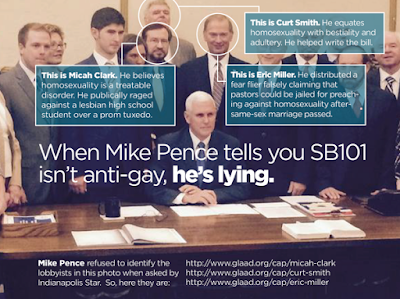 For those who have forgotten, check out this article from 2015 which basically breaks down how Pence was caught in a HUGE anti-lgbt lie about his homophobic "religious liberty" bill:

And then let's not forget Pence's attempt to defend the law on This Week, which went over like a lead balloon:

We know that a national anti-gay "religious liberty" bill will be coming. Don't think we aren't ready.
Posted by BlackTsunami at 9:18 AM No comments:


As it has done for eight years, the anti-lgbt hate group The Family Research Council recently attacked the Obama Administration for the work it has done to advance the cause of lgbt equality.

In its daily Washington Update, the organization listed several accomplishments of the State Department under the Obama Administration  concerning the lgbt community while attempting to unsuccessfully make these accomplishments sound like blemishes:

. . .Obviously, America has a sincere interest in stopping the unjust persecution or targeting of any human being. But what's happened for the last eight years is not the simple defense of those who are mistreated -- it's the elevation of people around the world based on sexual behavior.

While some people are falling for the line that social issues are "irrelevant" to the work of the State Department, the Trump team isn't buying it. They're keenly aware of the culture of extremism at the agency -- so much so that they've requested a detailed list of the ways the office has tried to promote "gender equality." Late last month, the New York Times reported on the Trump memo, which asked the department to provide, among other things, details on the positions "'whose primary functions are to promote such issues' -- as well as how much funding was directed to gender-related programs in 2016."

The State Department's report should be an easy one. After all, the White House has graciously done the work for them, boasting in great detail about the "gains" it's made for the global LGBT community on its website (many courtesy of the agency that supposedly has no dealings in social issues). Here are a few of the highlights (and some the administration conveniently forgot):

Here is my question - just what is wrong with these endeavors? Seriously. What's wrong saying that gay rights are human rights or promoting the idea? And what's wrong with opposing any effort by foreign countries to deny visas for spouses of American staff? What's wrong with flying the rainbow flag at OUR embassies? What's wrong with defending the rights of lgbts who may live in countries where homosexuality is punishable by death or imprisonment? Where lgbts butchered and beaten to death by homophobes without any reprisal?

Nothing, except to the Family Research Council, these acts are wrong because they are supposedly "elevating a sexual behavior?

FRC tries to pigeonhole us in terms of sexual behavior to the point of crying "bloody murder" to any entities -  be it the Obama Administration, the State Department, or the lgbt community itself - who refutes the organization's insulting attempts to define us.

The State Department under the Obama Administration was clearly engaged in protecting the right of lgbts Americans as they went abroad and standing up for the worldwide lgbt community, particularly in areas of the world where they have been persecuted.

Again I ask what is wrong with that? Clearly the Obama Administration should be applauded for its very important and much needed assurances to the lgbt community that we shouldn't be treated or judged as less than human. At the same time, the Family Research Council should be asked why it seems to be so consumed with judging lgbts on supposed sexual behavior that it refuses see us as human beings.

And FRC's stance has to be taken into account seeing how the organization already has influence in the incoming Trump Administration.  If FRC thinks that defending lgbts abroad is wrong, one can only guess how calamitous its influence on Trump's policy regarding lgbt equality in general could be.