Dear Family Research Council, repetition does not turn a lie into truth


An annoying, but enduring tactic of anti-LGBTQ groups is to repeat a lie consistently no matter how many times it has been refuted.

A good example of this is yet another Washington Update by the Family Research Council praising Trump for his latest attempt to ban transgender men and women from serving in the military.

I will spare you the nauseating entirety of the kiss-up because I wanted to point to the follow excerpt:

For this White House, rolling back Obama-era extremism is nothing new. President Trump has been doing it for the better part of 14 months. But doing the right thing isn't always the easiest thing, and the media is doing its best to make the administration's reversal of the Pentagon's transgender policy sting. Lucky for us, Donald Trump isn't bothered. With the military on the brink, staring down a $3.7 billion price tag for service members' sex changes, President Trump decided it was time for a return to common sense. And plenty of Americans are lining up to thank him.


That $3.7 billion price tag comes from FRC itself. Supposedly, the organization claims that it reached this amount by using "pro-LGBT" resources.

With all due respect to FRC, it doesn't exactly have a history which lends to affirming its credibility when it comes to using data. In the past, the group has cherry-picked information from pro-LGBTQ sources and legitimate science or relied on junk science  to reach false (and negative) conclusions about the LGBTQ community.  Remember that FRC's lies are so numerous that the Southern Poverty Law Center designated it as a hate group.

I'm old school about this sort of thing. If a person or group has demonstrated a propensity to lie about a certain issue, I'm generally not going to believe any future claims they have about said issue.

In reality, the Pentagon commissioned a study about this subject in 2016. According to Fortune magazine:

The study, conducted by the Rand Corporation, estimated that there are between 1,320 and 6,630 transgender individuals on active duty in a force of 1.3 million people. The cost of providing those individuals with specialized health care, including possible surgeries, would be between $2.4 million and $8.4 million a year. Total military health-care expenditures were $6.27 billion in 2014.


In all fairness, Fortune magazine also points out that Defense Secretary Jim Mattis criticized the RAND study, claiming that it “heavily caveated data to support its conclusions, glossed over the impacts of health care costs, readiness, and unit cohesion, and erroneously relied on the selective experiences of foreign militaries with different operational requirements than our own.”

But in July of last year, Reason magazine pointed out another study which, while not coming to the exact numerical figures as the RAND study, backed up the belief that the cost of allowing transgender troops to serve is nowhere remotely near $3.7 billion:

A New England Journal of Medicine study from 2015 found slightly less than 13,000 transgender service members and transition-related care amounted to between $4.2 million and $5.6 million per year. The military's annual health-care budget is around $48 billion a year. Those numbers are small enough on their own, but they shrink even more when put into context of other medical expenditures. For instance, the Pentagon spends about $42 million a year on the erectile-dysfunction drug Viagra and another $23 million on Cialis. According to one estimate, the Navy spends $115 million a year simply to transfer pregnant women from active duty back to land.


So who should you believe? Two groups with pretty much no credibility issues about this subject or a faux Christian organization which is infamous for lying about and denigrating the LGBTQ community to the point of being designated as a hate group?

In a reasonable society, this wouldn't have been a question anyone would have to ask.
Posted by BlackTsunami at 4:35 PM No comments:

'Should 'ex-gay' therapy be considered a religious liberty of churches?' & other Wed midday news briefs 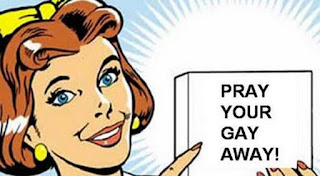 Bethel comes out against LGBT bills pending in state Legislature - A church in California is sounding the alarm against pro-LGBTQ legislation, especially a bill which cracks down on fraudulent ex-gay therapy. Mark my words. Claiming that churches have a religious right to push ex-gay therapy (no matter how fraudulent it is) has potential to be the next "religious liberty" argument. To me, saying that a church should be allowed to push "ex-gay" therapy on the basis of religion is like saying churches can prevent people from being treated for ailments on the basis of religion. Both are wrong.

Trump’s transgender military ban prompts mental health experts to clarify the science - More nails in the coffin of Trump's ban on transgender troops? I'm all for it.

LGBTQ Org GetEQUAL to Close Amid Financial Troubles and Storm Over High-Profile Firing - I was never that much of a fan but in terms of the advancement of LGBTQ equality, credit must be given where it's due.

Trump Administration Creates an Office of Discrimination - This opinion piece asks a wonderful question - "Why is it that 'religious freedom' only comes into play when a woman or gay person is involved?... Is it really just a coincidence?"
Posted by BlackTsunami at 9:13 AM No comments: