Religious right figures giving misleading testimony during Congressional hearings isn't a new occurrence, but this one needs to be shouted about from the rooftops.

According to Equality Matters, the witnesses speaking for DOMA (the Defense of Marriage Act) during the April 15 Congressional hearing gave incorrect testimony on several occasions. I invite everyone to take a look at the section, but the one which stands out for me is a statement made by the National Organization for Marriage's Maggie Gallagher.

She claimed that social science proves that the best place to raise children are in homes with biological, married parents as opposed to same-sex households:

GALLAGHER: From what we know from the social science evidence, marriage protects children to the extent that it increases the likelihood they are born to and raised by their own mother and father in a low-conflict, enduring relationship. We know this because, frankly, children do not do better under remarried parents than they do with solo mothers on average, which means that it is not simply a set of legal benefits that we can transform. It is the extent and way to which marriage as a legal and public institution helps to protect a particular kind of family that it helps to protect children or fails to protect children.

However, according to Equality Matters, in her written testimony, Gallagher cited a study on heterosexual single parents:

We know this from the social science evidence showing that children do no better, on average, in remarried families than they do living with single mothers. 1 Marriage protects children to the extent that it helps increase the likelihood that children will be raised by their mother and father.

[…]
1 See Sara McLanahan & Gary Sandefur, Growing Up With a Single Parent: What Hurts, What Helps (Harvard U. Press 1994) (“In general, compared with children living with both their parents, young people from disrupted families are more likely to drop out of high school, and young women from one-parent families are more likely to become teen mothers, irrespective of the conditions under which they began to live with single mothers and irrespective of whether their mothers remarry or experience subsequent disruptions.”). [Statement of Maggie Gallagher, Hearing on “Defending Marriage,” 4/15/11]

Equality Matters went on to use the words of Judith Stacey, Professor of Sociology and Professor of Gender and Sexuality at New York University to call out Gallagher and others on the right who inaccurately use studies on the heterosexual family dynamic to demonize same-sex parenting, and by proxy, marriage equality:

According to the child protection discourse that Professor Wardle, Maggie Gallagher, and others deploy, social science research demonstrates that legalizing same-sex marriage poses dangers to children and families… In particular, claims that research establishes the superiority of the married heterosexual-couple family and that children need a mother and a father conflate and confuse research findings on four distinct variables - the sexual orientation, gender, number, and the marital status of parents… Unfortunately, opponents of same-sex marriage, like Maggie Gallagher and Professor Wardle, and even some advocates, draw selectively, indiscriminately, and inappropriately from research findings about all four variables to address questions the studies were not designed to, and are not able, to illuminate.

[…]
Opponents of same-sex marriage draw on a third body of literature in which researchers have achieved an unusual degree of consensus. Most family researchers agree that, all other things being equal (which, of course, is almost never the case), two parents are better than one. Research indicates that children raised in single-parent families are at greater risk of various negative outcomes (e.g., dropping out of school, delinquency, unwed teen pregnancy, substance abuse, etc.) than children raised in comparable two-parent families. All of this research, however, as Maggie Gallagher acknowledged, has been conducted on heterosexual-parent families. Moreover, this research generally compares children in married-couple and single-parent families, thereby confounding the effects of the number and the legal status of parents. None of the research cited to demonstrate the importance of fathers (or mothers) examines the adjustment of children raised by same-sex couples. Moreover, this research does not indicate that it is the gender or the sexual orientation of the absent parent that is responsible for the different outcomes of children raised in single versus two-parent families. Rather, most researchers conclude that the number and economic resources of parents as well as the disruptive effects that parental desertion or divorce can inflict on children's lives account for these differential risks. N12 [University School of Quinnipiac Law Review, via Lexis, emphasis added, 2004]

Gallagher has done this sort of thing before. In in January of last year, she distorted a study on child abuse to make the case that children in married biological homes do better to protect children from abuse than children in same-sex households.

All the other family structures studied (which does not include same-sex parent families probably because these are such a small part of the population), but does include solo parents, other married parents (remarried primarily), single parents living with a partner, cohabiting parents, and no parents.

Please bear in mind that at that same April 15 Congressional hearing,  Gallagher said it was unfortunate that people misinterpret things she says as a condemnation of "gay people" and "their parenting skills."

If Gallagher wants people to not think that she is condemning "gay people" and "their parenting skills," then maybe she should stop being so deceptive in her testimony.

Posted by BlackTsunami at 3:15 PM 5 comments:

Boehner's DOMA lawyers have withdrawn from the case - Hot damn! This is huge! What caused them to drop the case? The news of the $500,000 cost? The "vetting process?" Or maybe us "mean, nasty, pushy homosexuals." One guess whom the religious right, especially NOM is going to blame.

American Experience to focus on the Stonewall Uprising - The event that gave birth to the modern lgbt equality movement. This should be required viewing for everyone especially our young lgbts. Know your history, boys and girls!

Equal Time for 'Traditional Values' - Nasty, sneaky business going on in Texas. If it's successful, watch it go nationwide. 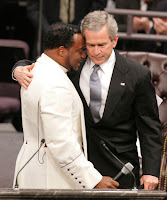 Reports are coming out that Eddie Long, pastor of the megachurch New Birth Missionary Baptist Church, is close to settling a case with four young men who filed a lawsuit last year claiming that he coerced them into sexual relationships.

This comes months after Long made a huge announcement in front of his congregation that he intends to fight charges:

The irony of this entire thing is, of course, the fact that Long is known for speaking out publicly against lgbt equality, especially marriage equality. According to blogger Rod2.0Beta:

In addition to being one of the nation's most prominent pastors, Long is also among the most vocal critics of gay rights and same-sex marriage in the Black church. In December 2004, one month after voters approved an amendment to the Georgia state Constitution that banned gay marriage, Long led a 25,000 person march against gay rights and marriage equality.

And according to the Southern Poverty Law Center, Long has also been very vocal in expressing his anti-gay opinions:


"Men can look attractive when they are dirty," writes Bishop Eddie Long in his 1997 book I Don't Want Delilah, I Need You! "We see sweating, dirty, hardworking men on television all the time and we say to one another, 'There's a macho guy.'"

Despite this affinity for sweaty, macho men, Long is one of the most virulently homophobic black leaders in the religiously based anti-gay movement. His book, subtitled What a Woman Needs to Know, What a Man Needs to Understand, appeared in the midst of a roaring growth period for Long's New Birth Missionary Baptist Church in Lithonia, Ga., near Atlanta. During the mid-'90s, it swelled to over 18,000 congregation members, men and women who worship in a multimillion-dollar complex that's the size of most major universities, spread out on 240 acres of land.

Much of what appears in I Don't Want Delilah was espoused in the videotaped "Back to the Future” sermon Long gave when his church was still small.

"It is the most unattractive thing I have ever seen, when I see women wearing uniforms that men would wear, and women fighting to get in the military!" Long shouted to his congregation then. "The woman gets perverted to turn towards woman … and everybody knows it's dangerous to enter an exit! And everybody knows, lady, if you go to the store and buy these devices [marital aids], it's Memorex! It ain't real!"

Even if there is a settlement, this will no doubt leave a huge stigma that will no doubt follow Long for the rest of his ministerial career.

Whatever the case may be, there is one good thing about this entire hot mess. I seriously DOUBT that Long will be saying stuff like the following for a loooooong time:

Posted by BlackTsunami at 4:31 AM No comments: