With the DNC convention in the back drop, I will continue to bring you news and thoughts: 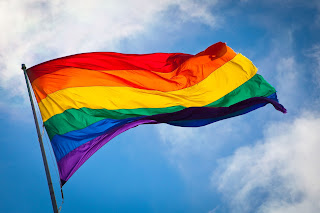 Gay DNC officials’ emails part of massive WikiLeaks release - Cool your jets. This article isn't about corruption or that ridiculous controversy designed to stir things up. The Gay DNC officials were talking about pushing against false information.

Miss Major Is A Trans Elder And Stonewall Icon.. And She’s Changing The World - The best interview you probably have yet to read.

Bryan Fischer: The NBA Is Punishing North Carolina For Refusing To 'Take The Mark Of The Beast'- The NBA takes a stand against discrimination in NC by moving the All-Star game away from Charlotte and Bryan Fischer responds in his own "shouldn't be copied" fashion.
Posted by BlackTsunami at 9:21 AM No comments:

Ramblings before the DNC convention. Just my thoughts.

So today is the start the Democratic National Convention and I hope it's a lot better than last week's monstrosity put on by the Republicans last week.

Since it's my blog, I have no problems with openly supporting Clinton and Kaine. My support is for a simple reason. With those two, lgbts don't stand to lose all that we fought for and won during the Obama Administration.

Every time around the presidential election, certain individuals wake up and start going on about saving the world, a corrupt system, real progressives, etc. etc. I don't mind saying that I'm not interested in saving the world before saving my own world. I'm not taking a risk of sacrificing lgbt progress and starting back from square one just to appease a superficial point.

Don't hand me crap about big banks or any of  the ultra liberal issue du jour. I learned all I need to know about the discipline and commitment of those folks in 2010 and 2012. It's so easy to march and shout slogans than it is to stay in the background and build structure, isn't it? Or get your friends to vote when the stacks are just as high but media attention is nil.

And I'm not even going to talk about that Wikileaks email crap which revealed NOTHING but a frustration over a candidate who stubbornly continued to push even though he was losing. There was nothing proven, except for the gullibility of certain people and their need to find any excuse to push issues which need to stay dead.

I know I'm probably rambling but I can. Here's hoping that this week shows the difference between calm, rationale leadership and hysterical ramblings. And here's hoping that certain shortsighted people don't screw it up.

Posted by BlackTsunami at 4:52 AM 4 comments: