How the Family Research Council brand transgender children as dangerous

One of the most powerful weapons in the arsenal of the anti-lgbtq right is language. It's relatively easy to refute their lies when compared to demonstrating how religious right groups and personalities exploit semantics in their attempts to control the narrative of debates about the lgbtq community.

The following from the anti-lgbtq hate group Family Research Council advertising an anti-transgender event is a perfect example. Watch how the organization brands transgender children as dangerous outsiders and their parents as nonexistent without even directly saying those words: 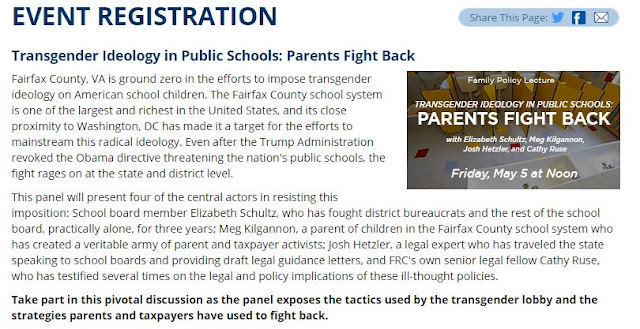 There are so many dog whistles in this announcement, one wonders if the Family Research Council has a side business as a kennel.

The fact that the Family Research Council has invited no medical professionals to this meeting goes without saying. That fact is merely rancid icing on top of this stale cake of transphobia designed to scare people  rather than educate them about transgender children.

Demonizing children is a nasty game, but the Family Research Council seems to have no problem playng it.


Trump’s Record on LGBT Rights: Death by 1000 Cuts in the First 100 Days - From Lambda Legal comes an astute assertion about Trump's first 100 days. While he has claimed about being pro-lgbtq, people in his administration have quietly been either making or prodding him to make very anti-lgbtq appointment picks and policies.

100 Days Of Trump: Delivering For The Extreme Religious Right - More info on this and other monstrosities of Trump's 100 days courtesy of People for the American Way.

Trump Army Secretary Pick: ‘Liberal Left’ Is Making Me Seem Like An LGBTQ ‘Hater’ - Uh no, you dipstick. Your anti-lgbtq and very transphobic statements and actions make you seem like a hater.

The Alabama Legislature Voted To Let Adoption Agencies Turn Away LGBT Parents - Because of Jesus?

Gay man sues New York museum for anti-HIV discrimination - The stigma of HIV is unfortunately as prevalent today as it was so many years ago.
Posted by BlackTsunami at 9:18 AM 2 comments: