Gays should never fear or avoid confronting the religious right

Secretary of State Hillary Clinton's monumental speech on gay rights yesterday has gotten a lot of reaction. However, none is as strange, at least to me, than that of Jim Downs, Assistant Professor of History and American Studies, Connecticut College.

He seems to think that Clinton's speech did a disservice to the American gay community. His piece in The Huffington Post, Hillary Clinton Is Not Helping the Gay Civil Rights Movement, leaves little to the imagination.

Basically, Downs is saying that Clinton's speech is emboldening the religious right and conservatives in America, such as Rick Perry in a recent anti-gay ad, to target gays as the means to motivate the Republican base. The gist of his piece can be seen here:

Clinton's clumsy language enables Perry to get even clumsier. It also allows him to open the door and let the religious right and the Tea Party loose on gay people. Clinton is worried about violence against gays abroad, but how does Perry's language provoke the religious right to launch a crusade against "gay" Americans at home? Perry exclaims, "Investing tax dollars to promote a lifestyle many Americas of faith find so deeply objectionable is wrong." In the stroke of a sentence, Perry calls on Tea Party advocates with his references to "tax dollars" and he summons the religious right with his reference to "faith." All of which ends up with both groups tying gay people to the whipping posts in a symbolic gesture to broaden the Republican base. Put another, gay people once again reenter the election season as a political football in order to rally the right against the left.

There is a certain degree of abject cowardice in Downs' piece which I find incredibly distasteful.

Regardless of Clinton's speech, the gay community will be a target to motivate Republican voters. As long as we have the temerity to live openly and honestly without fear - you know, like taxpaying citizens - there will always be some demagogue out there exploiting fears about us to the ill-formed, ignorant, and willfully stupid.

That's how it's always been as long as I can remember it.

But we shouldn't allow these things to keep us from speaking out against injustice. Gays should never cower from bullies. And we should never put ourselves in some type of psychological stasis in hopes that we are ignored.

You have to put these things in perspective. In the case of Rick Perry's recent attacks on our community, we shouldn't be all that surprised. Perry was once the leading candidate in the Republican primary. Now he is the leading drip, exposed as a bad politician and an even worse campaigner. His sad attack on us is nothing more than a drowning man clinging to a slowly sinking life raft.

Gays should never fear the desperation of those who choose to be our enemies. But we should fight them head on. And Downs' column reveals a sad fact, not only about the gay community, but many of those we anoint as our leaders. Unlike our brothers and sisters in foreign countries, we have the means to fight back, but we rarely do.

And by fighting back, I don't mean solely street protests or acts of useless spontaneity fueled by rage. I mean a steady and consistent stream of calling out religious right lies.

We either sidestep confronting the religious right  as if we want avoid them. Or worse yet, we fight the battle on their grounds. We yield too much to them. We allow the Family Research Council and the National Organization for Marriage to claim ownership of words like "morality" and "family" without raising the proper level of holy hell regarding the lies, distortions, and underhanded tactics they employ to acquire this license.

We let organizations like the Southern Poverty Law Center do the hard work in calling out these groups and then will not support them loud enough with our voices, anger, and our media. Then we either scratch our heads or cry foul when these groups gain approval in the mainstream media.

Our problem is not that we are exploited to fuel a base of ignorance. Our problem is that we allow it to happen without a proper response, even though we know it's going to happen time and time again.

So Downs is way off base in his piece and whether he realizes it or not, he is causing more harm than Clinton's speech.

She told us that we are human beings. He is telling us that we should be cowards.

Posted by BlackTsunami at 3:08 PM 5 comments:

The two items below are the examples of silly desperation. Neither Rick Perry nor Rick Santorum will ever get to the White House. In fact, their behavior on the campaign trail makes one wonder just how did they attain their original elected offices in the first place. They are both like a bad dancer who has tripped his way through a recital and now thinks of himself as a Baryshnikov.

The polite word to describe both Santorum and Perry is demagogue.

Santorum: Gays ‘Destabilize The Family’ When They Have Children ‘Through Technology’:

For the lgbtq community and our allies - NEVER get angry at the desperation of fools. Use their ignorance to further your cause. In other words, don't get angry. Get educated.

US Pushes Hard on LGBT Rights Around the World - A very good break down on what it all means. As Box Turtle Bulletin says, fasten your seat belts.

Religious Right Explodes over LGBT Rights Initiative - One would think that truly Christian people would stand AGAINST persecution and not for it. Of course in all fairness, these are not Christian people. And true Christians need to open their mouths and put these phonies in check.

Press Coverage of Obama’s LGBT Human Rights Policy Was Muted - It's muted now but the historical perspective of this moment will overcome that.

Posted by BlackTsunami at 9:13 AM 2 comments: 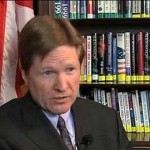 Naturally the Family Research Council had to include its voice in the chorus of conservatives angry at the Obama Administration for its new policy of advocating the fair treatment of gays in its foreign policy:

"It is startling that President Obama is prepared to throw the full weight and reputation of the United States behind the promotion overseas of the radical ideology of the sexual revolution. If he did the same on other issues, his own liberal allies would undoubtedly accuse him of cultural imperialism. Threats to withhold foreign aid from poor countries unless they conform their laws to the views of Western radicals are unconscionable.

"The United Nations, like the United States, remains sharply divided on the issue of whether special rights should be granted on the basis of sexual conduct, sexual orientation or gender identity. No treaty or widely accepted international agreement has established homosexual conduct as a human right, yet the Obama administration's actions seem guided by this fiction.

"President Obama should increase efforts to defend human rights that are widely recognized, such as religious liberty, rather than appeasing his domestic allies by imposing an alien ideology on other countries."

The huge irony is that FRC included a statement from Peter Sprigg, a man who has gone on record advocating that gays be exported out of the United States.

But more to the point, FRC seems to be saying that the Obama Administration shouldn't interfere with how a foreign country conducts its business.

How very ironic is it that earlier this year, FRC spoke out against a foreign country for doing just that:

According to the respected anti-persecution ministry Christian Solidarity Worldwide (CSW), an Iranian Christian pastor has been sentenced to death in Iran for, to put it simply, being a Christian.

CSW says that “the death sentence handed down in 2010 for the crime of apostasy, to evangelical house pastor Pastor Yousef Nadarkhani, has reportedly been upheld by the third chamber of the Supreme Court in the Shia holy city of Qom. Pastor Yousef Nadarkhani of the Church of Iran denomination was arrested in his home city of Rasht on 13 October 2009 while attempting to register his church. His arrest is believed to have been due to his questioning of the Muslim monopoly on the religious instruction of children in Iran.”

According to the Voice of Martyrs, “With (Pastor Nadarkhani’s) sentence now upheld and confirmed, it is possible that the authorities will ask him to recant his faith and execute him without advance notice if he refuses — a typical pattern of action taken by authorities in such cases.”

This death sentence has been issued despite Iran being a signatory of the International Covenant on Civil and Political Rights, whose Article 18 states:


“Everyone shall have the right to freedom of thought, conscience and religion. This right shall include freedom to have or to adopt a religion or belief of his choice, and freedom, either individually or in community with others and in public or private, to manifest his religion or belief in worship, observance, practice and teaching.”

Sadly, persecution of Christians in Iran is extensive

Violence against any group, be it gays or Christians, is wrong. There is no difference. Both need to be condemned equally.

And truly Christians groups know this.

Posted by BlackTsunami at 5:08 AM 4 comments: