A prominent social conservative leader compared homosexuality to drug use on Wednesday while urging parents not to “condone and enable” a child being gay.

Tony Perkins, president of the anti-gay Family Research Council, made the remarks while speaking at the National Press Club luncheon after being asked if he would disown one of his children if they came out as gay.

Perkins, the father of five children, replied that he wouldn’t “disown my children for anything,” but advised parents they should express disapproval if their children make such an announcement.

Perkins claims that he is not advising parents to disown their gay children, but he certainly is implying it.

What exactly does he think would happen should parents follow his advice when their children come out to them? Just what is his definition of "expressing disapproval" which does not involve disowning a child or acting in a manner which implies great unhappiness which can be construed to a child as a parent disowning them?

We will never know because Perkins did not go into more detail. And we shouldn't be surprised about that. Perkins is a fraud offering artificial solutions to complex problems which do nothing but exacerbate the problems.

Dan Savage had the following to say about Perkins in a tweet:

While I wouldn't make the statement so succinctly as Savage, I will say this:

Perkins has no degree in psychology, psychiatry, or pediatrics. Those who do - and therefore KNOW what they are talking about - say the following:

1. Parents who are intolerant of their lesbian, gay, or bisexual (LGB) teens may increase the risk that their kids will suffer health problems in young adulthood, such as an increased risk of suicide, depression, drug abuse, and unsafe sex, according to a new report.

Researchers interviewed 53 families with gay teens to identify certain parental behaviors as "accepting" or "rejecting," then surveyed 224 young-adult white and Latino gays and lesbians (ages 21 to 25) to see which of these behaviors they'd experienced during adolescence.

more than two-thirds said they had tried to kill themselves (vs. about 20% among those who reported the lowest rates of rejection)

many reported high rates of depression, illegal drug use, and substance abuse

46% said they'd had unprotected sex with a casual partner in the past 6 months (nearly twice the rate of those in the least-rejected group) - "Family Rejection as a Predictor of Negative Health Outcomes in White and Latino Lesbian, Gay, and Bisexual Young Adults," Pediatrics, Jan. 2009.

2. I have heard too many LGBT youths tell horrifying stories of violent abuse and rejection from their parents. The teenage boy from upstate New York, who, when his father learned he was gay, he beat him to a pulp, then threw him out of the house and told him that if he tried to come back, he would kill his son and bury him in the backyard. Or the boy from Florida whose father put a gun to his head and said "You are no longer my son. Leave the house now." The 17-year-old transgender child whose mother attacked him when she learned of his male identity, ripping out a piece of his scalp, and screaming homophobic abuse as her child fled. Or the 15-year-old boy who came out to his family at a picnic in rural Delaware. His father, a Christian minister, jumped on him and tried to strangle him. That evening he gathered his belongings into a few garbage bags and banished his son from his home. Or the family that drove their daughter out into the backwoods of New Jersey and tossed her from the car for being a lesbian. This is clearly not something to joke about

Research now documents the terrible scope of this crisis. Approximately 50% of LGBT youth whose sexual orientations and gender identities become known to their families experience some degree of family rejection. A recent report published by the Center for American Progress estimates that there are over 100,000 homeless LGBT youth on the streets of our nation, and that LGBT youth make up to 40% of our nation's homeless youth population. - Carl Siciliano, Family Rejection of LGBT Youth Is No Joke

Of course Perkins will claim that he was telling parents to reject the "lifestyle" and not the child, but don't fall for the false semantics.

If you pardon my candor, when it comes to gay children and their families, Tony Perkins doesn't know his ass from his elbow.

Posted by BlackTsunami at 3:10 PM 3 comments: Links to this post

Tony Perkins Kicks Off Values Voters Summit By Comparing Homosexuality To Drug Abuse - Right after comparing homosexuality to drug abuse, Family Research Council head Tony Perkins reportedly said “It’s time to dial down your demonization of those who differ with you.” Oh brother!

Hundreds rally for gay marriage in Portland, Maine - Good for them because the article also says that NOM is spending $500,000 on the fight. Ugh.

What Marylanders should know about equality's cynical opposition - And in Maryland, Marylanders for Marriage Equality issued an incredible memo to the media. Let's hope they pick up on it.

Posted by BlackTsunami at 8:53 AM No comments: Links to this post 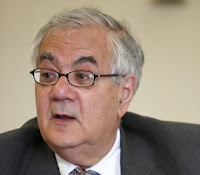 Many mainstream lgbt organizations distanced themselves from his words.

Yesterday, in a piece published by the Huffington Post, Frank made it clear that he was not apologizing or backing down:

. . . my use of "Uncle Tom" was based not simply on the awful fact that they have chosen to be actively on the wrong side of an election that will have an enormous impact on our right to equality, both in fact and in the public perception of the popularity of that cause. If the Log Cabin Republicans -- or their even more outlandish cousins, the oddly-named GOProud -- were honestly to acknowledge that they let their own economic interests, or their opposition to strong environmental policies, or their belief that we need to be spending far more on the military or some other reason ahead of any commitment to LGBT equality, and on that ground have decided to prefer the anti-LGBT candidate to the supportive one, I would disagree with the values expressed, but would have no complaint about their logic.

The damaging aspect of the Log Cabin argument, to repeat the most important point, is that they may mislead people who do not share their view that tax cuts for the wealthy are more important than LGBT rights into thinking that they are somehow helping the latter by supporting Mitt Romney and his Rick Santorum platform.

It is a good thing for Republicans to try to influence other Republicans to be supportive of LGBT rights. The problem is when they pretend to be successful when they haven't been, and urge people to join them in rewarding the Republicans when they have, in fact, continued their anti-LGBT stance. I have been hearing the Log Cabin Republicans proclaim for years that they were improving the view of that party towards our legal equality. In fact, over the past 20 years, things have gotten worse, not better.

. . . Some have complained that in comparing the Log Cabin Republicans to Uncle Tom, I was ignoring the fact that they are nice. I accept the fact that many of them are nice -- so was Uncle Tom -- but in both cases, they've been nice to the wrong people.