Does Miles McPherson want to hide his gay = pedophilia belief from the Proposition 8 trial? 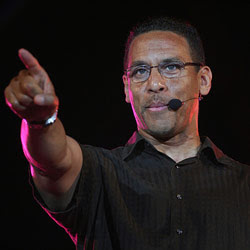 I read an interesting piece on the Truth Wins Out webpage regarding two San Diego pastors not wanting to testify in the ongoing trial regarding Proposition 8, the ballot measure in California that prevented gays from marrying in the state.

The two pastors are Jim Garlow and Miles McPherson:

Curiously, both San Diego pastors were subpoenaed to testify at the Perry v Schwarzenegger federal trial, also known as the Olson-Boies trial, on the constitutionality of California’s Proposition 8, which was backed, endorsed and aggressively promoted by both pastors and which eliminated the existing right of gay and lesbian Californians to marry.

Both Pastor Jim Garlow and Pastor Miles McPherson, through their legal representation — Brian R Chavez-Ochoa of Chavez-Ochoa Law Offices, Inc. — have filed motions to quash their subpoenas to avoid testifying in public. What follows is is the gist of their arguments against publicly continuing their anti-LGBT and anti-marriage-equality ministries before Judge Vaughn Walker in a court of law.

I won't dwell in Garlow because I find McPherson's reasonings rather interesting. The following are his justifications for not testifying:


I, Miles McPherson, hereby declare and make this declaration out of my own personal knowledge and if called upon to testify to the contents herein I could and would do so competently

1. We preached at our church – The Rock Church – marriage and issues surrounding Proposition 8.

2. We organized supporters of Proposition 8 based upon our belief in traditional marriage; which happens to contradict same sex marriage and other forms of marriage, other than one man and one woman.

3. My church and I have nothing but love for homosexuals and lesbians, but we reserve the right to disagree with those we love.

4. I am concerned about the precedent that this subpoena sets for all those who wish to speak out about their beliefs.

5. Because of my preaching on Proposition 8, 1 have received hundreds of e-mails threatening me and expressing hate towards me and my church.

I hereby declare under penalty of perjury under the laws of the United States and the State of California that the foregoing is true and correct.


Pastor Miles McPherson’s motion to quash his subpoena can be found in the PDF file at this link.

That third point - 3. My church and I have nothing but love for homosexuals and lesbians, but we reserve the right to disagree with those we love - stands out mostly because I have an issue with it.

I wrote about it last year during the Carrie Prejean scandal. At the time, Prejean attended McPherson's church, the Rock Church of San Diego and I was pointing out the fact that McPherson was relying on the discredited work of Paul Cameron to claim that homosexuality and pedophilia are connected in a piece he wrote entitled Sodom and Gomorrah, a City Inflamed.

The piece has been scrubbed from on the Rock Church of San Diego's webpage. However, the following is a part of my post regarding it -  the part which clearly shows McPherson using Cameron data to make the inaccurate connection between homosexuality and pedophilia:


I looked at the church’s webpage and found there to be a lot of inaccurate information, particularly regarding gays and HIV:

But it’s the next section that caught my eye like a blinking light:

There are also moral repercussions stemming from homosexual behavior as evidenced by the fact that one third of all sexual crimes against children are committed by homosexuals even though they are representative of only one percent of the population. Pedophilia has even been called central to the gay lifestyle. The agenda of the North American Man Boy Love Association (NAMBLA) is to lower the age of consent so that sex with children will be legal.


The idea that homosexuality and pedophilia are linked is a lie that has been refuted continuously. The American Psychological Association, the National Association of Social Workers, the American Academy of Child Psychiatrists and the Child Welfare League of America all say that the homosexuality and pedophilia are not linked.

So where did that notion come from? The discredited researcher Paul Cameron:

In a 1985 article published in Psychological Reports, Cameron purported to review published data to answer the question, "Do those who commit homosexual acts disproportionately incorporate children into their sexual practices?" (p. 1227). He concluded that "at least one-third of the sexual attacks upon youth are homosexual" (p. 1228) and that "those who are bi- to homosexual are proportionately much more apt to molest youth" than are heterosexuals (p. 1231).


Does McPherson not want to testify to avoid being asked about his usage of junk science against the lgbt community? It is a good question in light of the fact that he is the second Proposition 8 proponent who is seeking not to be ordered to testify citing the same reasons (being threatened) while trying to hide past statements which show an ugly anti-gay bias.

Hak-Shing William Tam was one of five defendants who petitioned the court to be allowed to defend Proposition 8 . On January 6, he requested that he be allowed to withdraw from the case citing the possibilities of threats on himself and the lives of family members.

However, according to the Associated Press:

In the months leading up the trial, lawyers for two unmarried same-sex couples on whose behalf the case was brought complained that Proposition 8's sponsors were withholding evidence to which the plaintiffs were entitled by citing a letter they had uncovered written by Tam to members of his church during the campaign.


In the letter, Tam outlined what he described as the disastrous consequences for allowing gays to marry in California.

"One by one, other states would fall into Satan's hands," he wrote. "Every child, when growing up, would fantasize marrying someone of the same sex. More children would become homosexuals."

The contents could come up in the trial because one of the issues is whether the measure's backers were motivated by anti-gay bias.


So that's two Proposition 8 proponents who either claimed that same-sex marriage would make children gay or used discredited studies to claim that gays molest children at a high rate.

It sounds like McPherson (and Tam) want to hide what's increasingly obvious. Proposition 8 was passed via ugly anti-gay bias.

But lgbts and our allies already knew this.

UPDATE - Tam testified as a hostile witness. He stood by his beliefs regarding homosexuality and pedophilia but couldn't say where he derived them from.

Posted by BlackTsunami at 8:53 AM 4 comments: