#ObamaGate - a pathetic hashtag for losers who hate Obama & want to distract from Trump's complicity in the deaths of 80,000 Americans.

Last weekend, including Mother's Day, Twitter faced a huge barrage of posts coming from folks who despise former president Barack Obama and would like nothing more than to see him arrested, led away in handcuffs, and forever disgraced.
Why?
I will let The Guardian begin the story:

On Friday, former US president Barack Obama expressed disquiet at the justice department dropping charges against Donald Trump’s former national security adviser Michael Flynn, who was fired in early 2017 for lying about conversations with the Russian ambassador. On a recording obtained by Yahoo News, Obama warned that the “rule of law is at risk”. He also described Trump’s handling of the coronavirus pandemic as “an absolute chaotic disaster”.

This led to a huge campaign from bots, trolls, and supporters of Trump to flood Twitter with messages, memes, and factoids while using the hashtag #ObamaGate. They claimed that Obama illegally spied on Trump in order to undermine his presidency. The claim is an old conspiracy theory which has been repeatedly refuted. In any other era in this country, that would have been the end of the story. But this particular era is the one of amateur "researchers" and "journalists," i.e. people whose expertise consist solely of videotaping themselves spouting off-the-wall theories and posting said videos on Youtube. There is no such thing as solid refutation. Anything which conflicts with the conspiracy de jour is nothing more than another depth in the rabbit hole of wildly hatched and unproven theories.
And when it comes to Obama, negative conspiracy theories are numerous from people who swear up and down and probably even on their Bibles that their hatred of him has nothing to do with racism. They simply think of Obama as a Kenyan Muslim socialist communist anti-Christ Manchurian candidate who worked with the Deep State to fake his birth certificate and relied on his racial heritage to cheat his way into the White House while plotting to destroy America by apologizing for it while creating FEMA camps, sowing racial division, putting his feet up on the Oval Office desk, bowing in front of foreign leaders in submission right before he eats his hamburger with Grey Poupon really fast before he spills it on his tan suit.
Did I miss anything?
So this campaign, amplified by Donald Trump (see tweet below), actually trended on Twitter for two days.

And while Trump's tweet was surprisingly sedate, others weren't. They ran the gambit from ugly to downright nasty: 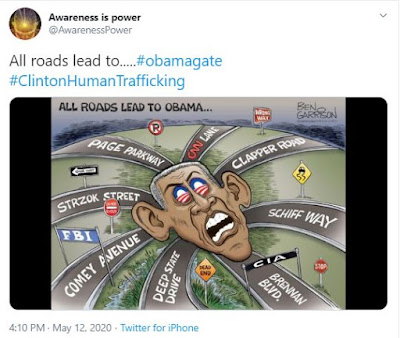 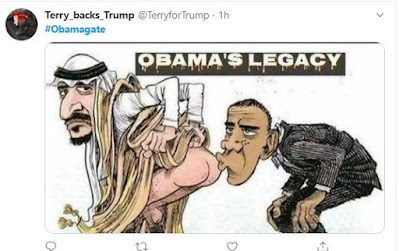 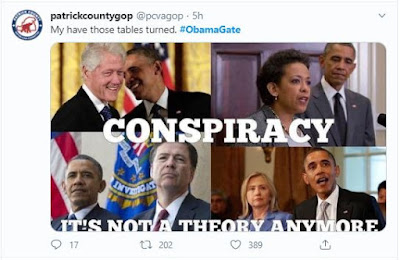 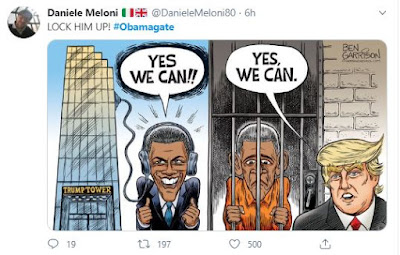 And some tweets just went way out there. This one below was a video with Obama's, Trump's and Barr's faces superimposed: 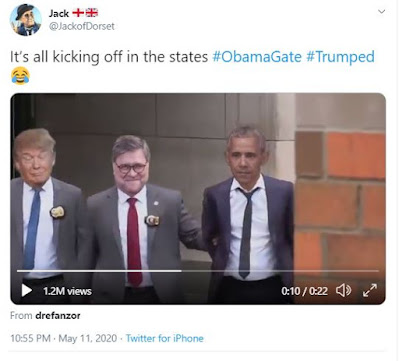 While this one below reiterated a debunked, but disgusting claim that Democrats were behind a ring of pedophiles masquerading as a pizza restaurant. 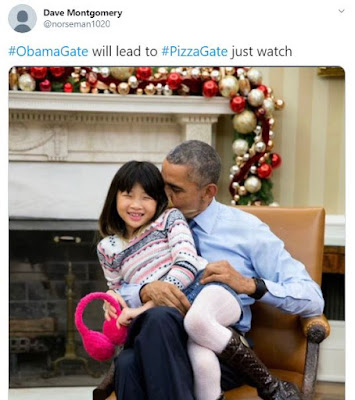 Little Richard was anti-gay when he died, but his queer cultural influence overshadows us all - Little Richard was a talented but a sad, conflicted man. Though he rejected a better part of himself before his death, one cannot erase the impact his queerness had on the world.
Idaho governor appeals to Supreme Court to stop trans inmate's surgery - Oh give me a break. Is preventing the surgery a pressing need?
Montgomery County could make LGBTQ history with Tuesday Board of Education vote - Oh? I'm definitely all for this.
Advocates were mobilizing LGBTQ people everywhere for the 2020 census. Then the coronavirus pandemic erupted. - Now we have to get that momentum back.
Posted by BlackTsunami at 8:55 AM No comments: