This video, courtesy of Equality Matters, should be required viewing for everyone supporting lgbt non-discrimination laws. I've seen those against these laws demonstrate the ability to repeat talking points and lies on cue. We need to pick up that ability when it comes to debunking the talking points and lies.:

Tony Perkins Uses Meriam Ibrahim To Promote Anti-Obama, Anti-Gay Agenda - How morally bankrupt is the Family Research Council? Even when the organization helps to save a woman from being executed in Sudanese country, it tells lies about the situation to bash Obama and the lgbt community.


In Utah’s same-sex marriage debate, should the children be off limits? - Looks like our opposition is getting highly tacky.

Americans Growing Anti-Gay, Want Even More Religion In Their Politics - To willful men, the injuries they procure must be their own schoolmasters. Careful what you wish for, folks.

FRC's 'Values Voter' summit will be another anti-gay hot mess 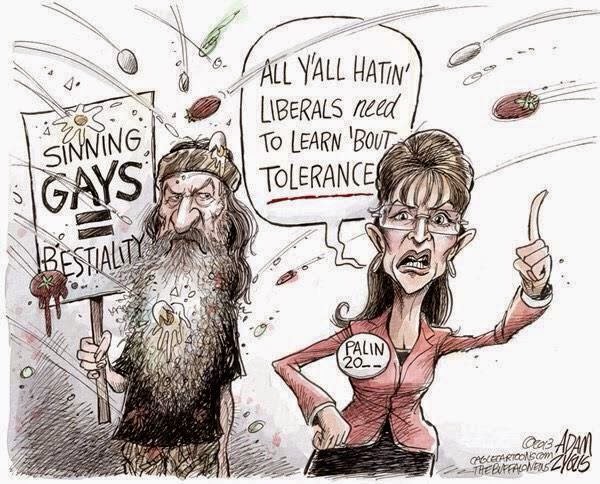 It's that time of year again when the Family Research Council unleashes one of its  "Values Voter" summits on America. It's going to be a cornucopia of homophobia, anti-Obama lies and basic nastiness under the guise of  "protecting morality."

Everybody who is anybody in the right-wing will be there from Michelle Bachmann to Sarah Palin (although I doubt Palin will be talking about that brawl her family got into recently). From Right Wing Watch comes a short who's who listing:

Tony Perkins is president of the Family Research Council, the chief sponsor of the Values Voter Summit. Now a widely recognized spokesman for social conservative causes, Perkins served two terms as a Republican legislator in the Louisiana House of Representatives before launching a failed bid for the U.S. Senate in 2002.

Perkins has: Contended that the anti-bullying “It Gets Better” project is “immoral,” “disgusting,” and promotes “perversion.”

Defined efforts by the Obama administration to advance LGBT rights abroad as a push for “radical sexualism” and “global homosexuality.”

Praised a Uganda bill that would have condemned gays and lesbians to death as an effort to “uphold moral conduct that protects others and in particular the most vulnerable.”

Warned that LGBT rights advocates will launch a holocaust against Christians, placing those that oppose same-sex marriage into “boxcars.”

Mat Staver is the dean of the Liberty University School of Law and the founder and chairman of its affiliate, Liberty Counsel, which is a sponsor of the Values Voter Summit.

At a previous Values Voter Summit, Staver claimed that progressives are using LGBT rights and secular government in order to “ultimately implode America” and that the “agenda of the homosexual movement” is to destroy freedom and Western civilization.

Through his position at Liberty Counsel, Staver has: Suggested that the president was using health care reform to create his own personal army of Brownshirts.

Claimed that President Obama “does not respect America” and wants to intentionally cripple the country so he can gain global power.

Called the legalization of same-sex marriage “the beginning of the end of Western Civilization,” warning it will lead to “forced homosexuality.”

Twin brothers Jason and David Benham were catapulted to national attention this year when an HGTV show that they were set to star in was cancelled following revelations about their anti-gay, anti-choice, anti-Muslim activism. Since the show’s cancellation, the brothers have become a cause célèbre for the Religious Right, which has lifted them up as an example of the supposed persecution of conservative Christians in America.

One or both of the brothers have: Asserted that the LGBT equality movement is part of a “spiritual fight" between God and the “kingdom run by Satan.”

Urged the city of Charlotte, NC to deny permits to an LGBT Pride event, calling it a “vile” and “destructive” activity that “should not be allowed in our city.”

Compared the fight against marriage equality to opposing Nazi Germany.

Called an Islamic community center a “den of iniquity” and referred to Muslims as “the enemy attacking" America.


For more about the rest of the "Values Voter" attendees, go here.
Posted by BlackTsunami at 5:03 AM No comments: