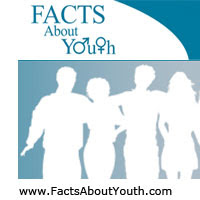 Last night, for a brief second, I reached "the other side of the mountain," so to speak. I reached a moment where I was, in the words of an old saying, a little north of where I wanted to be.

In short, I went ballistic.

Those who know me and my work can probably guess why. There is another religious right web page purporting to give the so-called true facts about the gay community. And these true facts are the same old lies. Even worse, this site is directed to children and adults working in the school system.


According to its web page, Facts About Youth:


is a resource created by health professionals to provide policymakers, parents and youth with the most current medical and psychological facts about sexual development.

Amid debate in the medical and mental health fields concerning the causes and proper approaches to youth with non-heterosexual attractions, Facts is a non-political, non-religious channel presenting the most current facts on the subject. Facts is committed to advancing a school environment in which all students will experience the opportunity to achieve optimal health and safety, even in the midst of differing worldviews. Facts is intended to be a resource to promote the factual and respectful discussion of these potentially divisive issues. This is a web site for and about youth and their needs.

You want to now who these "health professionals" are? Again according to the web site, Facts About Youth:

is a project of the American College of Pediatricians, in coalition with other organizations who share a concern for the well-being of all youth. Unfortunately, some medical organizations, influenced by political correctness, have misrepresented science in order to affirm unhealthy lifestyles as normal behavior. Facts presents science-based information to clarify the medical and psychological discussions concerning this important aspect of a child’s life. Facts will not engage in the polemics of opinion, but will objectively offer the facts for all to see and assimilate. Facts is interested only in the welfare and protection of children and their families.

The College has received support and assistance for this project from the National Association for Research & Therapy of Homosexuality (NARTH), the Pediatric Psychosocial Development Committee, other like-minded organizations, and parents and individuals with a personal perspective on issues related to gender identification and how they impact children.

I've talked about the lies of the American College of Pediatricians before. Also, those of us familiar with the  inner workings of the industry of phony religious right studies know some of those names of these folks behind Facts About Youth.  Joseph Nicolosi is a man who has made it his life's work to peddle the inaccurate notion that homosexuality is a changeable condition. According to the site Truth Wins Out:

Nicolosi is also known for his strange theories, such as encouraging his male clients to drink Gatorade and call friends “dude” to become more masculine. He also believes that “Non-homosexual men who experience defeat and failure may also experience homosexual fantasies or dreams.”

And George Rekers is a former professor at the University of South Carolina and a founder of the Family Research Council who has testified against the lgbt community in adoption cases.

So to say that this web site is nonpolitical is the first lie. And it's certainly not the last.

Read more »
Posted by BlackTsunami at 9:11 PM No comments: Links to this post

While our friend Peter LaBarbera kicks up a futile tantrum about his "Americans for Truth" web site being declared a hate site by the Southern Poverty Law Center, let's not direct so much attention and laughter towards him that we forget about the other officially declared anti-gay hate groups, such as California's Traditional Values Coalition:

ENDA – aptly described as the “cross-dressing teacher’s bill” – will force every American public school to hire men who dress like women as teachers.

Currently, 38 states do not consider men dressed as women (cross-dressing heterosexual men, gay drag queens, or transsexuals) as protected minorities under anti-discrimination laws. All of this will change under ENDA when it becomes illegal to re-assign transgender teachers out of the classroom.

In the next few weeks, if President Obama signs ENDA into law, your children will be trapped in classrooms taught by men who dress as women.

ENDA also forces every state and local government (including public schools), and every business with more than 15 employees to treat men who dress as women as federally protected minorities.

When I read this, I was thinking (strictly tongue in cheek of course) that this was a step up because it was the first time that I didn't read the Traditional Values Coalition refer to transgendered women as "she-males."

But lest we forget, a step up in manure still leaves mess on your shoe.

Of course the Traditional Values Coalition is lying about ENDA, but to put this lie in perspective, take a look at the following flyer from a racist group, the National Alliance: 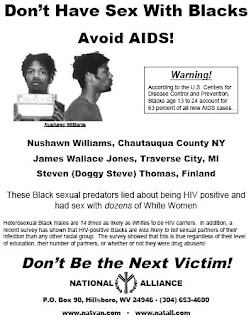 So a racist group says that interracial romances are a bad idea because black men would  "infect white women with HIV."

When one compares this claim to that of the Traditional Values Coalition (ENDA will lead to children being "trapped in classrooms with drag queens"), one finds that there is no difference between them. They are both lies geared to exploit ignorance via alarming calls that a "dangerous group of outsiders" are seeking to corrupt wholesome entities, be they white women or children.

No difference, that is, except for the fact that if the Traditional Values Coalition is pressed on this lie, the organization can fall back on the "we are a Christian group attempting to preserve morality" card.

But the similarity is definitely worth remembering because I'm willing to bet that before this entire thing with ENDA is settled, the Traditional Values Coalition and other like-minded groups will be claiming that gays and lesbians are trying to piggyback on the 1950s/60s civil rights struggle of the black community.

But in the long run, it doesn't matter who had to ride in the "back of the bus" or who gets chased down a street.

As long as there are entities willing to exploit fear and stereotypes, we all suffer.

The Fox Nation and its gay-baiting ways - If we thought that Chai Feldblum receiving the appointment to the Equal Employment Opportunity Commission put an end to the attacks on her, guess again.

Judge: Transgender inmates have right to therapy  - I stand with the transgendered community here.

Child-Raping Priests and Their Protectors = The New Jews - Now I've seen everything and it officially makes me sick.

Gay People: Serving As Your Handy Scapegoat For Fear And Shame For Generations - Bruce Garrett breaks it down perfectly.

Posted by BlackTsunami at 8:40 AM No comments: Links to this post

Why does William Donohue contradict the Pope while defending the Catholic Church? In his eagerness to blame the gay community for the problem of child molestation in the Catholic Church, William Donohue of the Catholic League seems to have forgotten one very important thing about his charges.

The Pope already addressed the situation and said in fact that the problem with abuse has to do with pedophilia and not homosexuality.

It took place two years ago when Pope Benedict XVI was addressing the scandal of the abuse of children in American Catholic churches.

Now let's dismiss (for the extreme briefest of seconds) the sad fact that two years later, we are still talking about the abuse of children in the Catholic Church and take a look at what Pope Benedict XVI said (via The New York Times):

“It is a great suffering for the church in the United States and for the church in general and for me personally that this could happen,” he said. “As I read the histories of those victims, it is difficult for me to understand how it was possible that priests betrayed in this way. Their mission was to give healing, to give the love of God to these children. We are deeply ashamed and we will do what is possible that this cannot happen in the future.”


Apparently drawing a distinction between priests with homosexual tendencies and those inclined to molest children, the pontiff said: “I would not speak at this moment about homosexuality, but pedophilia, which is another thing. And we would absolutely exclude pedophiles from the sacred ministry.”

So why is Donohue trying to push a belief (the priests who molested the children were gay because the crimes were of a "same sex nature," ergo men who molest boys should automatically be assumed to be gay), which not only has been contradicted by the Pope but also (lest we forget) legitimate bodies such as the American Psychological Association, the National Association of Social Workers, the American Academy of Child Psychiatrists and the Child Welfare League of America?

If I ever find out the answer to that question, I'm going to next ponder why isn't anyone from the Vatican communicating to Donohue that maybe his input isn't exactly helping and that he should talk a flying leap.

Expert: Donohue's claim that most abusive priests are gay is "unwarranted"