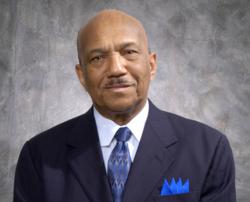 So now Trump has started a new controversy with his racist comments against the city of Baltimore in an attempt to smear Congressman Elijah Cummings.  He has been just about universally condemned, except for by a few - Republicans who either support or need him to fulfill their goals. And other folks who see it as an opportunity for spotlight. This latter category includes so-called black leaders who can always be counted on to publicly defend defend the racist excesses or the extreme agenda of the GOP. Recently, Trump met with a few of them in an attempt to blunt the firestorm he caused. What's interesting is that the LGBTQ community should recognize a few of these folks, and not in a good way.

CNN’s Don Lemon confronted Reverend Bill Owens on meeting with President Donald Trump following his widely condemned attack on Baltimore and its Congressman, Elijah Cummings. Owens, the president of the coalition of African-American pastors, on Monday attended a meeting between Trump and a group of inner-city pastors

Lemon kicked off the interview by asking if any of the faith leaders raised concerns about the president’s attacks on “leaders of color.”

“I think something was said in passing,” Owens replied, though he tried to avoid addressing Trump’s remarks.

“I don’t think so. I don’t think that at all because I have been to the White House four times in five months,” Owens said. “There was nothing about insulating from anything. He wanted to hear from us, what our concerns were and what he could do to help us.”

Lemon noted that Owens has “said some controversial things before” including in 2012 when he compared President Barack Obama’s support for same sex marriage to condoning child molestation (comments Owens walked back).


Unfortunately, the Mediaite article omitted a few things. Owens is the head of a group called the Coalition of African-American Pastors. It sounds legitimate, but it actually serves as a way for Owens to provide a black voice to conservatives for a price, particularly when it comes to anti-LGBTQ issues:

The National Organization for Marriage used CAAP in a failed attempt to sabotage President Obama's African-American support during the 2012 election.

Owens has admitted to being paid by organizations like NOM ($20,000), the Family Research Council, and the American Family Association to be a shill.

And to make matters worse, there have been serious questions - which Owens has never answered - as to whether or not he actually marched or participated at all in the Civil Rights Movement.


Read more »
Posted by BlackTsunami at 5:06 PM No comments:


Liberty Counsel’s Mat Staver continues smear of LGBTQ people by lying that the Equality Act will legalize pedophilia - The lie never dies when there is someone there to push it.

Russia rips children from their dads under ‘gay propaganda’ law - This is awful and you know some folks want mess like this to happen here in America.

Secretary DeVos Is Failing to Protect the Civil Rights of LGBTQ Students - Unfortunately, no one should be surprised.

Author of bestselling Christian book apologizes to LGBTQ community - Good for him.

Posted by BlackTsunami at 9:20 AM No comments: