How Trump could destroy Obama's LGBT Progress (IF we let him)


My online friend, Matt Baume details how Trump could harm the progress the lgbt community has made under Obama. I added the caveat "if we let them" to remind everyone that nothing is ever hopeless and to gear up. We fought hard for what we have and we are not about to let any of it go. Not without a big nasty, knockdown, dragged out fight.
Posted by BlackTsunami at 2:50 PM 1 comment:

Just an observation about Franklin Graham, the repeal of Obamacare (which could leave 18 million people uninsured,) and the transgender community. Feel free to retweet it:

What a pity that no one can blame the transgender community for it. Then @Franklin_Graham would be sure to comment on this travesty. https://t.co/wtMV38xVfo
— Holy Bullies (@holybullies) January 17, 2017

Religious freedom: It’s a core American principle, and it doesn’t mean what right-wingers want it to mean - I am sure we will be debating this heavily this year. Folks need to get prepared to give an aggressive AND intelligent push back.

Women’s March to include LGBT presence - You'd better believe it!

Conservatives try to convince the Supreme Court to embrace transphobia - This came from four days ago, but it's a wonderful breakdown of the anti-transgender argument conservatives are pushing to SCOTUS in Gloucester County School Board v. G.G

Mat Staver: Right Wing Watch ‘Is Just A Bunch Of Fake News’ - Like anyone actually has to make up any news about hate group leader Mat Staver.
Posted by BlackTsunami at 9:18 AM No comments:

As President Obama leaves office and the Orange Encrusted Overlord prepares to attempt to take his place, the thing which aggravates me probably the most is what people are missing about Obama's time in office.

Obama has said that at times he failed to translate his personal popularity to support for his policies and no doubt, this probably be what a portion of his legacy may be. And it's a fallacy.

No president, as far as I know, had networks, think tanks, and "news sources" constantly undermining him 24 hours a day as Obama did. No president had opposition who constantly pushed lies about his background, his motivations, and the successes of his policies as Obama did.

Case in point is this nonsense below. Even though he is leaving office, the anti-lgbt hate group the American Family Association, through its phony news service One News Now, can't resist taking at least one more dig at Obama via a false poll: 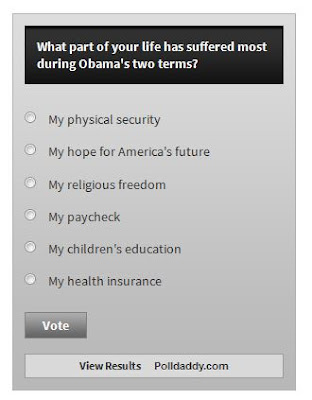 America is substantially better in all of these areas as Obama leaves office, but One News Now will spin it in the opposite direction. And of course its "Christian" readers will respond like sheep. As of 7:51 a.m. PST, the results are: 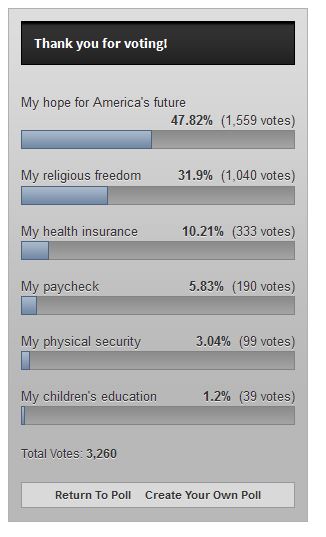 Some have claimed that Obama always had a problem with white evangelicals. When any group, be they white evangelicals or anyone else, are constantly relying on a news sources which gives consistently them negative headlines and articles about Obama, what does one expect him to have BUT problems.

Ironically, One News Now is also running articles implying that we need to "come together" under President Trump.

Keep dreaming. It ain't gonna happen.
Posted by BlackTsunami at 4:58 AM 2 comments: