My lesbian sisters don't scare me. THIS prayer against them does scare me

It's been said that the religious right spends a considerable amount of time talking about gay sexual intercourse in effort to disgust people.

But as this audiotape and transcript demonstrates, when they get cooking in terms of attacking the lesbian community, the religious right gets equally strange about the sisters.

The person on this tape is Cindy Jacobs from a recent "Christian" rally in Sacramento talking about the "evils" of lesbian. Don't turn your volume up. In fact, I would suggest that you turn it down just a little.

I want to talk as a mother to the young women today. We know that it’s not just the men who have a problem with pornography and I want to say it like this: girl-on-girl kissing, lesbianism is a plague on our society today.

And I want to read the word of God and I want us to pray. Roman 1: 25 says those who exchanged the truth of God for a lie, and worshiped and served the creature rather than the Creator blessed forevermore, for this reason God game them up to vile passions where even their women exchanged the natural use for what is against nature.

I’m going to call on the women and I want to say that it’s time for us to repent.

This girl-on-girl kissing, Madonna kissing Britney Spears, and what happened to Britney after that and a lot of other things. I know we’re going out over worldwide television. I want to tell you, bisexuality, every kind of perverse thing, the Bible calls this sin. And I want the women of God to kneel down right now and we are going to put a stop to this in our generation and we are going to say “No More!”

And I want to say to you, this gender mainstreaming that says that you don’t know if you’re a boy or a girl until you have sex with both, boy or girl, has got to stop. If we agree right now that there is a holiness movement coming, we decree in the name of Jesus that men and women are going to be their natural use, in the name of Jesus.

One of you young women want to repent for that, lesbianism?

Geez, these people think more about sex than I do.

Hat tip to Truth Wins Out and Religious Right Watch.

Posted by BlackTsunami at 3:12 PM 2 comments: Links to this post

Glenn Beck's anti-gay army of God - This should surprise no one. Pay special attention to Miles McPherson because a certain intelligent blogger is cited as a source. Folks who call Beck a moderate voice on lgbt equality should read this list.

Montana Tea Party Leader Fired Over Anti-Gay Facebook Comments - The tea party does something right. There must be a blizzard outside.

WND's Joe Farah on debate with GOProud's Barron: I'm going to expose its 'radical goals and agenda' - I don't know. The war with GOProud, Farah and Coulter was cute at first. But does it strike you as planted now? I'm not saying for sure, but this thing seems to have reached the levels of satire and parody.

Gay Anti-Asian Prejudice Thrives On the Internet - Hinting on the thing that could wreck the lgbt movement for equality.

Religious Right Demands Inclusion in GOP Agenda - This promises to be good theatre.

Posted by BlackTsunami at 9:04 AM No comments: Links to this post

SC Pride was a monster hit (oh which I am still recovering from) drawing over 10,000 attendees, especially during our festival.

And we also garnered coverage from local television, the State newspapers, and The Advocate magazine.

So as I continue to get back into form, allow these pictures to suffice: 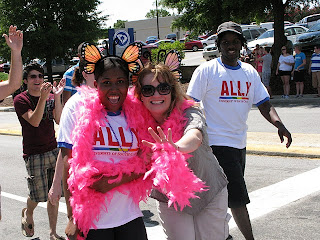 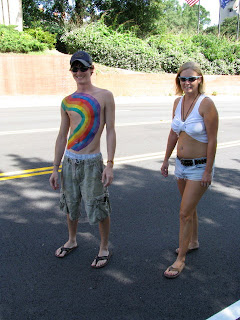 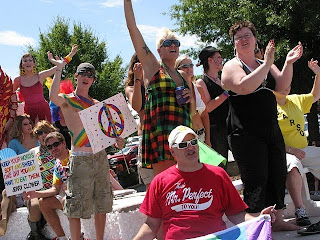 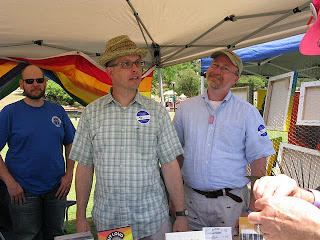 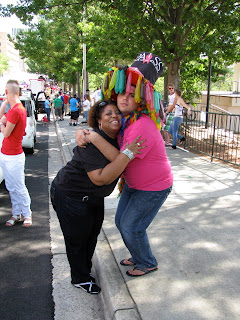 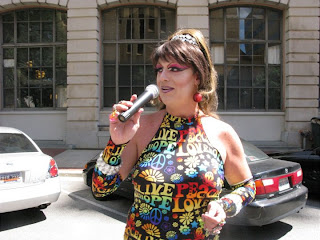 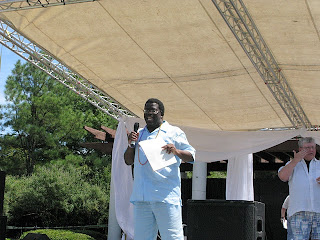 Yes that last picture is of your intrepid blogger speaking. I'm glad it was taken so far away. My hair died on me and my outfit makes me look like  . . . well no more linen for me.

Other pics can be seen here, here,  and here at this excellent spread with the State Newspaper