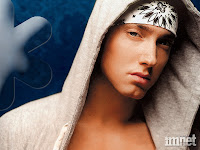 Now I generally don't like to cover entertainment issues because I feel that the lgbt community has too much celebrity on the brain. A lot of times, we are not in the business of training leaders because wait for the latest celebrity to come out of the closet and then anoint that person as our spokesperson.

However, I do believe in pointing out basic strange ironies and the situation regarding rapper Eminem's new album is a huge one. I am of the belief that if I don't point this irony out, no one will.

So is this the real Slim Shady?

Notoriously profane rap star Eminem has for years been criticized for lyrics that routinely use slurs of all flavors, not to mention violent and abusive rhetoric. Now the rapper has decided homophobic slurs are fair game once again, releasing a new single, "Rap God," which references "faggots" and "gay boys."

More than six minutes long and chockfull of lightning-fast braggadocio, "Rap God" -- off the upcoming album "The Marshall Mathers LP 2" -- includes Eminem boasting in the first verse about how he'd like to "break a motherf----r's table over the back of a couple faggots and crack it in half." Later on in the second verse, the rapper includes the following description in a long riff on different kinds of "boys":


I want to get angry at Eminem because lyrics like this have no place in popular music, but I can't because the irony of the entire situation has me scratching my head.

Now I'm certainly not calling Eminem gay because I don't know his sexual orientation, but I am saying that his embracing of homophobic lyrics is bizarre in light of the fact that this young man has probably shown his bare butt more than most gay men I know.

So far, Eminem has mooned folks at the 2004 Video Music Awards

on a television show in Germany in 2004

and several other places including red carpet events and music videos.

And I haven't even mentioned the Sacha Baron Cohen incident where, while Eminem did not show his rear, he was in an extremely close proximity to buttocks.

My thing is this - come on, Eminem. If you are going to rap negatively about gay people, first let's hear about the fact that many of us have probably seen your butt more than that of George Michael's.

But at least George Michael kept his pants on.
Posted by BlackTsunami at 3:18 PM 3 comments:

For those who care about lgbt equality in the United States and worldwide, the following two articles by John Becker and John Aravosis are the most important posts you will read in a long time:

How Eager Is Conservative Media To Demonize Transgender Youth? - Very eager. Even to the point of spreading false stories.

5 Flawed Arguments Officials Are Using To Defend Utah’s Same-Sex Marriage Ban - to the lgbt community, flawed anti-gay arguments are like guests we can't get rid of, meaning that we have seen these before.

MassResistance's Camenker: Gay Couples Enter Businesses And "Fondl[e] Each Other" To Test Owners' Tolerance - Just in case you need a primer, Camenker is lying through his teeth.

Fox's Starnes Can't Stop Defending Anti-Gay Hate Group - Calling Todd Starnes out on his lies is so enjoyable that it should be fattening.
Posted by BlackTsunami at 8:59 AM No comments: