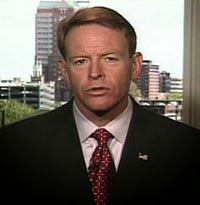 The Family Research Council's Tony Perkins will have folks to believe that he and his organization stands against lgbt equality because they are filled with so much love for us that they want to tell us "the truth." Take a listen to what Perkins' definition of "love" entails:

Caller: At the beginning of your show, I suppose it was a rhetorical question about what’s driving this administration. Well, simple explanation. If it’s not of God, it’s of the Devil; and you can certainly tell that the Obama administration is not of God. How can they expect any kind of peace with crazy stuff going on with any kind of certainty of working things out when you have a Muslim leader of a country over here per se trying to work things out between the Jewish people and Muslims and stuff, you know how can they expect it not to go the way they want it to? One of my things about the gay and lesbian stuff. I have a non-biblical way to try to get the attention would be to ask those people that practice that lifestyle if it were not for physical relationship, intimacy between a man and a woman, how could they exist?

Perkins: Basic biology. You’re absolutely right. That’s why if you think about it, its logical conclusion would be if it were normal it would be extinct, the human race would be extinct within time if it were normal. So you’re right. Biology says the only we exist as human beings is that a man and a woman come together and we procreate. That’s the reason that government has long recognize marriage is because it is the place in which children are born.


Perkins leads a multi-million dollar organization with influence in Washington (we have to seriously talk about that one, God) yet he gives an explanation to oppose lgbt equality that ranks down there with two male college roommates engaged in a discussion three o'clock in the morning five minutes after they have finished off the year old-tequila they had stashed away and two minutes before they begin giving each other neck hickies.

Tony, if I wanted love like you are dispensing, I would have my pastor pistol whip me at church in lieu of a sermon.

Posted by BlackTsunami at 3:20 PM 2 comments:

Indiana Gov. Mike Pence To Address Anti-Gay Marriage Group -. No doubt Pence thinks he is following his "Christian duty" by opposing marriage equality Just like he probably felt it was his "Christian duty" to use doctored videos in an attempt to stop funding of Planned Parenthood when he was a Congressman. No offense, but this country would be better off without "Christians" like Pence as one of our leaders.

After 19 Months In Men’s Prison, CeCe McDonald Released - Sweet! She shouldn't have been in jail in the first place. She was only defending herself against a transphobic attack.

Creationists Offer Advice On Fighting 'The Homosexual War' - Please, please keep that advice to yourselves!
Posted by BlackTsunami at 9:03 AM No comments:

On his webpage, Peter LaBarbera is exploiting a Centers for Disease Control Fact Sheet to demonize the lgbt community:

A new fact sheet put out by the Centers for Disease Control and Prevention (CDC) reports a “troubling rise in syphilis infections among gay, bisexual, and other men who have sex with men (MSM).” The federal health agency reports that MSM “account for three quarters (75 percent) of all primary and secondary syphilis cases.” The CDC Fact Sheet, “Reported STDs in the United States: 2012 Data for Chlamydia, Gonorrhea and Syphilis,” states:

“Trend data show that men who have sex with men (MSM)* account for three quarters (75 percent) of all primary and secondary syphilis cases. Primary and secondary syphilis are the most infectious stages of the disease, and if not adequately treated, can lead to visual impairment and stroke. Syphilis infection can also place a person at increased risk for acquiring or transmitting HIV infection. Surveillance data from several major cities throughout the country indicate that an average of four in 10 MSM with syphilis are also infected with HIV.”

The CDC reports an 11.1 percent rise in primary and secondary cases of syphilis from 2011 to 2012, with 15,667 reported cases in 2012. It states that the “rate increase was solely among men, particularly gay and bisexual men.”


Now when anti-gay activists such as LaBarbera cite CDC data, they generally cherry-pick the data, making a big deal about the numbers but also omitting that the CDC has also pointed out how homophobia can play a part in these STD rates. This time, LaBarbera actually cites the CDC when it comes to homophobia, but with his own caveats:

As is typically the case, the (very pro-homosexual) CDC cites factors like “homophobia” and “stigma” to attempt to explain the high homosexual syphilis rates. The Fact Sheet states:

“Although a number of individual risk behaviors (such as higher numbers of lifetime sex partners or unprotected sex) contribute to disparities in the sexual health of MSM, other social and cultural factors may also play a role. For example, MSM with lower economic status may have limited access to health care and therefore may be particularly vulnerable to poorer health outcomes compared to other men. Complex issues like homophobia and stigma can also make it difficult for gay and bisexual men to seek appropriate care and treatment.”


LaBarbera probably considers this mention a way to for him to say "see, I am not cherry-picking." However, I think it illuminates his homophobia even  more. His snide remark about the CDC being "pro homosexual" is mind-boggling in its stupidity. The CDC doesn't show favoritism towards any group whose health issues it points out. The CDC is an objective organization which works to give the most accurate answers to health issues facing this country.

When you strip away that bull@! explanation LaBarbera attempts to throw at the CDC, you are left with a man attempting to walk a tightrope of logic, or lack thereof. He freely cites information to blame lgbts for bad health issues while at the same time admitting that the source of his information (the CDC) totally disagrees with his rational.

In other words, there is no need for anyone to point out LaBarbera's lack of integrity in doing this. And there definitely is no need to say that LaBarbera is a clueless, lying homophobe for his bad citation of CDC data.

LaBarbera is freely performing both of these tasks himself.

Thank you, Peter. I knew that sooner or later, you would see things our way.

Posted by BlackTsunami at 4:49 AM No comments: