You simply have to give up props to SC Attorney General Alan Wilson. He may not be on the right side of history regarding marriage equality, but he is brazen:

South Carolina's attorney general is asking a federal judge to toss out a challenge to the state's gay marriage ban.

Attorney General Alan Wilson argues in court documents filed Monday that a federal case brought by a same-sex couple in Charleston should be dismissed. He cites last week's federal appeals court decision upholding such bans in other states.

Wilson said the Sixth U.S. Circuit Court of Appeals decision that states have the right to set rules for marriage supports South Carolina's constitutional ban on same-sex marriage. Wilson noted the decision came in a case in which a court found no fundamental right to same-sex marriage.

The Charleston couple has asked a federal judge to rule in their favor without a trial.

Last month, the Supreme Court refused to listen to challenges to that particular decision, thereby upholding the Fourth District Appeals Court's marriage equality ruling for the state's in its jurisdiction, which includes South Carolina.

The only reason why gay couples aren't getting married in the Palmetto State is because Wilson has been hemming and hawing and jumping through every hoop in an effort to keep it from happening.

It's safe to say that Wilson's attempt today affirms just how desperate he is.

Come on, Alan. Give it up and turn it loose.
Posted by BlackTsunami at 2:42 PM 1 comment: 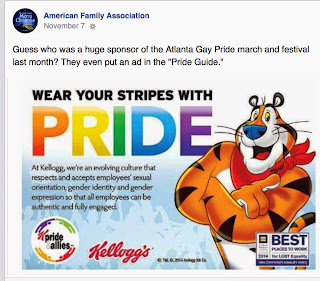 So the American Family Association is angry at Kellogg for sponsoring Atlanta's Gay Pride march and festival. One would think the organization would've have been angry about the strange relationship between those three elves promoting 'Rice Krispies.' What does "snap, crackle, pop" mean anyway?

Religious Right Aiming To Block All Obama Judicial Nominations - History repeats itself. Every time the Republicans win an election, the religious right take it as a cue to act the fool. Then they take it too far. They always do . . .

Uganda Could Pass Another Draconian Anti-Gay Law - And this one could be worse than the last monstrosity.

Two Brides Tie The Knot In Russia, Prompting Outrage - Bravery does not come from pleading victimhood status when you know you are in an insulated environment. It comes from things like this - putting yourself on the line for basic freedom.

My Lesbian Mom Died Terrified of Going to Hell - It's not right how people use religion to scare each other.
Posted by BlackTsunami at 9:05 AM 2 comments:

If you have seen this video, so what. See it again. In fact, view it every time you feel depressed, despondent, or overwhelmed by the anti-gay machine. Having the courage to stand up for yourself  knows no race, no age, and definitely no sexual orientation or gender identity.

Alex hasn't even left elementary school but he already has a firm grasp on his identity and what it means to be transgender. He wrote a rap about coming out to his mother and shared it on stage at Camp Aranu’tiq, a camp for transgender and gender-variant youth.

According to its website, Camp Aranu'tiq focuses on, "building confidence, resilience, and community for transgender and gender-variant youth and their families through camp experiences."