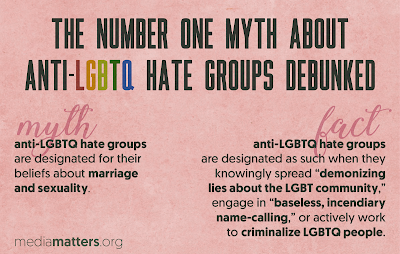 For 2018, as the LGBTQ community continues to fight tooth and nail for our equality, it is imperative that we do what we can to break down to America the lies perpetrated against us by groups and people who masquerade their homophobia and hate behind a religious veneer.

It is equally imperative that we don't get distracted by side arguments regarding religion in general or get tricked into having to defend or explain why we should be treated fairly. The onus needs to be on these groups such as the Family Research Council, the Alliance Defending Freedom, the American Family Association and their allies (such as Franklin Graham and Robert Jeffress) who will use whatever power they have in the Trump Administration to distort the narrative. They will claim they are merely attempting to "protect Christians." That's a lie, just like their last explanation (they are "defending marriage) or the one before that (they are merely trying to keep gays from getting "special rights") and so on and so forth . . .

This so-called culture war they talk about is about what it's always been about from the beginning - depriving the LGBTQ community of our dignity and God-given rights to equality and self-determination.  In the long run, it doesn't matter how many millions they have, how polished they are in front of the press, how many times they appear on Fox News showcasing their ability to tell one-sided distortions,  or how many times they can hide their animus, the bottom line is they are lying snakes wearing masks.

And there is only one way you can properly deal with lying snakes wearing masks - rip the masks off for the world to see. Don't give them any slack. Not even a little bit.

1. SPLC Labeled ADF A Hate Group Because Of Its Extreme, Demonizing Lies About LGBT People.

3. ADF Defended The Constitutionality Of Criminalizing Gay Sex In The U.S.

5. ADF Is Behind The National Push For Anti-LGBT “Religious Freedom” Laws.

8. ADF Believes In A “Homosexual Agenda” Dedicated To Destroying Christianity.

9. ADF Has Long Opposed Anti-Bullying Efforts In Schools And Even Launched The “Day Of Truth” To Combat The “Day Of Silence.”

These are only three, but there are so many more. One of our goals for 2018 should be to knock them down a peg and rip away their undeserved label of being groups for faith and family.

That's my goal. And I do not intend to fail.
Posted by BlackTsunami at 4:19 PM No comments: 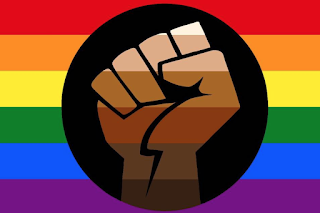 A Look Back At 2017’s Best, Worst and Ugliest Queer Political Moments - Actually this has not been a bad year. It was a trying year, but if there is no struggle there can be no progress. And it's good to see that our community hasn't lost our ability to fight. In addition, we are seeing new heroes taking their much deserved turn in the spotlight - i.e. the transgender community.

In 2017, LGBTQ Progress Was Built on Local Elections - Damn skippy!

17 Times the Trump-Pence Administration Attacked the LGBTQ Community in 2017 - And there are simply the top ones.

Ten Federal Judges Have Now Rejected Trump’s Transgender Military Ban - This is lovely. Trump is learning that he can't decided something as crucial as military service simply because he is in the Oval Office. There must be a GOOD REASON to make policy.

Minnesota Court of Appeals rules a transgender man's discrimination lawsuit against Starbucks can proceed - Let's see them try to the pull the "religious liberty" argument with this one.

Hornet’s Editors Pick Their 10 Favorite Celebrity Stories of 2017 - And you know we just love our celebrities.
Posted by BlackTsunami at 9:11 AM No comments: