Cowardice of conservative evangelical leaders should always be remembered

It's both fascinating and sad that on a day in which we honor Martin Luther King, Jr., a religious man who became the moral voice of where America should be in relation to the treatment of its poor and minorities, we see other religious figures failing to a righteous stand  by their own choice.

In the aftermath of Trump's racist comments regarding immigrants from Africa and Haiti, one would think that the evangelical conservative leaders who support him would step up. Very few have and those who haven't stand out for their lack of courage and desire to defend or distract.

James Dobson once excused Trump's excesses by calling him a "baby Christian." According to the Washington Post, he has refused to comment on Trump's words. 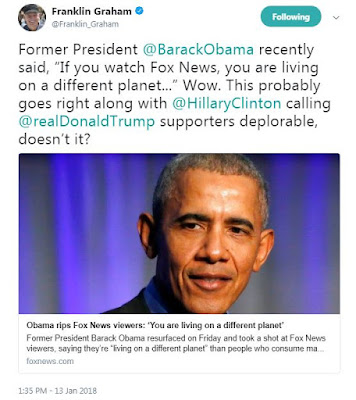 Then on Monday, he sent the following ironic tweet: 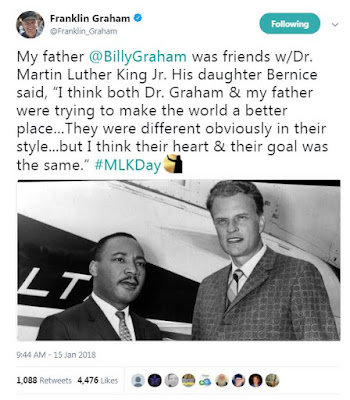 The Family Research Council chose to focus on attacking transgender children instead of addressing Trump's comments. Meanwhile, Ken Blackwell, a member of the group, attempted to defend Trump by completely distorting comments Obama once said about Libya.

These cowardly actions by conservative evangelical leaders shouldn't be forgotten. It really doesn't matter if no consequences will come of their words. It doesn't matter if they don't lose the support of their followers or that the media still regard them as "religious leaders."

What matters is that the truth be told about these leaders constantly and that truth never be far from the conversation about the things they do choose to take a stand on.

Or to speak plainly - the next time any of these jokers attack the LGBTQ community, I intend to say a couple of things about their embracing or ignoring Trump's racism.

Posted by BlackTsunami at 4:19 PM No comments: