You can tell that the fight over the Equality Act is heating up when you read nonsense like this Family Research Council tweet: 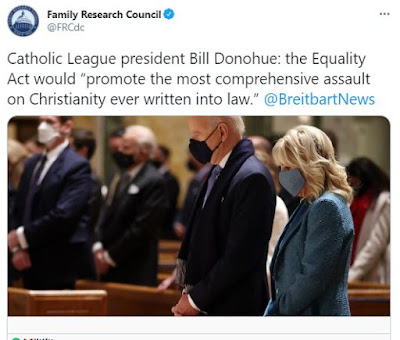 Donohue and the rest of the religious right as well as their allies in government have been heavily pushing the false argument that the Equality Act, a comprehensive LGBTQ rights bill which President Biden fully supports, will lead to all sorts of nasty consequences such as an attack on Christians (as the expressed in the above tweet.)
In addition, they are heavily promoting the false idea that the bill will destroy female sports (i.e. a ridiculous notion that trans women will dominate in girl's and women's sports and that some men will claim to be trans in order to compete against women.) That nonsense is akin to the bathroom predator smear they also push against trans women.
Exploiting fears of the unknown via spooky predictions and anecdotes is a common religious right tactic. They either outright say or imply that if LGBTQ people get so much as a single acknowledgement that they deserve basic rights, the country will collapse, children will be harmed, and Christians will be rounded up and imprisoned. These predictions, which generally turn out to be false, would be amusing except for how often they are taken in good faith and become legitimate topics of discussion.  And no matter how many times these predictions are proven wrong, the religious right and their allies are always able to tailor them around a new issue and the cycle begins again with their credibility undeservedly intact.
Look at what they said about marriage equality (gay marriage) before and after it was legalized by SCOTUS:
2013 - Republicans Predict Fraud, Bestiality if Gay Marriage is Legalized:

Rep. Louie Gohmert, R-Texas, told a group of Tea Party supporters on a conference call that gay marriage would be a slippery slope to polygamy and bestiality. "When you say it's not a man and a woman anymore, then why not have three men and one woman or four women and one man?" Gohmert asked. "Or why not, you know, somebody has a love for an animal or-? There is no clear place to draw a line once you eliminate the traditional marriage."

“This is something that I believe is the beginning of the end of Western Civilization,” (the Liberty Counsel's Mat) Staver told a conservative radio station in October. “You can’t simply redefine and pretend that ontological differences between men and women do not exist. This will have consequences.”

“If the courts rule that people have a civil right not only to be a homosexual but a civil right to have a homosexual marriage, then a homosexual couple coming to a pastor who believes in biblical marriage who says ‘I can’t perform that wedding’ will now be breaking the law . . . It’s not just saying, ‘I’m sorry you have a preference.’ No, you will be breaking the law subject to civil for sure and possible criminal penalties for violating the law…. If you do practice biblical convictions and you carry them out and you do what you’ve been led by the spirit of God to do, your behavior will be criminal.”

Florida Sen. Marco Rubio took a decidedly conservative turn on same-sex marriage in an interview with the Christian Broadcasting Network this week, warning that “there’s a real and present danger” that gay marriage proponents will cast the teachings of mainstream Christianity as “hate speech.”

In any facet of the religious right's attack on LGBTQ equality, the question should never be "how long will they be able to get away this dishonesty." or "how long will they be able to scare people with these lies" because we already know the answer. As long as they can get away with it.
The only way this can be combatted is when the news media loudly and directly hold these religious right groups and their allies to a decent standard of credibility instead of giving them a free pass simply because they anoint themselves as defenders of faith and religion.
Posted by BlackTsunami at 4:49 PM 1 comment: 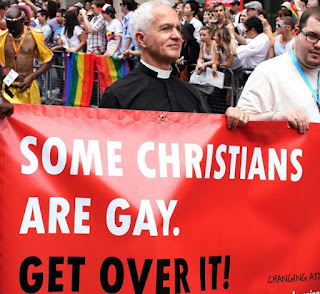 Baptist church will be expelled for welcoming a gay couple to services - Now you KNOW this is a dang shame. Simply an ugly thing to do.
Southern Baptists divided over politics, race, LGBTQ policy - And it's just the beginning.
When a Gay Person Resorts to Antigay Smears - Unfortunately, we've all been here.
Ex-Mich. House Speaker Chatfield’s opposition to LGBTQ protections cost him a six-figure job - Don't run any sh!t to me about "cancel culture." LGBTQ people are buyers and consumers just like everyone else and we have a right to make noise. The religious right started this practice, but we made it better.
Posted by BlackTsunami at 8:46 AM No comments: