Concerned Women for America outdoes itself with vile anti-gay campaign

This graphic is a perfect example of how low some so-called "family values" groups will stoop.

In this particular case the organization is the Concerned Women for America, no stranger to anti-lgbt graphics and cartoons no matter how vile.

But this one is especially vile:

Concerned Women for America (CWA) values the sacrifice of the millions of men and women who serve in the armed forces. Those service men and women and their families deserve our complete support in carrying out their mission. But today, many senators and representatives in Washington, D.C., have lost this simple focus, opting to support policies that make their jobs harder and, in many cases, actually harm their efforts to succeed in keeping America safe. The purpose of CWA's S.H.O.T. campaign is to send a clear message to our policy makers to "Stop Harming Our Troops!" Let them focus. And let them win!

Below are some CWA resources that highlight some of the problems we are facing and give you some great talking points so you can call your senator and let your voice be heard.

Also, make sure you CLICK HERE to check out the t-shirts, coffee mugs, stickers and many other materials you can get with our S.H.O.T. logo. Make a splash at the next townhall or tea party meeting with these great items that make a BIG statement in a very simple way.

Of course the number one problem according to Concerned Women for America is allowing lgbts to openly serve in the military:

Liberals have spent decades targeting the United States military with their demands for radical social restructuring in favor of homosexuality. As it applies to the military, their social policy agenda trumps all other considerations: the goal is not a stronger or better-prepared military. This paper seeks to clear up the confusion which exists on this topic. It will summarize the issues at stake so you will be equipped to understand the ongoing policy debates

And that's not even saying about what the graphic represents. Lgbts want to serve openly in the military because we love our country too. We are not the enemy here and to imply us as such is just plain nasty.

Concerned Women for America hints about the sacrifices of the millions of men and women who served in the Armed Forces. If the organization had any respect for those men and women (many of whom were lgbts) and their sacrifices, they wouldn't trivialize them with a such cynical ploy for money steeped in bad taste.

Posted by BlackTsunami at 2:49 PM 5 comments: Links to this post

Another bad day for the National Organization for Marriage’s Giant Flop tour - This is hilarious!

Posted by BlackTsunami at 8:54 AM No comments: Links to this post 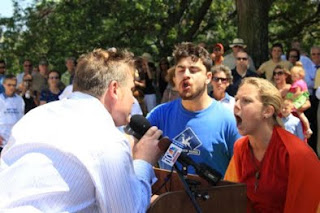 The above photo is a scene from the National Organization for Marriage's "Summer for Marriage" Tour which you will probably be seeing a little more of.

This tour has been a failure because in many places, the protestors have outnumbered NOM supporters.

No doubt Brian Brown, head of NOM and the guy with the microphone, meant for the picture to show how supposedly intolerant lgbt activists are.

Before this talking point even takes root, Brown needs to address the situation regarding a participant of his tour, Louis J. Marinelli.

At one stop, Brown claimed that his group supports the "dignity of all persons."

But amongst other things, Marinelli once remarked in a video that:

. the homosexual agenda is really about the 3 Ps: prostitution, pedophilia, and polygamy.

And on that note, before taking pictures of people to cast negative images of them, maybe Brown should police the nasty rhetoric of other NOM allies instead of attempting to dance around them.

Seems to me that before Brown and NOM attacks the so-called intolerant angry lgbt activists, he would be better served to examine why they are angry.

National Organization for Marriage - gays were never hunted down and murdered like 'Jews, Christians, and blacks'

Posted by BlackTsunami at 4:51 AM No comments: Links to this post