Way to go, Donald Trump. And in case you can't tell, I'm being extremely sarcastic.

From my friends at Raw Story:

On Wednesday, President Donald Trump announced that he was putting Vice President Mike Pence in charge of the task force to combat the coronavirus pandemic, touting him as a former governor experienced with health care.In reality, though, Pence’s record on health care policy is extremely checkered — and his fitness to lead up such a task force is questionable.

When Pence was governor of Indiana, he oversaw an entirely preventable AIDS disaster in Scott County. Pence dragged his feet on implementing a recommended needle exchange program, out of a religiously motivated belief that doing so would make him a party to intravenous drug use — even though studies show clean-needle programs do not increase drug use. By the time Pence finally relented and let the program go forward, over 200 people had contracted HIV – in a county of less than 24,000 people.


The Huffington Post went into detail about the missteps taken by Pence, showing a timeline which it said " reads like a roadmap of what to do if you want to create a public health crisis."

The question is will these missteps be replicated. Raw Story had this to say:

Since Pence became vice president, he has been one of the administration’s foremost architects of health care policy. Several staffers and advisers from his Indiana days came with him to the Department of Health and Human Services, like Secretary Alex Azar, Surgeon General Jerome Adams, and Medicaid and Medicare Administrator Seema Verma — and they have spent a great deal of energy imposing their ideological beliefs against the interests of public health. Verma, for example, spearheaded a push for states to require Medicaid recipients to provide proof of employment to keep their coverage, a policy which led to tens of thousands of people being kicked off the program in Arkansas alone.


Let's hope that Pence doesn't screw this one up. Granted, the gloating from the right-wing will be enormous if he doesn't, but I fear the alternative.
Posted by BlackTsunami at 5:08 PM No comments: 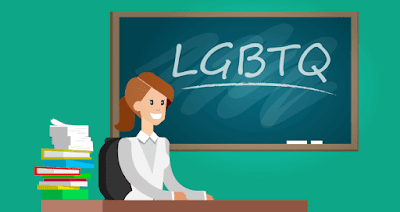 A Missouri bill demonstrates the dual sad and comical mindset of those who think that it's dangerous for children to even know that the LGBTQ community exists.

From KMBC News in Kansas City:

State law could be changed to require that Missouri public school districts tell parents if class material, guest speakers or displays in school mention sexual orientation or gender identity, according to a report from MissouriNet.

The Missouri House Elementary and Secondary Education Committee is debating state Rep. Chuck Basye’s bill that would let parents have their kids removed from class if they do not approve. Basye, R-Rocheport, said the bill is in response to a Columbia middle school Gay/Straight Alliance Club putting posters up without parents knowing. “I think the parents have a right to know what is in front of their children in public schools,” Basye told MissouriNet. “That’s the intent of the bill, nothing more, nothing less.”

Under the legislation, Missouri schools could be sued for violating the terms. Basye, the chairman of the committee, says parents' concerns “tend to fall on deaf ears.”

“A lot of people, a lot of parents feel that they’re not listened to, by whether it’s the school board, the administration, or what have you. That’s the design of the last part of this bill is to give this a little bit of teeth so parents can take action if they feel that they’re not being listened to or their child is subjected to something they don’t agree with,” Basye told MissouriNet. Rep. Raychel Proudie, D-Ferguson, says the measure treads on dangerous ground. She has served as a schoolteacher and counselor in public and charter schools in Missouri and elsewhere.

“I would argue there’s no better place for information or a learning place than a school setting,” Proudie told MissouriNet. “I don’t see any like nude pictures or questionable words as far of obscenities on here. So, I’m not really clear what the issue was with this. If I put ‘Jesus Saves’ up, though, I could certainly see how my Jewish student would have an issue with that. I don’t take offense to your wanting to be involved in your child or your children’s education and the education of your community. But, I do insist that we’re not just talking about sex and sexuality but the actual worthiness and personhood of a group of individuals.”


Let's be clear. This bill is nothing more than a way to target the LGBTQ community. And that's because some folks are insistent on pigeonholing our lives as nothing more than their ideas of how we have sex. Furthermore, they are not satisfied until they make communities - and us - affirm their prejudices.

Not only that, but we've been down this road before. And it took us to the Supreme Court.

Read more »
Posted by BlackTsunami at 4:40 PM No comments: