It's about about not 'religious freedom.' It's about homophobia.


The news that the Trump Administration's Health and Human Services is providing a waiver for a "faith-based" adoption agency in South Carolina to discriminate against non-Christians - and especially the LGBTQ community - while still being allowed to receive tax dollars has gotten a lot of folks angry. And understandably so.

With that in mind,  I am pulling a few posts out of the archives to show just how evil and ingrained this plan is with anti-LGBTQ groups and leaders undermining same-sex families under the guise of "religious freedom."

Anti-LGBTQ hate group employee defends anti-gay adoption law with skillful evasion - Speaking of the Alliance Defending Freedom, the organization has its hand in almost every anti-LGBTQ legislation or court action in the country. I had a very interesting twitter talk last year with a spokesperson, Kellie Fiedorek, about a piece of Oklahoma passed. The conversation demonstrates the depths that groups like ADF and people like Fiedorek will stoop to in order to avoid  the specific issue. Instead, they attempt to portray the LGBTQ community as at fault for merely defending our rights as taxpayers. Their argument  "if gays don't simply allow themselves to be discriminated against, they are preventing children from receiving good homes" is ugly and specious on so many levels.

Family Research Council: LGBTQ rights shouldn't be protected under law because of children & 'health hazards' - While not about adoption, specifically, this is why the clarion call about protecting the "religious liberty" of so-called "faith-based" adoption agencies is a lie. The Family Research Council, one of the main groups making this argument doesn't think that LGBTQ rights should be protected under law in the first place because according to it, we are health hazards who are a danger to children.


It all basically comes down to what I said in The Advocate last year:

"For decades, conservative voices have been attacking LGBTQ people with carefully worded rhetoric. “Before they were trumpeting ‘religious liberty,’ they were all about ‘protecting marriage. Before that, it was attempting to stop gays from receiving ‘special rights.’ And let’s not forget when all of these other buzzwords don’t do the trick, there is ‘protecting children.’ That always works. I show that behind all of their buzzwords and claims is one goal: harming the LGBTQ [community] and undermining our rights and safety.”

Posted by BlackTsunami at 4:54 PM 2 comments: 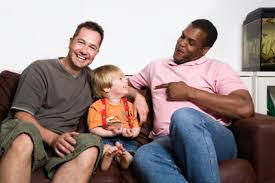 Trump gives South Carolina foster agency the right to discriminate against LGBTQ & Jewish people - With all of the madness in the Trump Administration, people are missing a lot of things. Unfortunately, a passive-aggressive war on same-sex families is on of these things. By weaponizing Christianity, right-wing evangelical groups and public figures are deliberately undermining the ability for LGBTQs to form and take care of their families. Bear in mind that the situation here in South Carolina only scratches the surface.

Christians launch deceptive social media campaign targeting gay parents - My article in LGBTQNation last year speaks on this. There is a coordinated effort to use Christianity as an excuse for "faith-based" (i.e. right-wing evangelical leaning) adoption agencies to be able to receive tax dollars while also being able to refuse to service gay clients. If this is successful, don't be surprised to see these "faith-based" adoption agencies receiving a huge share of of taxpayer funds, undermining the ability of the LGBTQ community to foster and adopt children and to generally have families.

Report shows landscape for same-sex couples wishing to adopt can be "bleak" in states with religious exemptions - A report from last year breaks it down.

Just proof how the anti-LGBTQ industry covertly works against us. They don't outright deny us the right to have families. They simply make things a bit more difficult.

A shockingly high number of nonbinary people are denied health care in the United States - This shouldn't be happening.

LGBTQ leaders warned about a Trump presidency. Two years later, it’s clear they were right - Yep.
Posted by BlackTsunami at 9:23 AM No comments: