Editor's note - I apologize to those who were expecting my daily midday news briefs. But as you can see, religious right groups and figures are especially ornery today. It must be the beginning of a season.

The People for the American Way has come out with an excellent report on the ways religious right groups are attempting to undermine efforts to protect lgbt children in schools.

The report, Big Bullies: How the Religious Right is Trying to Make Schools Safe for Bullies and Dangerous for Gay Kids, should be mandatory reading for all of us who care about keeping our lgbt children safe.

Among the highlights is a detailed table of contents listing a host of religious right distortion techniques used to derail anti-bullying efforts:


The introduction says it all:

Students deserve an education that is free from bullying and harassment, and in many districts parents, teachers, principals, community members and students are working together to create a safe and welcoming environment for all children. Bullying can impede learning and ruin lives. As Education Secretary Arne Duncan has said, “bullying is doubly dangerous because if left unattended it can rapidly escalate into even more serious violence and abuse.” Close to nine in ten Americans believe that bullying is a “serious problem,” and many communities are directly challenging harassment and violence in schools.

However, many Religious Right activists want to derail efforts to combat bullying. An increasing number of conservative leaders and organizations have fiercely opposed anti-bullying programs developed by schools and education groups for the sole reason that such programs identify and attempt to combat the widespread bullying of LGBT youth.

Rather than recognize and address the problem of bullying against students who are gay or perceived to be gay, Religious Right groups want schools to embrace a policy of inaction. Many resort to repeating discredited lies about sexual orientation and vilifying the LGBT community and its allies to back up their opposition to anti-bullying programs that mention anti-gay bullying. Concerned students, families, teachers, education professionals, and public officials should not be fooled by the far-right’s attempt to smear anti-bullying programs, and should instead ensure that schools address bullying with a direct, honest and comprehensive approach.

So apparently that nonsense we saw this morning from Peter LaBarbera about GLSEN only scratches the surface of religious right chicanery and lies.

Again, read this report, save it, and send it out to as many people as possible.

Those who read this blog know that I'm not necessarily that much a fan of gossip columnist Perez Hilton.

I will admit that at times I look at his site, but mostly he is a bit too juvenile for my tastes. And his unnecessarily crude comments towards beauty pageant contestant Carrie Prejean started a controversy which made Prejean a religious right cause celebre (that is before those pictures came out).

However it seems that in light of the situation involving lgbt teen bullying, Hilton is attempting to soften his image. And that includes writing a children's book entitled The Boy With Pink Hair.

The news of this has elicited many comments - some positive, others negative.

But for my money, none are more negative than that of Peter Sprigg of the Family Research Council. Sprigg, who usually busies himself manufacturing inaccurate studies about lgbts, took the time to make a sly suggestion in The Washington Times regarding Perez and "an interest in children:"

“He does have a known interest in children,” says Peter Sprigg, a senior fellow for Family Policy Studies at the Family Research Council, “having published a photo of teen star Miley Cyrus that could have been considered child pornography.

The picture Sprigg is speaking of is that of Cyrus which Hilton published in 2010 while she was getting out of a car while supposedly not wearing any underwear. Cyrus at the time was 17.

Hilton asserted that she was in fact wearing underwear and he published the picture "to teach her a lesson about getting out a car in a ladly-like fashion."

For all of the talk  about Hilton and "child pornography," the controversy died out. And that's because it was a stupid controversy pushed by a stupid need by Hilton to gain attention for his blog.

And I am by no means defending Hilton's actions. But for Sprigg to assert in any fashion that Hilton is a pedophile is nasty. Of course Sprigg never came out and said the word "pedophile," but we all know what he means by "interest in children."

Hilton is a gossip columnist and subsequently he publishes salacious items and pictures regarding celebrities. The credibility of him writing a children's book is definitely subject for discussion. But Sprigg's assertion of pedophilia seems to be more directed towards Hilton's sexual orientation rather than his vocation.

It only goes to prove that no matter what the situation may be regarding the lgbt community (like this morning's post about GLSEN), members of the religious right just have to work in a dig about lgbts wanting to "harm children."

It's like a sickness. They can't seem to help themselves.

GLSEN the victim of a homophobic smear days before annual event

This morning, Peter LaBarbera came out with what he called a "breaking story" on his Americans for Truth webpage:

The GLSEN ”Gay-Straight Alliances” Facebook page was also linked to a  “Gay Trip Thailand” Facebook page with shirtless Thai males — luring men to that notorious sex-tourism destination — as well as a movie about two male lovers that is sponsored by a leading “gay” pornographic video distributor. When the salacious links were exposed April 11 by Mission America, a pro-family group, they were quickly removed from the GLSEN Facebook page.

Here is the clip he saved: 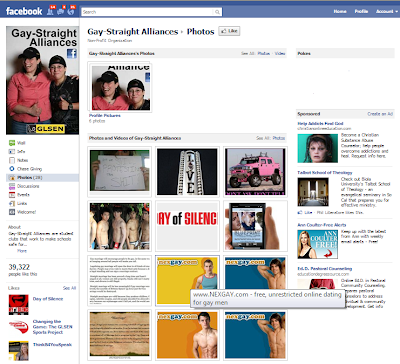 There are so many things wrong with LaBarbera's assertion. First and most importantly, GLSEN had nothing to do with this page. It has several banners advertising GLSEN events, such as the Day of Silence, but there is nothing on this page calling it an "affiiliate of GLSEN" or - as LaBarbera put it - The "GLSEN "Gay-Straight Alliance" page.  The page, Gay-Straight Alliances, seems to be a generic page supporting gay/straight clubs.

Furthermore if you will notice - the pictures which allegedly appeared were in the photo section of this page. Anyone can join this page and place photos there. Also, notice how those alleged photos are grouped together, as if someone put there all there at the same time.

What I am saying is that the most, this was an ugly practical joke by someone with a nasty sense of humor. And at the very least, this was a nasty set-up created to harm GLSEN days before its annual Day of Silence event.

According to LaBarbera, the group Mission America discovered the photos. Mission America is a vicious anti-gay group led by one Linda Harvey. Mission America was one of the sponsors of LaBarbera's latest so-called Truth Academy. Furthermore, Harvey has said lgbts or anyone supporting lgbt equality shouldn't be around children because they would cause children to be molested. Recently she said the so-called "gay agenda" was responsible for the spate of lgbt teen suicides.

I am not saying definitely that LaBarbera and Harvey conspired here. But there is something fishy about the fact that Harvey's group - which has affiliated with LaBarbera in the past - just happened to find semi-pornographic pictures on this page.

This faux GLSEN controversy allowed LaBarbera to list all sorts of graphic details about gay sex - which I won't publish here - like he used to do in his olden days.

the alleged Fistgate controversy, which the organization had nothing to do with,

and the false claim that GLSEN founder Kevin Jennings did not report an underage child having sex with an adult male. The young man - Brewster - was not underage at the time and in a later interview credited Jennings for being there for him at a time at which it was difficult for young lgbts to confide in anyone.

Here is the gist of this so-called controversy:

The alleged Facebook page is NOT affiliated with GLSEN other than giving support to some of its events.

Secondly, we don't know HOW those pictures got on that page (they have been scrapped off as of now, so my guess is that as soon as the page administrator saw them, he or she deleted them).

LaBarbera and Harvey have a lot of questions to answer. Just how did Mission America just happen find these pictures. And if these pictures were on the page for "several weeks" - like LaBarbera asserted - why are we just hearing about it now.

One thing is clear though - if this turns out to be a manufactured controversy (and I am not saying by whom), the parties behind it - and they who know they are - are pretty damned pathetic.

Posted by BlackTsunami at 5:00 AM 2 comments: