No matter how this thing with Trump ends (and I am hoping for a loud, highly destructive crescendo for our Orange menace), I sincerely hope that no one forgets how the evangelical right bent over backwards to ignore or defend his many, many excesses. In fact, when the loud, highly destructive crescendo for Trump happens, I hope they are caught up in the middle of it.

The tweet Franklin Graham sent out Monday underscore my hopes:


I wish President @realDonaldTrump’s enemies would give it a rest. For 2 years all the American people heard was collusion. Not true. Then accusations seemed to come out of the woodwork by various women. Then all we heard was impeachment. Now it’s a whistleblower claim.
— Franklin Graham (@Franklin_Graham) September 23, 2019 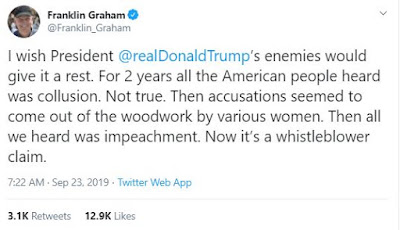 So Graham is pushing this idea that Trump is being unfairly targeted. Well let's look at the claims he pushed aside in his tweet.

1. The accusations from 17 women accusing Trump of inappropriate behavior, including sexual harassment and assault did not just come out of the woodwork. Trump has been accused of this long before he ran for president. And there is the infamous Hollywood Access tape - i.e. the "grab them by the pu##y" tape.

2. Then there was the Mueller report which found 10 possible incidents of obstruction in the Russia investigation perpetrated by Trump. The idea of "no collusion" is  a straw man argument created by Trump and his supporters, such as Graham. Mueller himself said he didn't "evaluate collusion."

3. So now we come to the latest. A whistleblower complaint about Trump's promise to the leader of a foreign country as well as "multiple acts" is turning out to look like Trump was exploiting the power of the White House. Why?  To get the Ukraine to investigate alleged wrong doing by Joe Biden in preparation for the 2020 election. While Trump and his allies are spinning, his Administration has refused to release the original complaint.

Read more »
Posted by BlackTsunami at 5:22 PM No comments:

Angelica Ross Leaves Twitter After Abuse by Trump, Sanders Supporters - This is a MESS and it needs to be addressed.

The Highlights of The Advocate's Historic LGBTQ Presidential Forum - Worth mentioning and remembering.

Here’s the LGBTQ Supreme Court Case Laverne Cox Brought Up on the Emmys Red Carpet - Visibility matters. That's why Fox News makes sure not to talk to one of us when "reporting" on our issues.

Last, but not least, HISTORY was made at the Emmys last night! 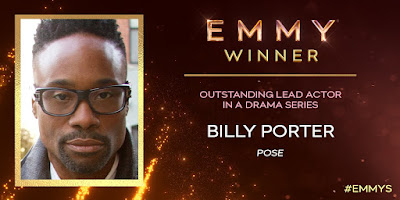 Posted by BlackTsunami at 9:22 AM No comments: