I've written about Abigail Shrier several times. She is the author of Irreversible Damage: The Transgender Craze Seducing Our Daughters, a book which makes negative and false claims about transgender people, particularly transgender youth.

As you can guess, the book is highly controversial, with Shrier basking in all of the infamy and attention. She has also skillfully exploited recent controversies to make it seem that she is a victim of censorship. To hear her and her supporters tell it, transgender activists and others on the "left" are attempting to "cancel" her and ban her book simply because she supposedly dares to have an opinion opposite from theirs. Or because she is simply "asking questions." 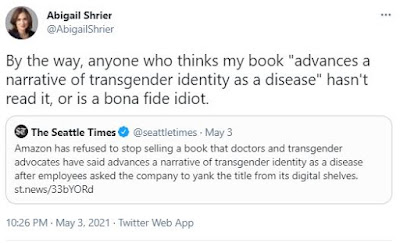 What's so funny about this tweet is that it belies a paper trail of Shrier going on podcasts and television advancing the narrative she claims that she isn't advancing:
Joe Rogan and guest Abigail Shrier equate being trans to having anorexia, joining a cult, and “demonic possession”
Fox’s Tucker Carlson and guest Abigail Shrier spread medical misinformation about trans youth
Read more »
Posted by BlackTsunami at 9:21 PM No comments: 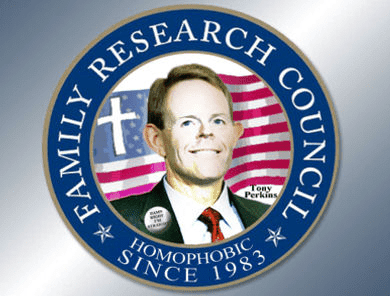 In its attacks on the transgender community, the Family Research Council is getting sloppy And by sloppy, I mean telling easily refuted lies and boldly showcasing its own hypocrisy.

First, let's talk about the lie. In blog posts on its site, FRC spins conspiracy theories about transgender people.  This particular post, To Counter The Transgender Lie, We Must Speak Truth, is a yawner much akin to what the group used to say about gays. But to me, one part stood out:

A 2011 U.S. study found that 41 percent of transgender participants reported attempting suicide in comparison to 1.6 percent of the general population. Is this because people aren’t accepting of them or because they have mental health problems the rest of the population does not? The Centre for Suicide Prevention says on its website that transgender people experience mental illness at a much higher rate than the general population. While 6.7 percent of the U.S. general population suffers from depression and 18 percent grapple with some form of anxiety, nearly half of all people who identify as transgender experience one or both of these issues. Telling these people that they should try to change every single part of their physical bodies in order to feel better is abhorrent. Their problem is not in the body, it’s in the mind.

FRC is implying that trans people have a high rate of suicide and mental illness not because of non-acceptance, but because supposedly trans people have mental health problems in general. There is just one problem with FRC's inference. Or in this case, three.  All three of the links FRC supplies specifically say that problems regarding suicide and mental illness when it comes to trans people is because of the non-acceptance of society.
The first link is the results of a survey by the National Center for Transgender Equality and the National Gay and Lesbian Task Force.
The second link is a fact sheet about transgender people and suicide from the Centre of Suicide Prevention
And the final link is a December 6, 2016 article from Psychology Today entitled Why Transgender People Experience More Mental Health Issues.
In other words, FRC cherry-picked information from these sources to make a negative point about trans people while omitting that the sources in general refutes the negative point the group is attempting to make. Now that's just sloppy.
But if you think that's brazen of FRC, then check out the following tweet the group sent out today: 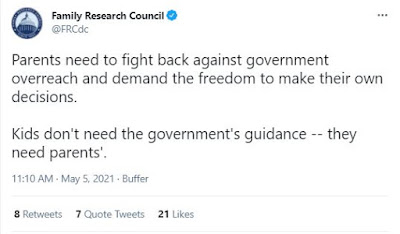 Keep in mind that the Family Research  Council has given full support to state legislation across the country which would ban trans kids from receiving suitable and affirming healthcare even though said legislation has been opposed by a myriad of medical professionals and  . . . wait for it . . . parents.
Texas is even considering a bill which would label parents who support gender affirming care for their children as "child abusers." They would jailed and their children could be taken from them. No doubt false horror stories about affirming care for trans children (including a lie by FRC that affirming care included chemical castration) led the state to consider such a travesty of a bill.
Maybe the Family Research Council doesn't think that parents who support their trans children qualify as "real parents."
Posted by BlackTsunami at 5:13 PM No comments:

White House: Biden to use bully pulpit to back transgender youth - Good.
Tennessee is trying to sneak a ban on important gender-affirming care for trans youth into law - Those jerks never come up for air.
The Mitchells vs. The Machines Has a 'Rad' Message of Queer Acceptance - Could be next year's Oscar winner for 'Best Animated Feature.
17 Exciting Queer Books to Savor This Summer - A really good list.
'Stop hurting us': Transgender people denounce Caitlyn Jenner's sports remarks - Just putting this here, but the less said about Caitlyn Jenner and her betrayal of her own people, the better.
Posted by BlackTsunami at 8:54 AM No comments: