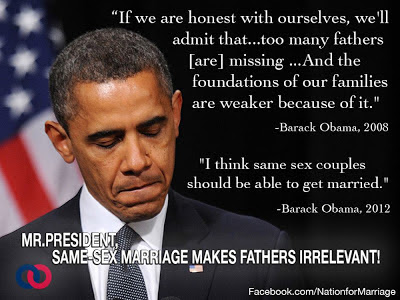 Number one on the Top Ten Chart of Tackiness is the above graphic by the National Organization for Marriage.

It's pathetic on so many levels. At least allow me to count off three:

2. It blames same-sex families for the single-parent homes and takes President Obama's words out of context. At no time has President Obama ever blamed same-sex households for fatherless homes. Jeremy Hooper said the following:

When President Obama uttered those words, he was referring to the very specific problems of dads who played a role in creating a family only to abdicate responsibility. That is an issue—one that we should solve. Same goes for when mothers step out on families that they should support. In an ideal climate, we could all agree on this.

In a less politicized world, we could hope that all human beings would take responsibility for whatever family form they, by virtue of their own choices, created.

But in the aggressive world that NOM is forcing on us all? Gays are the scapegoat. Our families come at an expense. A penis and a vagina are innately better than a doubled set (regardless of any other qualities attached to the genitalia). Homes like mine are on par (or worse than) ones where a father walks out on his children. And of course our President cannot make a strong statement about

But one good thing does come out of NOM's graphic. It exposes just how low the organization will stoop to attack same-sex families and households.

Why gay community will win the fight for marriage equality

I really believe that when it's said and done, the lgbt community will win the marriage equality fight. Marriage equality is about fairness, love, and equality. And let's face it, though our opposition is well-connected and has much money,  it will be their rhetoric in opposing our right to marry each other which will be part of their undoing. Especially when one compares their hyperbolic rhetoric to the reality:

Glenn T. Stanton of Focus on the Family: "This is a really pernicious lie of Satan to say that the gender part of humanity doesn’t really matter because the gender part of humanity is really denying the distinct God imaging in each of us as males and females. We need to understand that as Christians. That’s the biggest thing. The other is that, ‘you know kids don’t really need a mom and a dad they just need any configuration of loving adults who care for them,’ . . . As a good friend of mine says, ‘you know a lot of these people advocating for same-sex marriage, I’ve been in the marriage work for decades, I’ve never seen these people come to the stump to advocate for marriage, the only time they are for marriage is when it has same-sex in front of it.’ Think about that. These are not advocates of marriage; they’re advocates for redefining marriage."

Mat Staver, The Liberty Counsel: "Basically marriage will be completely destroyed, families will be destroyed, children will be hurt by this and freedom of speech and freedom of religion, including in the pulpit itself, will absolutely be bulldozed over. This would open a floodgate of unimaginable proportions. That’s why with those kinds of consequences to have five of the nine justices ultimately have this kind of power in their hands, that’s not how this court and this country was established, to have five individuals to be able to have that kind of catastrophic, social re-engineering power in their hands, that’s just not something that was envisioned by the founders." 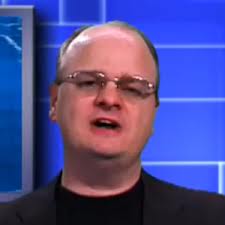 Gordon Klingenschmitt, anti-gay activist and "exorcist" - "Every kid deserves a mom and dad. We must defend traditional marriage. Sadly, Obama equates sin with holiness, confusing lust with love, thereby confusing the demonic with the Holy Spirit, when Satan can never be equal with God. There is one reason homosexual sodomy will never be "equal" to traditional marriage: Satan will never be equal to God."


I could say more, but is there any need? One side spins tales of revolution, destruction, and Satanic possession. And the other side simply shows basic love. Sure, I am preaching to the choir with this post but people forget that sometimes a choir needs practice and in this case, our choir needs to remember that we have beautiful voices which sound like angels when we sing together in harmony.

Lastly, we need to remember what  we are singing for.

Love, honey. The most powerful emotion in the universe.

Hat tip to Right Wing Watch for the religious right quotes.
Posted by BlackTsunami at 9:26 AM 2 comments:

Family Research Council angry at Obama for cleaning up its mess

As to be expected, the Family Research Council didn't care for President Obama's State of the Union address.

The organization particularly didn't care for the part where President Obama mentioned equal treatment for same-sex military couples. FRC especially didn't like the announcement before the SOTU speech that the Pentagon would be giving some benefits to these same-sex couples. And the brazen hypocrisy in which FRC engages in to criticize this will astound you:

. . . Hours before his State of the Union address, the commander-in-chief gave his Pentagon the thumbs up to hundreds of thousands of dollars in new spending for homosexual partner perks. Starting August 31, the same-sex boyfriends and girlfriends of service members will be eligible for privileges that even cohabiting heterosexuals are not: military ID cards, access to military commissaries, gymnasiums, and movie theaters, participation in family support programs on bases and posts, and the chance to fly on Defense Department aircraft on the taxpayers' dime.

For a liberal movement so intent on policing discrimination, this policy is full of it! The U.S.government has decided that what you do in the bedroom qualifies you for federally-subsidized benefits (unless you happen to be heterosexual, like 96.6% of the U.S. population). Once again, it's exclusion in the name of "inclusion." Under this policy, Washington is officially in the business of incentivizing homosexual behavior in our military--an observation that appalls veterans like Senator Jim Inhofe (R-Okla.).

"The President is eroding our military's apolitical stance and forcing conformity onto the rest of society by pushing his liberal social agenda through the Department of Defense. In a weak attempt to not violate the Defense of Marriage Act, the administration is using a play on words by saying 'same sex domestic partners' can have access to benefits instead of 'spouses.'"

What's more, Sen. Inhofe points out, America is on a "slippery slope" with this kind of preferential treatment. "Why would the DOD extend benefits to same-sex partners and then deny cohabiting heterosexual couples the same benefits? The Department of Defense is essentially creating a new class of beneficiary that will increase costs and demand for limited resources that are currently available for military families, active and reserve forces, and retirees.


Why indeed would the DOD extend benefits to same-sex partners and then deny cohabiting heterosexual couples the same benefits?

Maybe because the cohabiting heterosexual couples generally have the option to get married, whereas the same-sex couples do not have that same option in most cases.

Also while some states offer same-sex couples the option of marriage, there is that annoying little pesky law called DOMA (Defense of Marriage Act) which precludes the federal government from recognizing same-sex marriages.

And here is the kicker. Anti-gay activist Robert Knight helped to craft DOMA while he was an employee of the Family Research Council.

The sad irony is that while FRC dismissively refers to same-sex couples as "boyfriends" and "girlfriends," it is because of efforts like groups like FRC that these couples aren't considered to be more than that by the federal government.

It's the equivalent of criticizing someone for being in a hole while omitting the fact that you are the one who put them there in the first place.
Posted by BlackTsunami at 5:04 AM No comments: