Only the Family Research Council would have the audacity to depart briefly from its daily bout of Trump butt-kissing to mourn the 50th anniversary of MLK's assassination and exploit the occasion for its own purposes: 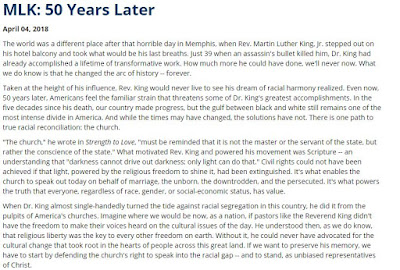 The world was a different place after that horrible day in Memphis, when Rev. Martin Luther King, Jr. stepped out on his hotel balcony and took what would be his last breaths. Just 39 when an assassin's bullet killed him, Dr. King had already accomplished a lifetime of transformative work. How much more he could have done, we'll never now. What we do know is that he changed the arc of history -- forever.

Taken at the height of his influence, Rev. King would never live to see his dream of racial harmony realized. Even now, 50 years later, Americans feel the familiar strain that threatens some of Dr. King's greatest accomplishments. In the five decades since his death, our country made progress, but the gulf between black and white still remains one of the most intense divide in America. And while the times may have changed, the solutions have not. There is one path to true racial reconciliation: the church.

"The church," he wrote in Strength to Love, "must be reminded that it is not the master or the servant of the state, but rather the conscience of the state." What motivated Rev. King and powered his movement was Scripture -- an understanding that "darkness cannot drive out darkness; only light can do that." Civil rights could not have been achieved if that light, powered by the religious freedom to shine it, had been extinguished. It's what enables the church to speak out today on behalf of marriage, the unborn, the downtrodden, and the persecuted. It's what powers the truth that everyone, regardless of race, gender, or social-economic status, has value.

When Dr. King almost single-handedly turned the tide against racial segregation in this country, he did it from the pulpits of America's churches. Imagine where we would be now, as a nation, if pastors like the Reverend King didn't have the freedom to make their voices heard on the cultural issues of the day. He understood then, as we do know, that religious liberty was the key to every other freedom on earth. Without it, he could never have advocated for the cultural change that took root in the hearts of people across this great land. If we want to preserve his memory, we have to start by defending the church's right to speak into the racial gap -- and to stand, as unbiased representatives of Christ.


Little advice, Family Research Council? First, let's not be so quick to patronize. Turning the tide of racial segregation was a group effort and Dr. King himself would probably say that he didn't come anywhere close to almost single-handedly doing it alone. There were a multitude of folks involved from prominent African-American leaders to vibrant, brave marchers, to especially the black maids and other domestic workers who gave their nickels and dimes and other assorted monies to fund the movement. And let's not forget Bayard Rustin, the black gay man who coordinated the 1963 March on Washington. You should especially take him to heart before you begin your usual tangents about "radical homosexual agendas."

Secondly, instead of pretending to mourn King while exploiting his assassination to push for your bastardized version of "religious liberty," how about you unattach your lips from Donald Trump's rear. Stop providing a cover for his racially insensitive actions and comments. Stop using the "we all need to pray" card as an excuse to weasel out of being a true moral voice. Stop cheerleading  Trump's attempts to divide America by lies and resentment. And stop cheering his attempts to disenfranchise the poor and wreck health care.

On the risk of sounding presumptuous, I tend to think that if Dr. King were still alive, he wouldn't necessarily be a fan of yours.  So stop pretending that you are a fan of his.

Posted by BlackTsunami at 5:02 PM No comments:


Tucker Carlson: There is no trans community - I don't know with that boy. He used to be somewhat of a decent journalist.

Laura Ingraham Once Sent A Student Reporter To Secretly Tape LGBTQ Group - If it were me she had done that to . . .