One of the problems with having to deal with negative gay images on television and in the movies is that it taints efforts to push three-dimensional images.

No one is completely good nor evil, and the images we see should reflect that. However when a group is faced with having to see nothing but negative images, it makes them hypersensitive to the point that they rail against any image deemed negative while totally forgetting that a good two-shoes image of the gay community is as debilitating as a negative image.

With that in mind, I bring you Shameless, a Showtime television drama which is based on a British drama of the same name.

It tells the story of a dysfunctional family led by an alcoholic father. All of the characters are interesting, to say the least.

However for the purpose of this blog, I want to focus on one of the children, Ian.

Ian (Cameron Monaghan) is a 15-year-old gay young man working at a grocery store. He is having an affair with his employer, the Muslim owner. He is also messing around with the local thug, Mickey.

He is a perfect example of what I was talking about earlier. Ian is a very complex character.  One could say that he is the anti-Glee character. No doubt, he would give both folks on the left and the right in this so-called culture war extreme palpitations.

I personally like the characterization. He is merely a young man dealing with life has thrown his way, whether it be a dsysfunctional family life, or a gay orientation.

The following clips shows several scenes in Ian's life, particularly his relationship with Mickey. The thing I really like about this relationship is how it's not sugarcoated. Pay special attention to 2:30 to 4:10. Some folks may find it a bit intense:

NOM Fail: 'What sound does cash make?' edition - The irony is rich. NOM attacks Cuomo for getting campaign donations due to his push for marriage equality while it continues to hide ITS donors.

Nicolosi Retracts Claim of Gay Cure through Antidepressants - Another anti-gay lie down the drain.

Minnesota for Marriage pushes “polls” via web ads - So NOM is now pushing phony push poll ads in Minnesota. Love what that secret money can buy. Of course the goal of these ads is not to gauge response but to push NOM's phony talking points into the minds of Minnesotans.

Anti-Gay Justice To Georgia: ‘You Can’t Discriminate’ Against A Transgender Person - Holy smokes! You have to read this one.

Posted by BlackTsunami at 9:03 AM 2 comments: 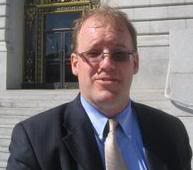 Yesterday was World AIDS Day and while there were much necessary information put out there, there was also some unnecessary nonsense.

And following that obsession, LaBarbera is into demonizing gays and throwing out his idea of what exactly gay sex is rather than solving the problem. Let's break down the fallacies of his points:

Problem - LaBarbera distorts Foreman's call for gays to do more to stop AIDS. What Foreman said is no different than what Phil Wilson, executive director of the Black AIDS Institute, wrote in this brilliant piece, part of which reads:

There are many reasons why we are so disproportionately impacted by AIDS. But, chief among them is that we've not taken ownership of the AIDS epidemic and responsibility for ending it. Many of us continue to believe that AIDS is someone else's problem. Even as our brothers and sisters, sons and daughters, get infected with HIV, develop AIDS and die.

I get the sister from the Black Philanthropy conference's concern about stigma and image. But we can't be more concerned about 'our image' than we are about our lives. Having a raging epidemic run through our community unchecked is actually the last thing we need.

Or when Julian Bond said the following:


It is time for the African-American community "to face the fact that AIDS has become a black disease" and find ways to defeat it, the chairman of the NAACP said at the international AIDS summit.

This speaks to another point. LaBarbera cites a CDC fact sheet on AIDS which shows that new infections are higher among young black men than they are among younger white men.


Stop pretending that all lifestyles are at equal risk for AIDS – because HIV is NOT behaviorally- or lifestyle-neutral. Instead, teach students in school health classes the DOCUMENTED REALITY that certain behaviors, especially male homosexual sex, are especially high-risk for contracting HIV (and other STDs like hepatitis).

LaBarbera conveniently omits the reasons why people are at risk. The CDC flyer which LaBarbera cites above also says that lack of proper information and social discrimination leads some MSMs (men having sex with men) into high risk behaviors. LaBarbera seems to be saying "stop gays from having sex" when the problem is a bit more complex than that.

Read more »
Posted by BlackTsunami at 5:15 AM 3 comments: