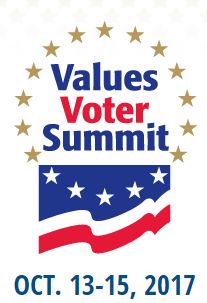 Don't let them fool you with their false piety and flowery language about protecting faith, God, and country.

The Family Research Council's upcoming weekend event, Values Voter Summit, will be nothing more than a bunch of self-righteous, hateful folks giving both Christianity and conservatism bad names as they gather to lick the boots of a madman and plan what mayhem they will cause for those of us who don't fit their definition of purity.

Kinda like a Nazi rally without the ugly battleship grey uniforms.

Trump will be giving the keynote address Friday night, no doubt leaving the crowd drooling over what they can get away with his Administration. And, according to Right Wing Watch, the following are a few of the other attendees (aside from the usual cast of vile characters - Tony Perkins, James Dobson, Todd Starnes, Michelle Malkin, etc):

Moore is likely to get a hero’s welcome in spite of revelations this week that he took more than $1 million from the nonprofit he founded, the Foundation for Moral Law, between 2007 and 2012, which the Washington Post reported “far surpassed what the group disclosed in its public tax filings most of those years.” On top of that, Moore’s political career has been funded in part by Michael Peroutka, who has been active in Christian Reconstructionist and neo-Confederate groups and promotes the idea that a certain interpretation of biblical law should trump civil laws. Moore has repeatedly put his own religious beliefs above the law. He is intensely hostile to legal equality for LGBT Americans, arguing that homosexual relationships should be criminalized. And his avowed devotion to religious liberty seemingly extends only to those who share his faith.

Read more »
Posted by BlackTsunami at 5:41 PM No comments:

Attorney General openly defends anti-gay discrimination - It's all about JESUS! The folks who push this nonsense are clearly hiding their motives. It's not about baking a cake or arranging flowers. It's about what it has always been about - oppression. They simply change the lie. They used to say "gays are trying to corrupt children." They shifted that argument to attack the transgender community and now are saying "LGBTQ equality will deprive Christians of their rights." Know the pattern and types of lies and tell everyone. Unfortunately we can't seem to do that because folks are paying too much attention to the trees instead of noticing the forest. It's not about a cake so stop talking about cakes. Stop defending these bakers, florists, etc.

A hate group's anti-LGBTQ law just went into effect in Mississippi. Here's what you need to know. - Other than it's crap, there is plenty that needs to be known.

Caitlyn Jenner calls Trump administration the “worst ever” for LGBT+ rights - Girlfriend, what took you so long?

White Evangelicals Are Why America Can’t Have Nice Things - Rather harsh tone but rings true. This was posted in June but it's remains relevant.


Posted by BlackTsunami at 9:20 AM No comments: