#BoycottTarget hashtag is a place of complete transphobic lunacy

As much as I hate to jump in the middle of wonderful mood given by Attorney General Loretta Lynch's wonderful speech detailing the lawsuit against NC, I should remind folks who we are fighting.

If the Justice Department has any problem proving animus regarding NC's anti-lgbt HB2, I would recommend they go over to twitter and check out the #BoycottTarget hastag.

This hashtag, started by the anti-lgbt hate group American Family Association in response to Target's trans-inclusive policy (and the petition which is a part of the campaign) have been pretty successful. However, it only demonstrates how many ignorant and hateful folks there are in the twitterverse with too much time on their hands.

AFA will have you believe that it and its supporters of the #BoycottTarget movement are decent, Christian folk who are merely concerned with the safety of women and children. They will have you to believe that there is neither hate nor malice in their hearts.

Some of these folks have a warped idea of decency. I grabbed just a few of the many tweet to demonstrate what I mean. Before you read any of these, I should caution that you are entering rough territory. I specifically took pics of these tweets just in case the parties involved chose to block me in the future. Also, I took the liberty to blot out the names of some of these folks. The point of this post is not to encourage anyone to contact these folks, but to demonstrate just how sadly gullible they are and how vile the American Family Association is for deliberately "rattling their cages" with lies about the transgender community. 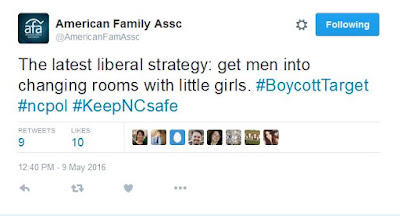 The next series are various attacks on lgbts, President Obama, Attorney General Lynch, and even the First Lady. It's not pretty: 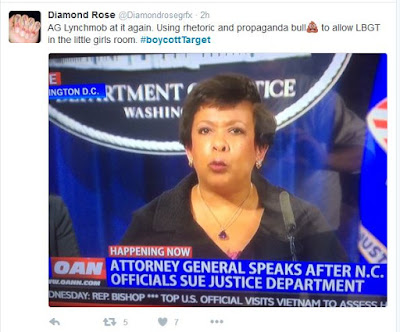 Read more »
Posted by BlackTsunami at 9:40 PM No comments:


I'm in agreement with many of my lgbt brothers and sisters right now. There are no words good enough to express what we have just heard from US Attorney General Loretta Lynch. She just announced that the Justice Department will be suing North Carolina over its anti-lgbt law.

But her speech announcing the lawsuit will be remembered as one of the greatest, most legendary speeches in not only lgbt history but United States history. I highlighted a part I felt was the most pivotal (when she spoke to the transgender community.):

Good afternoon and thank you all for being here.  Today, I’m joined by [Vanita] Gupta, head of the Civil Rights Division at the Department of Justice.  We are here to announce a significant law enforcement action regarding North Carolina’s Public Facilities Privacy & Security Act, also known as House Bill 2.

The North Carolina General Assembly passed House Bill 2 in special session on March 23 of this year.  The bill sought to strike down an anti-discrimination provision in a recently-passed Charlotte, North Carolina, ordinance, as well as to require transgender people in public agencies to use the bathrooms consistent with their sex as noted at birth, rather than the bathrooms that fit their gender identity.  The bill was signed into law that same day.  In so doing, the legislature and the governor placed North Carolina in direct opposition to federal laws prohibiting discrimination on the basis of sex and gender identity.  More to the point, they created state-sponsored discrimination against transgender individuals, who simply seek to engage in the most private of functions in a place of safety and security – a right taken for granted by most of us.
Last week, our Civil Rights Division notified state officials that House Bill 2 violates federal civil rights laws.  We asked that they certify by the end of the day today that they would not comply with or implement House Bill 2’s restriction on restroom access.  An extension was requested by North Carolina and was under active consideration.  But instead of replying to our offer or providing a certification, this morning, the state of North Carolina and its governor chose to respond by suing the Department of Justice.  As a result of their decisions, we are now moving forward. 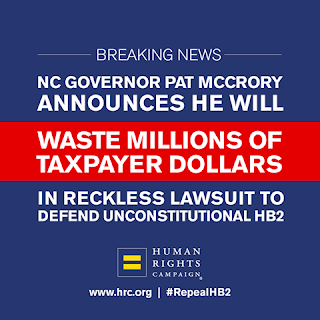 North Carolina Sues Justice Dept. Over Challenge To Bathroom Law - With all of the "crotch-grabbing" machismo and bluster that GOP official threw at the Justice Department, I'm not surprised over this next step. If McCrory and company wants to do this the hard way, then I'm all for it. They gonna learn.

Gay couple files lawsuit against Miss. religious freedom law - Meanwhile, WE can do some suing of our own.

Now Trump Is Just Openly Attacking The Religious Right - This does NOT mean that I am defending the religious right. I'm merely drawing attention to a stupid man who has no control and will lash out like a baby. But he is the presumptive GOP nominee.

Here We Go Again: Roy Moore Suspended For Defying Gay Marriage Rulings - And if he loses his gig - like the last time - the voters will probably put him back in again so he can act like a fool again. Then the process will repeat itself. Works for me. I love merry-go-rounds until folks pushing the buttons get tired.

Mat Staver: Transgender Nondiscrimination Laws Are 'Being Financed By Those Who Are Actively Promoting Pedophilia' - Oh please, please, please let this turkey and his silly organization be the ones defending HB2 in court!!

Posted by BlackTsunami at 9:07 AM 2 comments: