On the day that Donald Trump has been accused of rape

The moment the dressing-room door is closed, he lunges at me, pushes me against the wall, hitting my head quite badly, and puts his mouth against my lips. I am so shocked I shove him back and start laughing again. He seizes both my arms and pushes me up against the wall a second time, and, as I become aware of how large he is, he holds me against the wall with his shoulder and jams his hand under my coat dress and pulls down my tights. I am astonished by what I’m about to write: I keep laughing. The next moment, still wearing correct business attire, shirt, tie, suit jacket, overcoat, he opens the overcoat, unzips his pants, and, forcing his fingers around my private area, thrusts his penis halfway — or completely, I’m not certain — inside me.

Questions are being asked about outside influence on Donald Trump after the US president called off air strikes against Iran at the last minute. Having initially said he believed Iran made an error when it shot down a US drone on Thursday in the Strait of Hormuz, the president nonetheless reportedly approved military strikes against the Islamic Republic later that day. The operation to hit targets such as radars and missile batteries was in its initial stages, the New York Times reported, and planes were in the air and ships had been moved into position. But before any missiles were fired the operation was cancelled.


and articles are released relating that immigrant children are becoming ill in border camps with  no decent food, water or sanitation:

1. Four toddlers were so severely ill and neglected at a U.S. Border Patrol facility in McAllen, Texas, that lawyers forced the government to hospitalize them last week. The children, all under age 3 with teenage mothers or guardians, were feverish, coughing, vomiting and had diarrhea, immigration attorneys told HuffPost on Friday. Some of the toddlers and infants were refusing to eat or drink. One 2-year-old’s eyes were rolled back in her head, and she was “completely unresponsive” and limp, according to Toby Gialluca, a Florida-based attorney.

2. A 2-year-old boy locked in detention wants to be held all the time. A few girls, ages 10 to 15, say they’ve been doing their best to feed and soothe the clingy toddler who was handed to them by a guard days ago. Lawyers warn that kids are taking care of kids, and there’s inadequate food, water and sanitation for the 250 infants, children and teens at the Border Patrol station.

the so-called Christian group the Family Research Council has decided to gloat about Trump keeping transgender men and women out of the military:


We have seen many victories in the last few years for #religiousfreedom in the #military, including the Trump admin. reversing the Obama era-social experimentation policy of allowing individuals to serve who openly identify as transgender. Thank you: https://t.co/IyiW3FIPok pic.twitter.com/xrrdT2mKRg
— FRC (@FRCdc) June 21, 2019 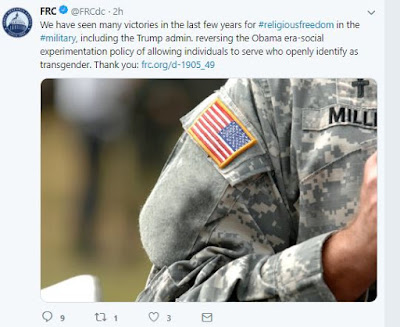 Posted by BlackTsunami at 6:13 PM No comments:


A college found this Lady Gaga quote so dangerous the library had to take it down - Too late! The kiddies are already ours MUHAHAHAHAHAHA!

Lawmakers form group to fight anti-LGBTI discrimination around the world - Lawmakers from two dozen countries, that is. It is sorely needed.

LGBTQ Media Matters staff speak about representation in the media - I've admired members of this group for a long time. It's nice to see them in real form. Good video!

Thousands of teens spared conversion therapy due to state bans, report finds - Something to cheer about.
Posted by BlackTsunami at 8:36 AM No comments: