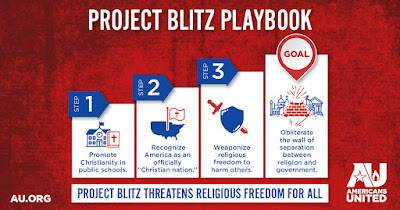 State legislatures are filled with anti-LGBTQ measures, thanks to a religious right playbook - FINALLY, some recognizes it and calls it out.

Project Blitz Is Producing Model Legislation For Christian Nationalists - The name of the group in the article above is Project Blitz and they have something especially nasty in store for us. It's an old anti-LGBTQ lie that we buried in our pursuits of marriage equality. But homophobic lies never die. That's why they are headless monsters. They are dead beliefs propped up by living hatred.

Who's the 'Q' in LGBTQ? Study shines light on 'queer' identities. - Definitely a needed discussion.


Graphic courtesy of Americans United for the Separation of Church and State. The organization has extensive information on Project Blitz
Posted by BlackTsunami at 9:26 PM No comments:

How some gay conservatives attempt to exploit the LGBTQ community for personal gain.

The guy on the right is Rob Smith. He was one of the activists who chained themselves to the White House fence almost 10 years ago in protest of the 'Don't Ask Don't Tell' policy. These days, he considers himself an openly gay conservative Trump supporter.  He is even affiliated with the group Turning Point USA  in spite of its racist history.

If you ask me, he's in it partly (probably mostly) for how the novelty of being a contrarian gay man (i.e. one who is openly gay and claims to have been once a liberal, but now sets up straw man arguments to attack the community) can reap lots of press and acclaim.  Just ask Brandon Straka or Chadwick Moore.

For the purpose of this post, I want to show how some gay conservatives attempt to work our community for their own benefit. See the tweet below by Smith:

It's both rude and seemingly innocuous, but let me add my perspective: 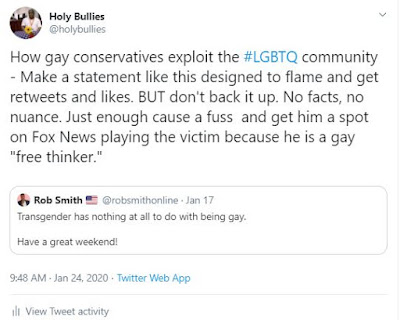 In other words, the purpose of  the tweet was to inflame emotions and push up a vicious war with the LGBTQ community. And if it's big enough, guess who gets articles in right-wing publications (such as The Federalist or The Daily Caller) and invites on Fox News (because the only LGBTQ people invited on that network are the ones who attack their own community)?

And the end is basically this - Smith's profile is raised in the conservative world and he is lauded as being "brave" and a "hero" for supposedly speaking against the "radical gay community" (that's us). He is anointed as a "free thinker" while we are portrayed as "intolerant of others in our community with different points of view."

Worst of all, some members of our community, who are either too egotistical or gullible to realize  how they are being manipulated, will take his side and attempt to generate a wrong-minded debate which will do nothing but divide and inflame us further while making Smith's profile grow and grow.

And that, brothers and sisters, is how the game is played on us. Our community may have differences, but we should all come together to recognize when someone is exploiting us to gain fame. Even if that person is "family."
Posted by BlackTsunami at 2:34 PM 3 comments: