By now, I don't think I have to rehash the situation involving Trump's false claim that Obama had him wiretapped last year. Yesterday, FBI Director James Comey became the latest government official to refute it.

However, don't tell that to the anti-lgbt hate group American Family Association or its fake news site, One News Now. You would ruin the organization's attempt to provide credibility to Trump's continuously refuted claim via an article on its site, A quest to stump Trump, not dig for truth.

The article says that disputing Trump's claim is a part of a conspiracy to harm his presidency (as if he needs the help). The pièce de résistance of this hot mess is the One News Now poll below: 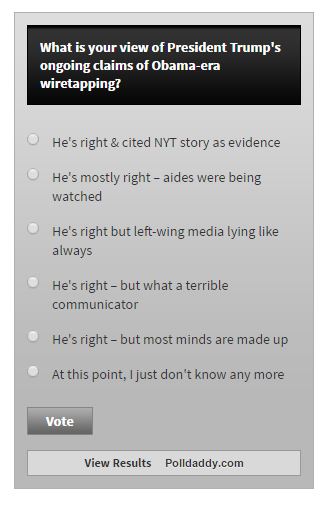 One would think that a group which prides itself on morality wouldn't be so quick to defend the lies of a man who doesn't seem to know the meaning of the word "honesty." Perhaps the American Family Association has decided that until Trump gives up that "religious liberty" executive order, the group will kiss his butt and then brag about how it tastes like what was served during The Last Supper.
Posted by BlackTsunami at 5:27 PM No comments:

'How Trump transformed the religious right into lapdogs of the alt-right' & other Tue. midday news briefs

The Dangers Facing Trans Women Of Color In 2017 - Siiiigh!

Why Neil Gorsuch’s Idea of ‘Religious Liberty’ Is A Direct Threat to LGBTQ Rights - Pay attention. Signorile breaks it down again.