Someone needs to seriously ask the Family Research Council what the hell does it mean by this: 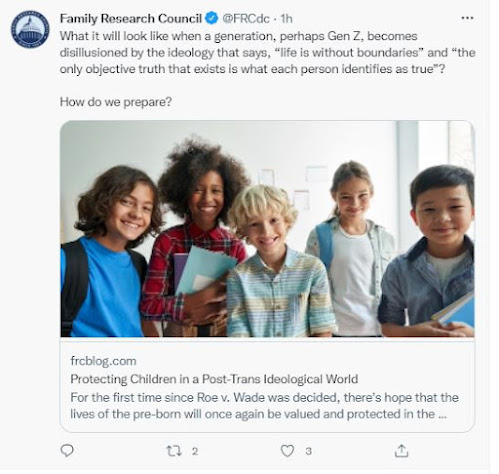 For those who are interested, FRC is riding its optimism about a possible SCOTUS overturn of Roe v Wade to the transgender community. The organization has been going on and on about a 'post Roe v Wade' society after the SCOTUS ruling.

We don't know yet if this will be a reality. But we should be alarmed not only about FRC's desire to declare an end to Roe v Wade, and also about the group's desire to talk about a 'post trans ideological world.'  Don't be fooled by what FRC is claiming. Being trans is not an ideology. It is a reality. And it's a reality in which FRC and groups like it are working to undermine as evidenced by this passage coming from the above article:

Right now, the medical and psychological professions do not have answers to the gender identity confusion. In many U.S. states, these professionals are not even allowed to talk about root causes of confusion over biological sex. These professionals (I’m affiliated, too) may only offer affirmation. But as some who have detransitioned have reported, a time can come when the novelty of the transgender procedures wears off and the tide of applause from trans-affirming activists rolls back. After a person’s foundation has been laid bare, what remains is pain, unresolved identity struggles, and the confusion that initiated the desire to be someone else.
When this ideology and supposed treatment collapses, we must be prepared! Because, ready or not, they are coming, and the need will be great. Many in the trans-identifying community will realize that they were sold a lie about their identity by some of their closest family members, friends, and authority and political figures. The sense of betrayal and grief, as we have already seen with the first fruits of those who have detransitioned, will be profound. This means the church and those who remain clear and fair-minded need to be ready to receive them with open arms.
First, we can’t lose hope! Just last week, one pro-transgender group noted that 200 bills had been introduced in 2021 to prevent access to gender-affirming “health care” and aimed at mitigating the problems that arise with social spaces and biological males competing in women’s sports. This all points to a willingness of parents and concerned citizens to lobby their politicians to stand for truth and protect children.
Second, we need to learn about the needs of this population and ways we can serve them. The trans ideology has been advertised as a pathway to becoming your “true self” and a grand solution for mental distress. The reality is that many of those who identify with trans-ideology have childhood traumas in their backgrounds. Some may have a diagnosis of autism or were deeply influenced by their peers and social media. This ideology is no substitute for some of these root issues. When they come for help, they don’t necessarily just need someone with a degree in psychology. They will need someone who can listen, empathize with their pain, and show mercy that is tethered to truth.

First of all, let's be clear. Parents are not lobbying for these awful bills. In actuality, parents have been scared and vocal about how these bills are affecting their families and particularly their children. And the 'concerned citizens' FRC spoke of are members of anti-LGBTQ groups - the same groups who crafted these bills and are handing them off to lawmakers.
FRC claims that undermining transgender healthcare and rights in general will lead people to stop being trans. That's not true and FRC knows it. What the group is hoping is that its undermining of trans rights and healthcare will put more trans people in unhealthy situations in which they are more depressed, more suicidal and more susceptible to other negative behaviors. Then it and other right-wing groups will swoop in and declare being trans as an 'unhealthy ideology' which leads to unhappiness and death, when in actuality it's their actions which are leading to the misery.
If you recognize the modus operandi, it's because it has been the same playbook FRC and other conservatives have used against the queer community in general - undermine our rights and visibility to position us in mentally, physically, and emotionally negative states and then try to make us believe that our supposed lifestyles are the problems instead of their hatred.
It's the same game plan, right down to the over emphasis on detransitioning. In my day it was called 'ex-gay' therapy.
Posted by BlackTsunami at 4:17 PM 1 comment:

WATCH: Russia’s new reality show takes homophobia to a weird new level - Y'all ain't gonna believe THIS mess . . .
17 LGBTQ+ Films and TV Shows to Watch in May​ - Get excited.
Most Americans don't support politicians punishing firms for their views, Reuters/Ipsos poll finds - The question is would Americans punish these politicians at the polls.
Megyn Kelly claims “crazy trans activists” are trying to convert gay men into women - Megyn Kelly is a racist who is always full of sh!t. End of story.
Justice Department challenges Alabama law criminalizing transgender health care for minors - Meanwhile, more proof that elections matter. The Trump Administration would have never challenged this awful law.
Posted by BlackTsunami at 9:42 AM No comments: