Rep. Louie Gohmert fails to debunk homosexuality, does prove that God has a weird sense of humor

Both the saddest and scariest thing about the following comment made by Rep. Louis Gohmert R-Texas (to a group of young conservatives. Pray for them even if you're an atheist.) is not that he actually thinks it makes sense. It's that he is a practically an unbeatable elected official in a conservative territory and his party is the majority in the House. This means that if he isn't already, he could be head of a committee which the very livelihood of Americans could depend on.

When you ignore some homophobes, they don't go away. They just get elected to public office, proving that maybe God has a weird sense of humor.


I don't think I can add anything to that except wouldn't it be scary to contemplate that Gohmert could live 100 to 200 years?
Posted by BlackTsunami at 2:57 PM 2 comments: 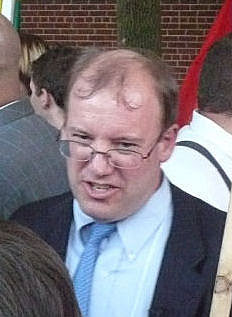 'They Want To Let Sodomites Queer Our Country': How Christian GOP Activists Lobbied TX AG On SCOTUS - When folks say we should ignore anti-gay groups and personalities, I will now point out THIS reason why we shouldn't. No matter how disgustingly crazy they may seem, when they have the ear of any government official, we got trouble.

Judge Throws Out Key Argument In Transgender Student Restroom Case - Read the ENTIRE article. This is the very definition of an "activist judge" the religious right likes to criticize. But they won't be criticizing HIM anytime soon.

The Same-Sex Couple Turned Away By Sweet Cakes By Melissa Speak Out - Yes! We need to read the couple's side. The anti-gay right truly monopolized this controversy.

Baptist Pastor Sends An Open Letter To The LGBT Community - It's not a nice letter. Feel free to laugh.

Far-Right Pastor: Christians 'Should've Stormed The Capitol' To Protest Gay Marriage - Oh please. The 'Christians' he refers to are more secure with sitting in comfortable pews in air conditioned churches while wringing their hands in sadness about how "persecuted" they are.
Posted by BlackTsunami at 9:17 AM No comments: