Generally when I showcase anti-gay figures and their comments, I always provide some expository. However,  the following comment by marriage equality opponent Alabama Chief Justice Roy Moore is so mind-blowingly stupid that it can stand on its own.when it comes to illustrating the basic ignorance of many of those who oppose marriage equality and lgbt equality in general: 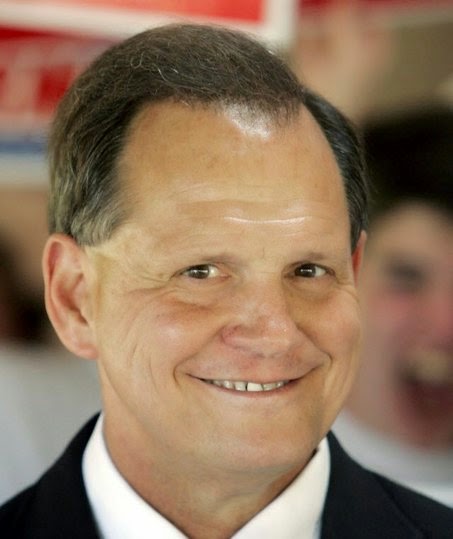 "You're taking any definition of a family away. When two bisexuals or two transgendered marry, how large is that family? Can they marry two persons, one of the same sex and one of the opposite sex? Then, you've got a family of four or how many?" - Alabama Chief Justice Roy Moore

Hat tip to the Associated Press by way of Right Wing Watch.
Posted by BlackTsunami at 2:55 PM 2 comments:

Has the Anti-Gay Right Found Its Gay 'Partial Birth Abortion'? - This excellent piece by Michelangelo Signorile inspired today's morning post. He makes the point while the lgbt community is taking it for granted that we may receive nationwide marriage equality, anti-gay groups are meticulously planning to create a long-term war of attrition via "religious liberty" bills. Our community simply has to stop taking these anti-groups lightly and get on the offensive rather than the defensive. If we get caught "napping" this time, we have no one to blame but ourselves.


Man Who Once Defended Georgia Sodomy Ban To Oppose Religious Liberty Bills - And this is one way to be on the offensive - not waiting to be attacked but gathering our allies together and planning the fights.

Ten controversies caused by Todd Starnes and his sloppy, homophobic journalism - One of the times I am including my morning post in the news briefs because I feel it NEEDS to be read and shared on a larger scale.

Jeb Bush to name openly gay man as Communications Director - Well! This is going to make the 2016 election very interesting.

Scott Lively Warns That SCOTUS Could Unleash The Antichrist By September 2015 - Come on folks, you know I had to throw at least a little "crazy" in today's news briefs. If you want to see a strangely cool, but nauseating graphic which illustrates Lively's point, go here to Jeremy Hooper's site.
Posted by BlackTsunami at 9:05 AM 1 comment:

Faced with the reality that they may actually lose the fight against marriage equality, anti-gay groups, as they are skilled at doing, are switching tactics to fight gay equality.

After decades of claiming that homosexuality is a public health menace which encompasses pedophilia, disease, and all-around negative behavior, they are suddenly shifting the conversation to the idea that Christians and evangelicals like themselves are now seeing their rights infringed upon by a world which is becoming more lgbt-inclusive.

Instead of relying on information such as FBI statistics, because such statistics contradict their claims, anti-gay groups are relying on anecdotes and FOAF (friend of a friend) stories which are for the most part are conjured up by either themselves or members of the media friendly to their point of view.

Since starting with Fox News a few years back, Starnes, a conservative author, commentator, and author,  has made a name for himself by supposedly uncovering evidence of anti-Christian bias in various places. Subsequently, his articles and columns not only attract a large following but are also used by anti-gay organizations such as the Family Research Council, the American Family Association, and other various groups who claim that the goal of lgbt equality is to suppress Christianity.

According to the site Equality Matters, Starnes serves as a willing mouthpiece to these groups; i.e. their conduit to the mainstream press when it comes to pushing their anecdotes of anti-Christian bias.

Starnes himself has made viciously untrue comments about lgbts such as:

LGBT equality is ushering in 'cultural cleansing, and

LGBT equality will lead to bestiality

Starnes also has a reputation as a sloppy reporter whose personal biases causes him to either embellish or omit details in his articles and columns; details which contradict his overriding claim of anti-Christian persecution.

And this wouldn't be the first time he has gotten into trouble for sloppy journalism. In 2003, Starnes was fired by the Baptist Press for what seemed to be a deliberate misrepresentation of quotes by then U.S. Education Secretary Rod Paige. Apparently, what Starnes did was so bad that before the truth was discovered, several civil rights groups and members of Congress  were demanding Paige's resignation.

Since that time, Starnes has been the stirring stick of several controversies which go beyond the Paige controversy.

Below is a short summary of  a few of  the controversies Starnes  has created. Accompanying these controversies are the facts which he either omitted or didn't investigate further to discover. Not all of these controversies involve claims of gays supposedly persecuting Christians, but they all weave the false theme of anti-Christian bias. And we all know that when there are false themes of anti-Christian bias, sooner or later, these themes filter down to fingers being pointed at the lgbt community.

1. Starnes spin - The United States Military was deliberately blocking access to the official website of the Southern Baptist Convention because of anti-Christian bias.

Truth - The website was blocked because of virus issues. This was confirmed by the Baptist Press, the news source of the Southern Baptist Convention.


2. Starnes spin - The United States Military will begin court marshaling Christians in an effort to kick them out of the service

Truth  - "As Warren Throckmorton points out, the Defense Department guidelines on proselytizing and religious bias that has so enraged Starnes and others was actually put in place in 2008 during the Bush administration and the language clearly “draws a distinction between simply speaking about one’s faith and coercion.”

"Throckmorton also notes that Starnes twisted a statement from a Pentagon spokesman “to make it seem as though the outcome of religious proselytizing cases would be court martial.” '

Starnes spin - A San Antonio non-discrimination ordinance will bar all Christians from serving in public office, discriminate against folks for having prior anti-gay beliefs, and will "force churches to allow transgender bathrooms."

Truth - Equality Matters refuted every one of those claims. The site called the last claim regarding churches a boldfaced lie.

Truth - This was probably the most significant debunking given to Starnes because it was by a fellow Christian, Alan Noble. In an absolutely blistering piece entitled Todd Starnes Sold Us a War on Christianity. We Bought It, Noble outright accuses Starnes of lying:

Last week, Todd Starnes at FOX News published two articles on anti-Christian discrimination at Veterans Administrations hospitals this Christmas season. In both reports, Starnes lies and tactfully omits facts in order to deceive his audience, creating the impression that the government is at war with Christmas. . . .

. . . Starnes’s wide influence on evangelicals is alarming because he consistently deceives and manipulates facts in order to exaggerate or fabricate incidences of Christian persecution. These reports influence a great deal of people who often respond with hatred, anger, and disgust out of ignorance.

Starnes spin - A first grader was prohibited by her teacher from talking about how her family puts the Star of Bethlehem on top of their Christmas tree. Her teacher then told her to stop talking about the Bible in class

Truth - The school and the teacher involved published a public statement denying the incident.  The student was taking too long in her presentation. The teacher helped her through it but then cut it short because there were other students who had to do their presentations. At no time did the teacher tell the student to stop talking about the Bible in class or that no one is allowed to discuss the Bible in class.

1. Starnes spin - As part of a lgbt-inclusive anti-bullying workshop at Linden Avenue Middle School in New York, two female students were forced to kiss each other.and male students were told to carry condoms in their pockets


2. Starnes spin - A kindergarten student in Florida was told that she could not pray before eating her lunch.

Truth - The school investigated and could find no evidence that the incident took place. An interesting addendum to this controversy was that the child in question was the daughter of Marco Perez. Perez is the vice president of sales of a Christian publishing house (Charisma House) which published Starnes's recent book on - what else - anti-Christian persecution.

From Right Wing Watch , the Orlando Sentinel, and Equality Matters

Starnes spin - An church in Coeur d'Alene, Idaho was being forced to marry a gay couple.

Truth - The "church" in question, The Hitching Post, was not a church but a "for-profit" business which also offered secular weddings. In fact, city never even took legal action against it.

1. Starnes spin - An Oregon bakery which refused to bake a cake for a same-sex couple could face a fine of up to $200,000

Truth - “Todd Starnes is writing that the bakery owners face fines of up to $200,000 in damages. That’s false,” said Charlie Burr, (Oregon Bureau of Labor and Industries) communications director. “In fact, it’s the Kleins who have asked for $200,000 in damages from our agency for our enforcement of the Equality Act.”


2. Starnes spin - Students at Acalanes High School in Lafayette, California were bullied during a class presentation put on by the school's Queer/Straight Alliance.

It is not clear what other primary source Fox News used for their reporting, but their "opinion" piece on the program does not reflect what actually took place.

At a time in which journalistic honesty is being scrutinized because of controversies involving NBC's Brian Williams and Starnes's colleague at Fox News, Bill O'Reilly,  it is amazing that Starnes has gotten away with so many incidents of sloppy journalism and deliberate embellishment of facts

Starnes doesn't care about being truthful because he is too busy presenting an argument. Such a mindset is a dangerous one for a journalist to have. He seems to be determined to prove that there exists an anti-Christian bias in this country (particularly coming from the lgbt community) whether or not such a bias exists.

And it is something for the lgbt community to remember  and remind people of because if we should eventually win marriage equality in all 50 states, Starnes's articles and columns, no matter how sloppy and embellished, will play a huge part in the religious right's argument of anti-Christian suppression.
Posted by BlackTsunami at 4:58 AM 1 comment: