FRC's Tony Perkins will not address the errors in his anti-gay piece, but he will play the victim 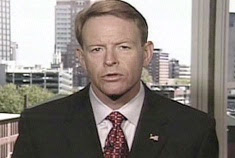 The Family Research Council's Tony Perkins received a lot of criticism for a piece he wrote last week on National Coming Out Day.

In the piece, Perkins complained that "homosexual activists" were "exploiting" the recent suicides of lgbt teens. He tried to make the case that homophobia didn't lead to these suicides but that homosexuality itself was a "dangerous lifestyle:"

There is an abundance of evidence that homosexuals experience higher rates of mental health problems in general, including depression. However, there is no empirical evidence to link this with society's general disapproval of homosexual conduct. In fact, evidence from the Netherlands would seem to suggest the opposite, because even in that most "gay-friendly" country on earth, research has shown homosexuals to have much higher mental health problems.

In several places, including the comments section below his piece, Perkins got skewered. A main point of those criticizing Perkins was the fact that he distorted several studies to make the case that homosexuality was a "dangerous lifestyle."

Media Matters for America called him out:


Perkins suggests that these tragedies are not caused by the homophobic attacks these individuals were subjected to, but rather because "homosexuals experience higher rates of mental health problems in general, including depression," and, according to Perkins, there's no "evidence to link this with society's general disapproval of homosexual conduct." Unfortunately for Perkins, the article he links to says no such thing.

Perkins links to a February 2002 American Psychologist article, which reported on the "results of several breakthrough studies are offering new insights on gay men, lesbians and bisexuals." While Perkins is right, "Several studies suggest that gay men, lesbians and bisexuals appear to have higher rates of some mental disorders compared with heterosexuals," he's totally wrong that these rates have nothing to do with discrimination. In fact, the article immediately goes on to report that "[d]iscrimination may help fuel these higher rates." The article reported: "In a study that examines possible root causes of mental disorders in LGB people, [Susan] Cochran [PhD] and psychologist Vickie M. Mays, PhD, of the University of California, Los Angeles, explored whether ongoing discrimination fuels anxiety, depression and other stress-related mental health problems among LGB people. The authors found strong evidence of a relationship between the two." Several other studies back up this finding.

Jim Burroway of Box Turtle Bulletin pointed out this error in Perkins's piece regarding his "evidence" from the Netherlands:

While the study’s authors notes that the Netherlands is generally more tolerant, it doesn’t mean that LGBT people there are free from anti-gay bias and stress. After all, “more tolerant” is not the same as tolerant. And as for the study’s findings, the authors offered this explanation:

And John Aravosis on Americablog pointed out how Perkins and his group, the Family Research Council, promotes the work of the discredited Paul Cameron.

On Tuesday, Perkins answered back at his critics and did he clear up the points made about the errors in his piece?

He directed all of his attention to attacking GLAAD (the Gay and Lesbian Alliance Against Defamation) for their complaints about his piece:


In the last two weeks, FRC has had a front row seat to the effort by homosexual activists to intimidate the media into silencing conservatives. When the Washington Post published my op-ed last week about the need for an open discussion about the negative consequences of homosexuality (so that these people might have the freedom to leave the lifestyle), the Gay and Lesbian Alliance Against Defamation (GLAAD) threw a (predictable) fit. They accused the Post of giving me a platform for "anti-gay bullying" and urged readers to flood the paper with complaints. Now there are plenty of problems with this scenario-not the least of which is GLAAD's definition of bullying. Despite how threatened they are by the truth, there is nothing more compassionate than trying to rescue people from a lifestyle that is physically and emotionally destructive. GLAAD doesn't see it that way. Just as they did with Matthew Shepard, they're exploiting Tyler Clementi's tragic death as a weapon to scare Christians into retreating--or, in this case, as a way to pressure the media to muzzle any opposition.

But Perkins chose not to address these. Instead, he chose to claim that he and his organization are victims of homosexual activists trying to silence Christians.

I didn't know pointing out someone's errors is the same as silencing them. Maybe it is in the case of Perkins and FRC.

If they couldn't lie about the lgbt community, maybe they wouldn't have anything else to say.

Posted by BlackTsunami at 3:36 PM No comments: Links to this post

Video: Wherein a tongue-tied Bob Vander Plaats gets smacked down. Hard - I love it when someone pushing distortions gets schooled.

Bless Those Who Persecute You: The Just Response to Gay Bullying - A piece on the Huffington Post by a very good friend of mine, Rev. Candace Chellew-Hodge

Peter LaBarbera Unclear on Meaning of Word ‘Blackmail’ - I'm not going to say a word about Petey. It's just too easy. 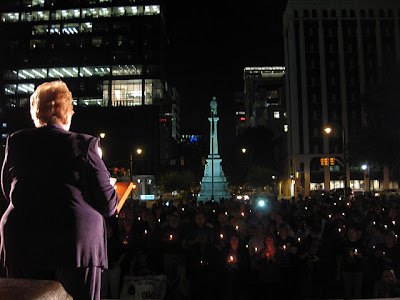 Hundreds of candles burned Wednesday night in memory of five bullied youth, all either gay or questioning their sexuality, who in recent weeks have taken their own lives.

“Seeing the teens on the news who committed suicide, it hurts deep down inside because I was there just a few years ago,” says Justin Wise.

Wise, 22, says he was harassed throughout grade school, but now he's taking a stand.

Wise was one of the speakers at the candlelight vigil held outside the front steps of the state house, which focused on the message “it gets better.”

“We are out here to show those kids we are here, and you have a support system,” says SC Pride member Jennifer Tague.

Many of the attendees were wearing purple, because the color on the LGBT flag represents spirit.

“When you put a face out there and you talk about an incident people react,” says Elke Kennedy, whose son died in 2007 from a hate crime.

Click on the Fox News link for the video which unfortunately does not embed. The picture above is Founder of SC Pride, PFLAG Columbia, and the Harriet Hancock LGBT Community Center, Harriet Hancock addressing the audience at the vigil.

Posted by BlackTsunami at 5:14 AM No comments: Links to this post