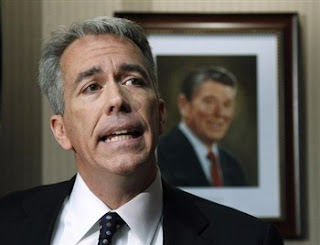 By now, we all know the last mess coming from the Family Research Council - how the organization awarded Congressman Joe Walsh an award for supposedly fighting for "family values" even though Walsh owes over $100,000 in child support.

Of course the ugly irony is that earlier this week, FRC publicly prayed that God would keep gays from adopting children. So apparently being gay father or a lesbian mother is a bad thing, but not paying your child support is a virtue.

But what gets me is Walsh's response in receiving the award:

“I am proud and honored to be recognized by the Family Research Council as the only member from Illinois with a 100 percent pro-family voting record,” he said in a press release. “Defending American values have always been one of my top priorities, and this reward reaffirms my dedication to that fight.”

Yes, I know. Apparently paying for your children's care isn't an American value in Walsh's book. Now allow me to tell you what will probably happen next.

The Family Research Council will either ignore this incredible faux pas on its part or respond much later after formulating some type of battle plan to explain away what it did.

Count on this battle plan to include one-sided articles in phony "pro-family" publications such as the American Family Association's One News Now and appearances on "friendly" areas such as Fox News.

But above all, this battle plan will not include anything remotely looking like an apology or any type of acknowledgement that the organization goofed.

After all, the Family Research Council works for Jesus. And those who work for Jesus never makes goofs.

Know Your LGBT History - The Best Way To Walk

The Best Way to Walk (1976) or La Meilleure Façon de Marcher, as it is known in France is a motion picture which is screaming for an American remake.

It's a complex story about closets, intimidation, and possible secret wanting.

Patrick Bouchitey portrays a summer camp counselor who is caught one night by another counselor (my dreamboat, Patrick Dewaere) wearing make up and in drag.

Dewaere does not tell the other counselors but for some reason - which is not known to the viewer, but we can guess - decides to subtlely humiliate Bouchitey on several occasions via anti-gay jokes, intimidating actions, and even flashing himself (in a very, very open scene involving frontal male nudity) in front of Boutchitey.

Finally, at the end of the movie, Bouchitey decides to turn the tables on Dewaere during a costume ball.

While a very vanguard movie for its time, The Best Way To Walk, was also very guarded. At no time do either of the characters say that they are gay. But there is an underlying tension that is just fascinating. Dewaere - whom I was very upset to learn committed suicide decades before I discovered him - gives a performance which should be watched, memorized, and copied by any actors. Especially the full frontal scene.

Past Know Your LGBT Posts: .

Anyone who thinks that the Family Research Council is either a Christian or "pro-family" group obviously has not done their homework on the group.

The group just anointed Congressman Joe Walsh as a pro-family leader in spite of the fact that he allegedly owes over $100,000 in child support:

“Congressman Walsh and other ‘True Blue Members’ have voted to repeal Obamacare, de-fund Planned Parenthood, end government funding for abortion within the health care law, uphold the Defense of Marriage Act, and continue support for school choice. I applaud their commitment to uphold the institutions of marriage and family.”

At the same time, FRC has been saying ugly things to say about the following same-sex wedding officiated by Conan O'Brien on his show:

And the biggest irony? The praise of Walsh comes days after FRC publicly prayed that God stop gays from adopting children.

Pro-family? My tuckus! Christian? Forget about it!

Transgender, victimized and black - An issue which deserves a lot of attention.

You can't shake a marriage amendment without hitting an 'ex-gay' advocate (NC edition)- And speaking of FRC, resident junk scientist and spokesperson Peter Sprigg is attending a huge convention of the anti-gay group NARTH. That's the live bunch in which George Rekers used to be a member. I told him not to allow Rekers to lift his luggage should HE show up.

Family Research Council has a quiz for you

1. Due to religious exemptions, same-sex “marriage” would not harm the rights of parents, schools, churches, or religious ministries.

2. Science indicates that homosexuality is likely inborn and unchangeable.

3. Homosexual activists have grossly overstated the number of homosexuals in the population as being 10%, when surveys actually show it is only half that number, at about 5%!

4. Members of Congress from both parties support a pro-homosexual law that could force Christians to remove family photos from their workplace.

5. The proposed federal ENDA law would force all employers to hire transsexuals, cross-dressers, and “drag queens” and “drag kings” for any job—including customer service jobs and ones with children, such as teachers and day care workers.

Now if you really loved that quiz, you can send for a copy of the Family Research Council's ridiculously inaccurate booklet, The Top Ten Harms of Same-Sex Marriage.
Written by FRC spokesman and resident junk science specialist Peter Sprigg, this booklet containing the following errors:

1. distorts the work of Harvard professor Dr. Kyle Pruett and Judith Stacey. Both have complained on more than one occasion about how folks like Sprigg distort their work.

2. In page 10 and 11 of the pamphlet, Sprigg cites a study done by Maria Xiridou as proof that marriage will not stop alleged promiscuity amongst gay couples.

However, none of the couples in Xiridou's study were married. Her study did not look at gay marriage but was designed to "access the relative contribution of steady and casual partnerships to the incidence of HIV infection among homosexual men in Amsterdam and to determine the effect of increasing sexually risky behaviours among both types of partnerships in the era of highly active antiretroviral therapy."

For this study, Dr. Xiridou received her information from the Amsterdam Cohort Study of Human Immunodeficiency Virus (HIV) and AIDS Among Homosexual Men. To gain this information, researchers studied 1,800 gay men between the years of 1984- 2000.

Same sex marriage was legalized in the Netherlands in 2001, thus making the information irrelevant to points about gay marriage. Information for the Amsterdam Cohort Study is found here.

Furthermore, lesbians were not included in the study

3. Sprigg recounts the story of Massachusetts parent David Parker who was arrested for trespassing for not leaving his son's school after a meeting with school officials. Parker claimed that the school would not "allow him to opt his child out of discussions about homosexuality."  Supposedly the school was breaking state law that said parents have a right to opt out their child when it comes to discussions of human sexuality.

Of course Sprigg inaccurately condensed the story. The school had already assured Parker that discussions of human sexuality were not a part of his child's curriculum, but - and they checked with district policy on this - discussions about differing families was not a human sexuality issue AND  since several students in the school came from same sex households, they couldn't control these students talking amongst themselves about their families.

Sprigg also omitted the fact that the entire Parker controversy was conjured up by Parker and a Massachusetts anti-gay group Mass Resistance, i.e. Parker's goal was to be arrested in order to create  controversy.

By the way, Mass Resistance is also designated as an anti-gay hate group by the Southern Poverty Law Center.

I'm sure Sprigg and FRC are aware of these errors, but what's a few distortions when you are fighting in God's name?

Posted by BlackTsunami at 4:51 AM 4 comments: