Sunday evening, I posted an article about how anti-gay groups and personalities were claiming that over 60 "prominent scholars" had declared that the SCOTUS decision legalizing marriage equality shouldn't be followed because it was decided in the wrong fashion.

These "scholars" were mostly comprised of individuals who dedicated a lot of money, influence, and effort in stopping marriage equality from day one; a fact that many touting this development omitted.

As you can see, the "prominent scholars" distortions has swiftly moved from its original spot on the webpage of the Americans Principles Project.to the twitter and webpage of two other conservative, anti-gay groups.

The big question I have as I track this distortion is how many channels will it move through?  Will it appear as an item courtesy of Fox News personality Todd Starnes? This sort of lie is just his speed.

Or better yet,  can't you just picture Megyn Kelly coddling interviewing  FRC head Tony Perkins in which he is allowed to repeat this distortion without any push back. And let's not forget Ryan T. Anderson and his many resources at the Heritage Foundation and the Witherspoon Institute (who, coincidentally, employs someone who signed this statement.)

Let's raise the stakes a little bit more. How much attention would the truth behind this distortion garner if it were repeated by someone like Mike Huckabee or Sen. Ted Cruz?  Or read by someone like Rep. Louie Gohmert in the halls of Congress? Probably none.

The point is acknowledging what the lgbt community is up against in our fight for full equality. While we have won marriage equality, there are a lot other issues we need to take care of, i.e. ENDA, the rights of the transgender community, the safety of our lgbt children.

And it's time we take into account the entire power of those who oppose us.

They are united, numerous, and have access to many resources. We defeated them regarding marriage equality because in spite of all of that, truth was not on their side. However, it took a number of years.

Given how connected these folks are, how long will it be before we can win the other fights?

Whatever the case may be, I will continue to track just how much of a stake anti-gay groups and personalities are willing to put in this distortion about "legitimate scholars." At the very least, it will give a wonderful view as to how low they will stoop to lie.
Posted by BlackTsunami at 8:14 PM 1 comment:

One myth which the lgbt community perpetuates - and I despise with a passion - is that we are of the same mind and have the same knowledge of our community.

Unfortunately ignorance knows no sexual orientation, just as it knows no color, gender, religion, etc. We tend to be ignorant of each other because some of us are content with creating a bland stew of the lgbt identity. We are all different and embody all facets. With that in mind, enjoy the video below in which members of the bisexual community dispel myths and stereotypes about their orientation:

Posted by BlackTsunami at 2:56 PM No comments: 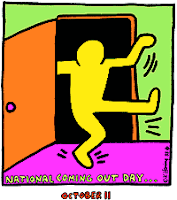 These Black LGBT People Reveal What Happened When They Came Out - Remember that coming out is also complex. It won't be all roses and music. I was fortunate. It ain't easy coming out as a black lgbt.

Gender Nonconforming Transgender People Face Greater Discrimination And Health Risks, Study Finds - Important to remember for two reasons - it is an issue which should be taken care of on its own. Also, anti-gay groups and personalities tend to cite studies such as this to claim that lgbts are susceptible to bad health but always omit how homophobia and discrimination play a great part in these health risks.

Importance of paid leave for trans patients - An issue which deserves a lot of attention.
Posted by BlackTsunami at 9:06 AM No comments: