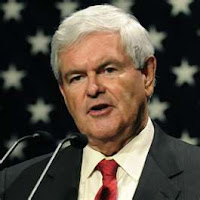 Of all the stories spinning about Newt Gingrich's victory in the SC Republican primary, the strangest has to be the congratulations he received from the National Organization for Marriage. From the NOM president Brian Brown, courtesy of the organization's blog:


It is now clear that the Republican Party will nominate a candidate who is strongly committed to preserving marriage as the union of one man and one woman," Brown said. "We have succeeded in making the preservation of marriage a key issue in this race, and we will continue to do so throughout the primary season, and into the general election against President Obama."

NOM is dancing in the streets because Gingrich was one of the candidates to sign it's silly "Marriage Pledge."

However, NOM seems to omit the simple fact  that Newt Gingrich is a man with sordid history of marriage rivaling that of Henry VIII of England.

He cheated on his first wife with his then second wife.

He cheated on his second wife with his now third wife. And this was going on while he was pursuing the impeachment of Bill Clinton chiefly because of indiscretions with Monica Lewinsky?

He also allegedly wanted an open marriage with his second wife because he felt that there was " more than enough Newt" to go around.

And I won't even mention the ugliness about the divorce proceedings during the cancer of his first wife.

The fact that NOM wraps its homophobic talons around Gingrich regardless of his controversial marital history speaks to the further lack of integrity of the organization's message. And makes one wonder does NOM really want to preserve marriage or keep it away from those allegedly "dirty homosexuals" regardless of assurances by former NOM head Maggie Gallagher that NOM is not interested in being anti-gay?

I mean come on. Are gays and lesbians really putting marriage in danger or does the danger truly lie with the fact that some folks - one who shall remain nameless - can't keep it in their pants.

It's obvious that if Gingrich is interested in, as NOM claims, preserving marriage as the union between one man and one woman, he seems to think that he is exempt from the rule.

And it's even more obvious that NOM's silence regarding his, shall we say, indiscretions is signalling that the organization is turning a blind eye to his past behavior.

I knew NOM was fake, highly hypocritical, and full of empty platitudes but DAMN!

Posted by BlackTsunami at 7:18 AM 6 comments: