Several religious right groups have been on a tear lately about the following:

A Fort Campbell lieutenant colonel’s email to subordinates regarding extremism and hate groups “inconsistent with Army Values” has raised the ire of evangelical Christians both locally and nationwide.

The message, which appears to have been generated by a single individual and not part of an Army-approved training program or command-generated memorandum, lists several state and national organizations with extensive support among the Christian conservative right – including the American Family Association and Family Research Council – as domestic hate groups. The email that set off the controversy last week was actually sent by Lt. Col. Jack L. Rich to officer and non-commissioned officer subordinates on Friday, Aug. 10, 2012.


Now when the Family Research Council, the American Family Association (two groups mentioned in the email), and their allies (which includes Fox News "cultural reporter" Todd Starnes) complain about this letter  - which they had been doing ad naseum, they claimed that the Rich was attacking "Christian" groups or ministries. Starnes even blames Obama and says he is "religiously cleansing" the military.

I have a feeling that we will be seeing and hearing more about this letter, so let's examine the crux of what it says. It talks about various hate groups, but I am willing to bet that the part which really gets FRC, AFA, and Starnes upset is as follows:

The religious right in America has employed a variety of strategies in its efforts to beat back the increasingly confident gay rights movement. One of those has been defamation. Many of its leaders have engaged in the crudest type of name-calling, describing LGBT people as “perverts” with “filthy habits” who seek to snatch the children of straight parents and “convert” them to gay sex. They have disseminated disparaging “facts” about gays that are simply untrue assertions that are remarkably reminiscent of the way white intellectuals and scientists once wrote about the “bestial” black man and his supposedly threatening sexuality.


For the life of me, I can understand why the Family Research Council and the American Family Association are upset. I mean it's not like they have used crude name-calling against the lgbt community:

Or linked gays to pedophilia:

Or spread disparaging and untrue assertions about gays:

Because if these things were true, then that would mean that their claim of being attacked because of their faith is a lie and a dodge created to obscure the point that Rich's letter was correct and they are anti-gay hate groups whose influence would damage the cohesiveness of our military force by exploiting the fears of heterosexual soldiers against their gay and lesbian fellow soldiers.

And it would mean that perhaps these groups and those who defend them (that especially includes Starnes) should worry less about Rich's letter and more about their definition of a "Christian" group or ministry because, unless I don't know my Bible, no Christian group lies, distorts, or bears false witness against any group, including gays.

Posted by BlackTsunami at 3:14 PM No comments: 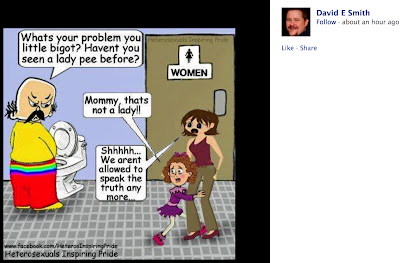 Want to know what 'Christian' group and leader is sharing this foul and very inaccurate graphic? Why the Illinois Family Institute.

French President Condemns Surge Of Homophobic Violence - As they move closer to passing marriage equality laws in France, homophobes are getting more and more violent and suddenly NOM is nowhere to be seen. I wonder why because Brian Brown and the group were all 'Viva La France' a little while ago.

Rick Scarborough: Christians Will Be Persecuted and Imprisoned if SCOTUS Legalizes Gay Marriage - Wasn't this supposed to happen with lgbt-inclusive hate crimes legislation?
Posted by BlackTsunami at 9:01 AM 2 comments:

Just damn humiliating. This recent anti-marriage equality protest in Minnesota was a huge failure and embarrassment for those in attendance. Even Focus on the Family's Glenn T. Stanton's appearance couldn't salvage it.