Not too many LGBTQ activists and leaders today know or remember Robert Knight. Decades ago, he was a spokesman of the anti-LGBTQ industry employed by such groups as the Family Research Council and Concerned Women for America.

His job was to appear in television interviews  or write "papers" and columns demonizing our community with claims he had to know were lies.

According to the Southern Poverty Law Center:

Robert Knight, a longtime conservative writer and journalist and major anti-LGBTQ propagandist, served as FRC’s director of cultural affairs from 1992 until 2002, when he went to Concerned Women for America (CWA). Knight later moved on to be a senior writer at Coral Ridge Ministries, which would later became Truth in Action Ministries and then D. James Kennedy Ministries. He is currently a senior fellow at the right-wing American Civil Rights Union.

During his years at FRC, Knight penned anti-gay tracts that used the research of thoroughly discredited psychologist Paul Cameron, head of the Colorado-based hate group the Family Research Institute. Knight authored numerous anti-LGBTQ papers, and even used Cameron’s infamous “gay obituary” study in testimony he offered before Congress to oppose the Employment Non-Discrimination Act (ENDA) in 1994. In his prepared statement on that topic, he said, “A study of more than 6,400 obituaries in homosexual publications reveals that homosexuals typically have far shorter life spans than the general population.” Cameron’s study has been thoroughly discredited for several reasons, one of which is its deeply flawed methodology.

When asked in 2004 about using Cameron’s work, Knight, by then with CWA, responded, “Yes, we have used his research. So what?” While at FRC, Knight also co-wrote (with Robert York, a former editor at Focus on the Family) a 1999 booklet with the attention-getting title of “Homosexual Behavior and Pedophilia.” Among its more remarkable claims was the baseless assertion that “one of the primary goals of the homosexual rights movement is to abolish all age of consent laws and to eventually recognize pedophiles as the ‘prophets’ of a new sexual order.” The same publication argued that the “homosexual rights movement has tried to distance itself from pedophilia, but only for public relations purposes.” The booklet has since disappeared from FRC’s website, but the organization has not withdrawn the claims it made.

I know personally that Knight blew off the question about using Cameron's discredited work because I was the person who asked him about it after a debate on the University of South Carolina's campus.

Knight does not spend all of his working time these days spreading falsehoods about the LGBTQ community. Instead, he spews a general overview of basic paranoia about how "the left" is trying to destroy American values. His latest piece, The Gaslighting of America, is par for the course as it is filled with anecdotal nonsense and right-wing talking points about how Joe Biden is attempting to create a "Marxist version of Sodom and Gomorrah" or how Black Lives Matters is a "Marxist" group which doesn't really care about black people because it doesn't talk about abortion.

Knight basically lists what he says are left-wing lies about issues, then takes it upon himself to supposedly refute them.  Such as this one (his words):

The Jan. 6 Capitol riot was an "armed insurrection" in which five died.

Reality: No guns were found. Only one person was actually killed – unarmed Trump supporter Ashli Babbitt. The media don't care who shot her.

Using the same methods of distortion he employed demonizing LGBTQ people as a full-time occupation, Knight underplays just how dangerous the January 6th insurrection was. Knight neglected to say that the Jan 6th rioters could still be considered armed because though those who invaded the Capitol may not have had guns, they had other weapons.

. . . a review of the federal charges against the alleged rioters shows that they did come armed, and with a variety of weapons: stun guns, pepper spray, baseball bats and flagpoles wielded as clubs. An additional suspect also allegedly planted pipe bombs by the headquarters of the Democratic and Republican parties the night before the riot and remains at large. Those weapons brought violence and chaos to the Capitol. Capitol Police officer Brian Sicknick died one day after two rioters allegedly sprayed him and other officers with what prosecutors describe as an "unknown chemical substance." Four other people in the crowd died in the insurrection, and more than 100 police officers suffered injuries, including cracked ribs, gouged eyes and shattered spinal disks.

As for Ashli Babbitt, she may have been unarmed but that doesn't mean she wasn't threatening. She helped to storm the Capitol and attempted to crawl through a barricaded door. She was shot after refusing to comply with order by police and the Secret Service to stop. Who shot her is irrelevant.
It's rather ironic that Knight highlights how Babbitt was unarmed while defending her. In 2012, he didn't give Trayvon Martin, the black teen shot and killed in Florida, the same courtesy or defense. At the time, he was too busy alluding to Martin's "problems with the law" while blaming the black community for its anger about his death.

Some would call Knight a phony and a giant hypocrite. But I guess when you have no problem citing bad studies from a discredited researcher (who also once claimed that gays stuff gerbils up their butts), you have the audacity to push any lie without blinking or fearing that lightning is going to strike you.

Posted by BlackTsunami at 5:09 PM 2 comments:

'It's on! GOP anti-transgender laws head to court' & other Tue midday news briefs 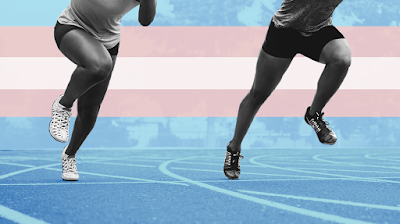 ‘This isn't the Olympics’: GOP transgender laws head to court - Like we knew they would be going. Keep fingers crossed.
LGBTQ Americans, like all people, are made in the divine image and deserve to be treated with dignity - Amen.
‘I was so lucky’: A gay son honors his dads lost to AIDS - Heartbreaking but awesome story about love and devotion.
Violent mob forces cancellation of Tbilisi Pride in Georgia - The struggle is real and it is global.
Biden nominates lesbian for ambassador-level post - Nice!
Posted by BlackTsunami at 8:49 AM No comments: