When giving an example of just how hateful and vindictive some members of the anti-LGBTQ industry are, many LGBTQs - particularly myself - will point to American Family Association personality Bryan Fischer.  Fischer used to be a spokesperson of the group, but he was turned out when his comments finally caused the group a tremendous amount of ire. What could one expect from comments linking gays to the rise of Nazis, claiming that the Constitution only protects Christians, or comparing black people to rabbits.

Fischer is still linked with AFA, from his radio show to published pieces for the group's fake news site,  One News Now. And thanks to that, we can add another adjective to describe Fisher:

Recently, he recounted the sad story of Lisa Miller and Janet Jenkins, a lesbian couple who agreed to raise a child together. Miller decided that she was not a lesbian and sought to keep Jenkins away from the child, Isabella. The two went back and forth in the court system with Jenkins winning the right to see her daughter and eventually gaining custody. However Miller, with the help of members of the anti-LGBTQ industry, fled the country with the child in 2012 and Jenkins has not seen her since.

The situation continues to reverberate. In 2017, religious right activist Philip Zodhiates was sentenced to a three year jail sentence for helping Miller flee the country. Fischer sought to defend Zodhiates' actions as well as his own during the controversy.

..  . a second man, Philip Zodhiates, has been convicted of “an international kidnapping” for his alleged role in helping Lisa’s daughter escape the prison house of lesbianism and make it to safety in Central America.

My sympathies are entirely with the now Christian mother who repented of her homosexuality and also with the two Christian men in this circumstance.

The left came unhinged and accused me of supporting kidnapping raids on homosexual households to snatch children from their beds.

I, of course, have suggested no such thing.


Fischer, of course, is creating a careful deception. While it true, that he never said anything about "supporting kidnapping raids on homosexual households to snatch children from their beds," he said the following: 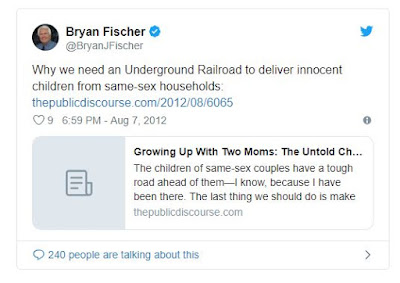 Fischer can attempt to create a distracting argument about his exact words, but no one should be fooled. He did in fact advocate kidnapping children if they lived in same-sex households.

Nice try, Fischer. But the internet is forever.

Posted by BlackTsunami at 4:52 PM No comments: