We knew it would happen.

The news that the Kellogg company is partnering with GLAAD to combat bullying via a specially made cereal has reached the religious right and of course they are angry about it. I will spare you the article from the "news" site One News Now.

But I will showcase the comical poll the article featured: 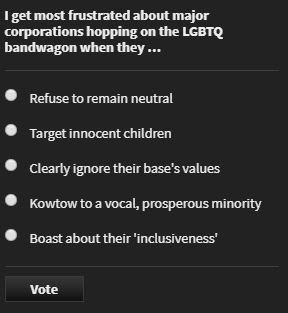 As you can see, the poll is a bunch of comical, self-righteous nonsense. I particularly find them thinking  that the LGBTQ community is "vocal" and "prosperous" very amusing. I really get a kick out of the idea that the religious right considers itself as Kellogg's base, as if liberals, progressives, and members of the LGBTQ community don''t buy the company's products.

Which choice do you think is in the lead? It's easy to guess: 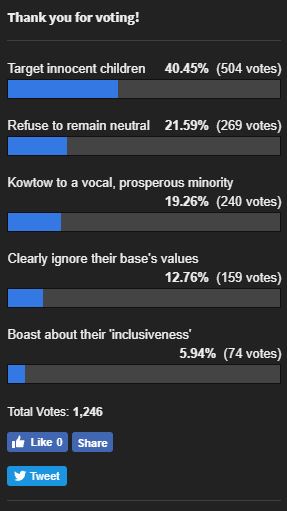 Was there any doubt? It always comes back to the "gays are recruiting/indoctrinating children" lie. Too bad there wasn't a question about gay sex.
Posted by BlackTsunami at 5:26 PM No comments:


Nothing Will Persuade White Evangelicals to Support Impeachment - And I am not surprised. If he goes down, let them go down with him.

A new poll finds strong support for the Supreme Court ending LGBTQ discrimination - To me, that means a win or a lose with both help the LGBTQ community in the long run. But I still want a win.

2019 marks the 40th anniversary of the White Night Riot. “He got away with murder!” - An ugly and sad bit of history which accentuated the rage of a community who frankly had enough  disrespect thrown at us  when one of our prominent heroes - Harvey Milk - was murdered and the killer got away with a light sentence.
Posted by BlackTsunami at 8:36 AM No comments: