Bob Vander Plaats of the group The FAMiLY Leader was another person who made GLAAD's Commentator Accountability Project (CAP) and this video by Think Progress demonstrates why.

And it's a video coming just in time, too. According to Think Progress:

The FAMiLY Leader and its president, Bob Vander Plaats, intend to hold a rally in the Iowa state Capitol tomorrow pressuring the state legislature to take up an amendment to the Iowa constitution defining marriage solely as between a man and a woman. Along with other groups including CatholicVote.org and the National Organization for marriage, the Leader has been promoting the policy change since the Iowa Supreme Court declared in 2009 that a state law prohibiting same-sex marriage was unconstitutional. In conjunction with the rally, the groups expect to deliver a petition with over 20,000 signatures supporting the amendment. The involvement of Vander Plaats in the event is especially noteworthy, as his extremism in Iowa state politics has increasingly driven even fellow Republicans and social conservatives to distance themselves from him.

Posted by BlackTsunami at 2:57 PM 3 comments:

First, a little comedy for your Monday. I DO NOT condone doing this in front of Tony Perkins, Peter Sprigg, Brian Brown, or Peter LaBarbera (who will probably take pictures). However, in front of a wacky fundamentalist preacher seeking to disrupt college campuses, have at it:

NOM's 'elect Storobin' extremism: This time with added element of deception - Batten down the hatches cause NOM is implying the "gays are corrupting children" lie again.

Pastor Dennis Terry Introduces Rick Santorum, Tells Liberals and Non-Christians to 'Get Out' of America - See what happens when certain people calling themselves Christians boggart the conversation in America regarding religion.


Today: Two #GLAADcap listees discuss 'ex-gay' advocacy, self-victimization - GLAAD's list has the religious right on the run. They are trying to tell the media to avoid it. Hmmmmm. I wonder if Peter Sprigg will mention the tweet I sent him this morning congratulating him on making the list and telling him that I look forward to using it against him.

Posted by BlackTsunami at 9:11 AM 4 comments:

On Sunday during an interview with The Christian Post concerning the Tyler Clementi case, Family Research Council leader Tony Perkins made a comment which should lead many of us gay bloggers to scratch our heads with amazement:

"Some have even laid blame not on the actual bullies but on Christian churches and conservative politicians. It's wrong to politicize these tragedies. Instead, we should focus on preventing the bullying of young people – for their sexual orientation, appearance, religion, or any other reason."

Perkins was claiming that the lgbtq community would use the verdict of this case ( Former Rutgers University student Dharun Ravi was convicted Friday of anti-gay intimidation for using a webcam to spy on his gay roommate's love life. The roommate, 18-year-old Tyler Clementi, committed suicide after realizing that he had been watched) to supposedly push an alleged "gay agenda" (whatever that is).

Instead, the organization  nd Perkins have been extremely vocal  and active in opposing anti-bullying programs which would include the lgbtq community.

In August of last year, Perkins made very negative comments about the "It Gets Better" campaign, a campaign in which gay leaders and allies of the lgbtq community created videos telling gay youth to not allow bullies to bring down their self esteem.

In the following letter, Perkins called the campaign "disgusting" and an attempt to "recruit children into the gay lifestyle:" 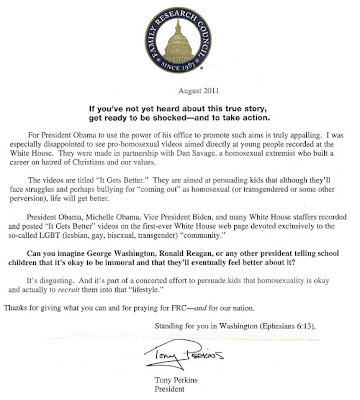 In June 2011, FRC issued a public prayer to God that efforts by Health and Human Services to combat the bullying of gay youth would fail:

• May God help us to not to "bully" anyone, but to graciously yet urgently speak the truth in love to young people who are hurting themselves with the "LGBT" lifestyle. May believers across America not be "bullied" by our government's efforts to promote harmful and sinful sexual practices among our youth and instead determine to stand courageously against these misguided efforts which can only lead to God's judgment!

In general, according to People for the American Way, FRC has been a strong opponent of programs which would prevent the bullying of gay students:

The Family Research Council is a major propagator of the falsehood that bullying prevention initiatives are attempts by gay rights activists to “recruit” students, and lobbies states to pass laws curbing students from joining Gay-Straight Alliance clubs. Peter Sprigg, FRC’s senior fellow of public policy, authored a booklet on how the “pro-homosexual movement” is “indoctrinating impressionable school children” through safe schools initiatives and anti-discrimination rules. He regularly criticizes organizations like the Gay, Lesbian, and Straight Education Network (GLSEN), which helps formulate safe schools programs, for allegedly trying to “promote a homosexual agenda in schools.”

But words don't mean anything. If Perkins is truly sincere about protecting gay youth from bullying then he and his organization should stop creating road blocks to this effort.

And we all know that isn't about to happen.

Posted by BlackTsunami at 4:39 AM 3 comments: