Meet the angriest Donald Trump supporter of them all

Forget Melissa Carone because she is past news compared to this very angry Trump supporter.

She calls herself realTina40 and at first you may think she's pulling a huge performance art game. But she is real. Loud, profane, vulgar, dripping with anger and conspiracy theories about the recent presidential election, but very very real. She even has a site selling swag, which I will not link to.

However, if you think you've seen all kinds of Trump supporters there are, I guarantee that you haven't until you hear Ms. Tina rant and rave. As you can tell should you watch the tweet below, her videos are generally filled with so much profanity that some can't be embedded and can only be watched on Youtube.

Girlfriend was obviously born in a "cussing household." Either way, I find her hilarious from a campy point of view.

She seems really angry. This seems not great. 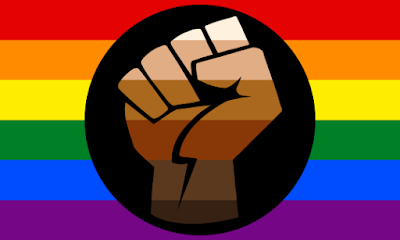 4 Teachers Suspended For Homophobic Comments About Lesbian Coworker - Talked about the teacher AND her child. Y'all gotta go! It wasn't that much of a punishment but the politics of high school is always harsh.
Pennsylvania radio host calls trans health secretary a “freak show” in disgusting on-air tirade - Unfortunately, trash people like this still exist. That's something we shouldn't ever forget.
Pete Buttigieg Is Nation's First Out Presidential Cabinet Nominee - Just in case you didn't hear.
Presence vs. representation: Report breaks down LGBTQ visibility on TV - Interesting article.
Posted by BlackTsunami at 9:05 AM No comments: