Trans worker wins $50K in settlement over job bias - That's right, honey. You take that money and you deserve every penny of it.


Mark Regnerus to join ADF at UN event - After his faulty anti-parenting study was destroyed, dissected, and devastated, I guess Mark Regnerus is now saying "to heck with integrity. show me the money."

Orson Scott Card's New Job On North Carolina Public TV Board Comes Under Fire - Who thought of putting this bozo on public tv board.
Posted by BlackTsunami at 9:03 AM No comments: 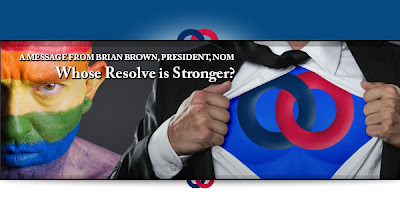 The following graphic is by the National Organization for Marriage in its latest fundraising appeal. My guess is that NOM meant for it to show the lgbt community as menacing warriors, but I don't take it as that.

The graphic doesn't insult me. On the other hand, it empowers me. I see it as typifying a community who was beset with anti-marriage equality fever in 2004 and suffered many losses from the Prop 8 vote in California to many smaller but nonethless equally bruising battles.

However, the lgbt never lost our resolve. We never allowed ourselves to succumb to defeat. No matter how many times we were beaten and Maggie Gallagher or Brian Brown would mock us, we never gave up. We - in the words of a famous pro wrestler whom I adore - "sweat, bleed, and paid the price."

And now, we are where we need to be. Not where we want to be, but at a much better place than where we were.

So no, NOM's graphic depicting the lgbt community as menacing warriors don't insult me and it shouldn't insult anyone else in the community.

We should own up to the distinction with pride. Hell, we earned it.
Posted by BlackTsunami at 4:50 AM 2 comments: